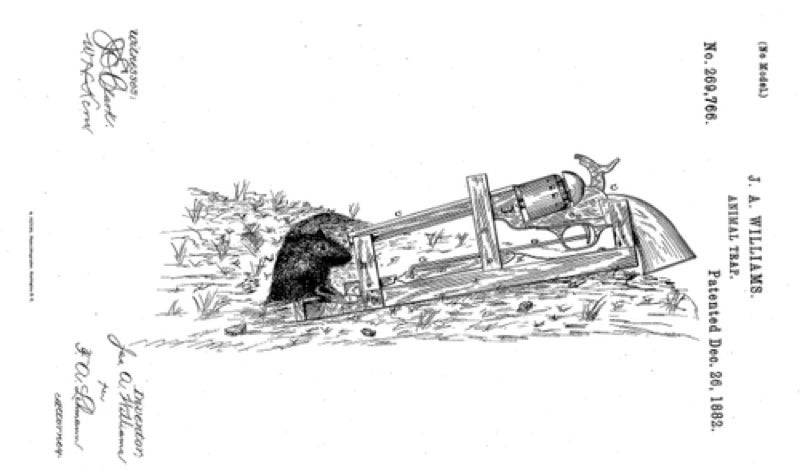 Ralph Waldo Emerson once advised, "Build a better mousetrap and the world will beat a path to your door." The world would have been in for a bit of a shock if they'd found themselves at the door of one J.E. Bennett of Fredonia, Texas in 1882. That's the year he patented the mousetrap pictured above.

Some form of mousetrap has been around since at least the Ancient Greeks: The Battle of Frogs and Mice references a "wooden snare, a destroyer of mice, which they call a trap." But the classic spring-loaded variety was the brainchild of William C. Hooker, who was awarded the patent in 1894.

Bennett's 50-calibre model seems to be of the spring-loaded variety, and predates Hooker's patent by 12 years; I'm guessing it never really caught on. Maybe it was the addition of a "revolver or pistol" attached to the frame people found daunting. He wrote in his patent application that he wanted a trap that could destroy burrowing rodents in particular. He also thought it would make a nifty house alarm: "This invention may also be used in connection with a door or window, so as to kill any person or thing opening the door or window to which it is attached."

Only in Texas... where the mice live in fear.