These Freezing Drops Of Oil Are Hypnotically Beautiful 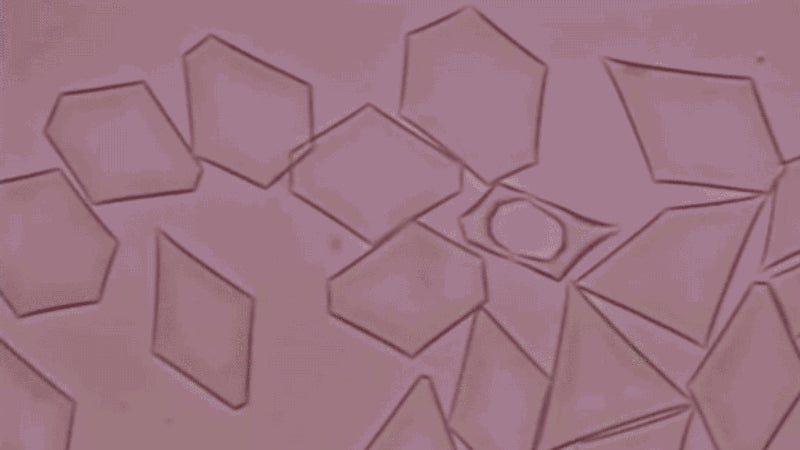 An international team of researchers has shown that specially treated drops of oily chemicals can take on bizarre shapes and structures during the freezing process. These insights could allow us to create artificial structures with very life-like properties.

By using a relatively simple bottom-up approach, a joint research team from Cambridge University and Sofia University in Bulgaria demonstrated that liquid droplets of oil, when put in a soapy water solution and slowly frozen, form "plastic crystal" phases on their inside surfaces. This process caused the droplets to shape-shift into a surprising variety of forms, ranging from octahedrons and hexagons to triangles and fibres.

The results of their work has been published in Nature. And here's a fascinating video:

"There are many ways that non-biological things take shape," noted lead researcher Stoyan Smoukov from Cambridge's Department of Materials Science & Metallurgy, in a statement. "But the question is what drives the process and how to control it — and what are the links between the process in the biological and the non-biological world?"

The new research points to "morphogenesis" as a possible answer to these questions. This idea goes back to the 1950s, when Alan Turing proposed that morphogenesis is the result of local chemical reactions that cause a substance to spread through space. As this research shows, Turing was clearly on to something.

By slowly freezing liquid drops of oily hexadecane floating on soapy water, the researchers coaxed the droplets into shifting through a variety of crystal-like forms. What's more, the droplets also shifted back to their original shapes, when the solution was re-warmed. 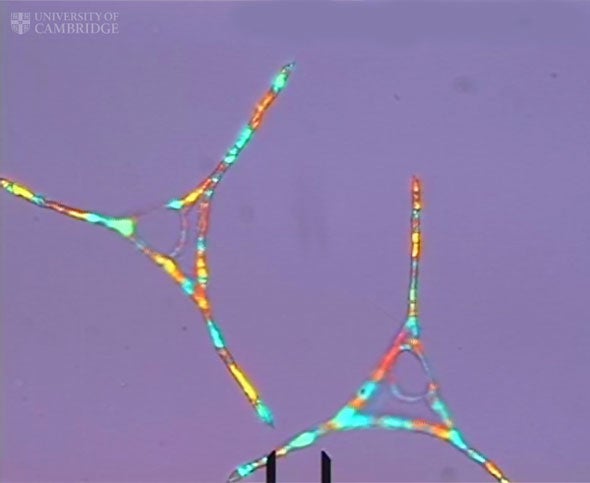 This self-assembling process is driven by a crystal phase, or wax-like layer, that forms beneath the surface of the droplets, and is likely controlled by the physical properties of the materials themselves. Smoukov explains:

These insights could eventually help scientists and engineers create artificial structures with the same kind of control and complexity as biological systems. Novel and complex structures could be built from simple components, with potential applications in drug development, paints, cosmetics, and household products like shampoo.

"It's curious to observe such life-like behaviour in a non-living thing — in many cases, artificial objects can look more 'alive' than living ones," said Smoukov.

Read the entire study at Nature: "Self-shaping of oil droplets via the formation of intermediate rotator phases upon cooling".