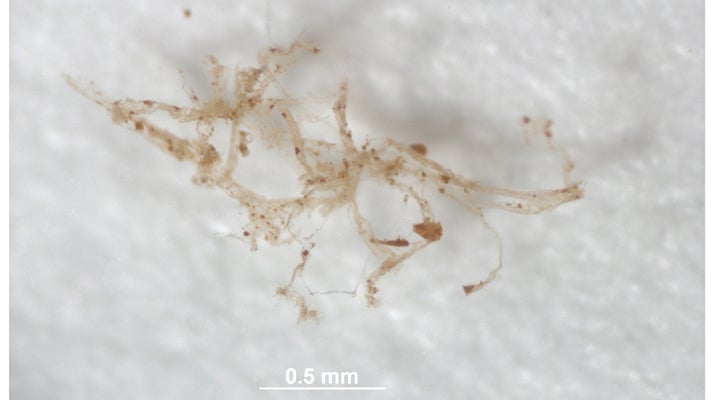 For the first time, paleontologists have isolated original blood vessels from a dinosaur. You're looking at the tattered fragments of the structures that channeled blood through the legs of Brachylophosaurus canadensis, a 9m-long hadrosaur that roamed Montana 80 million years ago.

The vessels were isolated by molecular paleontologist Tim Cleland, a post-doc at the University of Texas at Austin. A few years back while he was a grad student at NC State, he had the honour of dunking chunks of hadrosaur leg bone in strong acid to remove all minerals and recover soft-tissue structures. The beige strands shown above are one of the structures that remained after demineralization — but at first, it wasn't clear whether they represented blood vessels from the original dinosaur, or some sort of bacterial or fungal colonist.

To find out, Cleland and his co-authors analysed the structures using high resolution mass spectrometry, which separates molecules by weight, and immunofluorescence, which uses antibodies to detect specific proteins. In results published last week in the Journal of Proteome Research, the researchers successfully identified peptide sequences belonging to myosin, a protein found in smooth muscles associated with the walls of blood vessels. To validate the find, they repeated their procedures on the bones of several modern-day dino descendants, including chickens and ostriches. Sure enough, they discovered very similar peptides.

Other paleontologists working with T. Rex bone samples isolated what appeared to be blood vessels in 2005. But these early findings were controversial: nobody could confirm the structures' suspected origin or say whether the vessels had been altered from their original state. As Elena Schroeter, a co-author on the new study, put it to Gizmodo in an email, "shape and size alone are not enough to say conclusively what these structures are." Peptide sequences from proteins that are known to be associated with modern blood vessels offer the first definitive proof.

"Finding these blood vessels and other soft tissue structures (bone cells and bone matrix) was a big surprise when originally found in 2005 from a Tyrannosaurus rex," Cleland told Gizmodo. "But through further efforts of our own and other researchers, we have found that these soft tissues are present in many more fossils than previously expected, including fossil bone from around the world."

"Additionally, the peptides that we found can provide future studies with a baseline for what types of proteins can preserve in the rock record," Cleland said. "We can begin to ask new questions about how proteins preserve and how they break down over time. We are just scratching the surface of the kinds of questions that fossil proteins can help us answer."