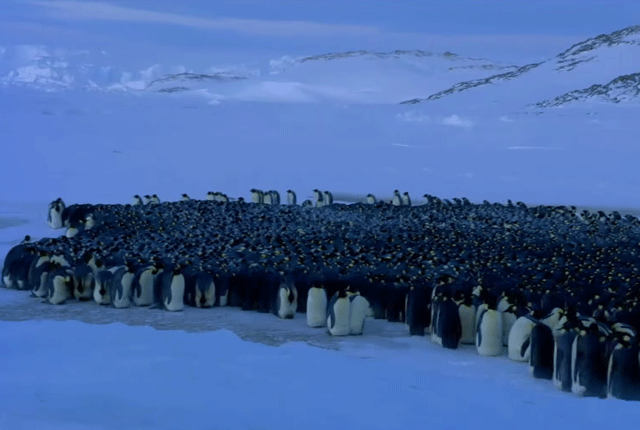 Emperor penguins huddle together for warmth during those punishing Antarctic storms, taking turns being at the centre of the huddle. The social dynamics behind those huddles turns out to more complicated than previously thought.

Researchers at the University of Strasbourg in France studied 3000 breeding pairs of penguins in the Pointe Geologie Archipelago colony in Antarctica during the 2005, 2006 and 2008 seasons. They just published their results in the latest issue of the journal Animal Behaviour. Most notably, they found that it only takes a single penguin leaving the huddle to cause it to break apart.

That's in keeping with earlier work on how a single penguin can set off a "travelling wave" through the huddle. A few years ago, Daniel Zitterbart was in Antarctica conducting seismology research when he noted the huddling behaviour of male emperor penguins, tasked with incubating the colony's eggs. He thought it looked a lot like cell dynamics, so he videotaped the huddles and studied the time-lapsed footage when he returned home to the Alfred Wegener Institute in Germany. He found that huddled penguins don't stand completely still. They move every minute or so, and when they do, all their nearest neighbours move with them.

Zitterbart likened the behaviour to a travelling wave. Huddled emperor penguins move in similar patterns as heavy traffic inching along the freeway. When he adapted traffic flow models to the penguins' behaviour, he found that any given penguin can trigger a travelling wave; all it needs to do is step about 2cm in any direction, and all its closest neighbours will do the same. He speculated that this so-called "threshold distance" is related to the animal's layer of feathers: it's twice as thick, allowing the huddle to pack together as densely as possible for warmth without crushing that feathery insulation.

Given the bone-chilling temperatures the harsh Antarctic environment can reach, you'd think that once penguins get into a good warm huddle, they'd stay there. Instead, it seems that most huddles don't last that long, according to Strasbourg scientist Andre Ancel, lead author on the latest study. He and his colleagues found that while some huddles held formation for several hours, others lasted just 10 minutes or so. On average, the huddles would break up around the 50-minute mark.

Why? It might have something to do with dispersing all that pent-up heat. It makes sense when you think about how the heat from all those penguin bodies must be building up, especially at the centre of the huddle. Ancel et al. estimate that temperatures can be as high as 37C in there — a bit too toasty for a penguin's comfort. In fact, "The breakup of huddles is sometimes accompanied by a haze of warm air rising over the colony, which indicates a significant dissipation of heat," Ancel et al. write. They even observed some penguins eating snow after getting out of the huddle, presumably to cool off faster.

So the penguin at the centre of the huddle doesn't really have the sweetest spot, at least not once the heat starts to build. Yet the Strasbourg scientists found that while it only took one penguin to start a chain reaction that broke up the huddle — or, in one memorable case, two penguins getting into a fight — that penguin was rarely the one in the centre. Usually it was a penguin on the edge of the huddle that peeled away first.