Star Wars: These Could Be The Real-Life Droids We’re Looking For

The droids in the Star Wars universe often play a key role in the movies. But how close are they to some of the real robots in our own universe? Professor Jonathan Roberts from the Queensland University of Technology drops his science on those assembled…

The latest episode of Star Wars is now upon us and has unleashed a new era of science fantasy robots, or “droids” as they are known.

One of the heroes of the new movie The Force Awakens is BB-8, a cute but capable spherical droid that is at the centre of the story (sorry, no spoilers).

But droids have been at the heart of the epic science fantasy saga since the original Star Wars movie back in 1977, when C-3PO uttered the immortal words:

I am C-3PO, human-cyborg relations. And this is my counterpart R2-D2.

Star Wars has always been a droid story, just as much as a story about the Skywalker family.

Even though we all know that Star Wars happened a long time ago, in a galaxy far, far away, just how good has it been a predicting the usefulness and development of robots on our own planet today?

For those non-Star Wars experts reading this, R2-D2 is an R-series astromech droid. Such droids work on spaceships and are particularly good at working outside in the vacuum of space. They are the mechanics of space travel and are packed with tools and know-how to fix things. They also seem to be fully waterproof, can fly short distances using deployable thrusters and somehow possess a cheeky character.

But did you know that working in orbit around Earth right now is NASA’s Robonaut 2, also known as R2. It is one of the International Space Station’s test bed droids, having a humanoid shape and proportions so that it can undertake maintenance tasks originally designed for human astronauts. 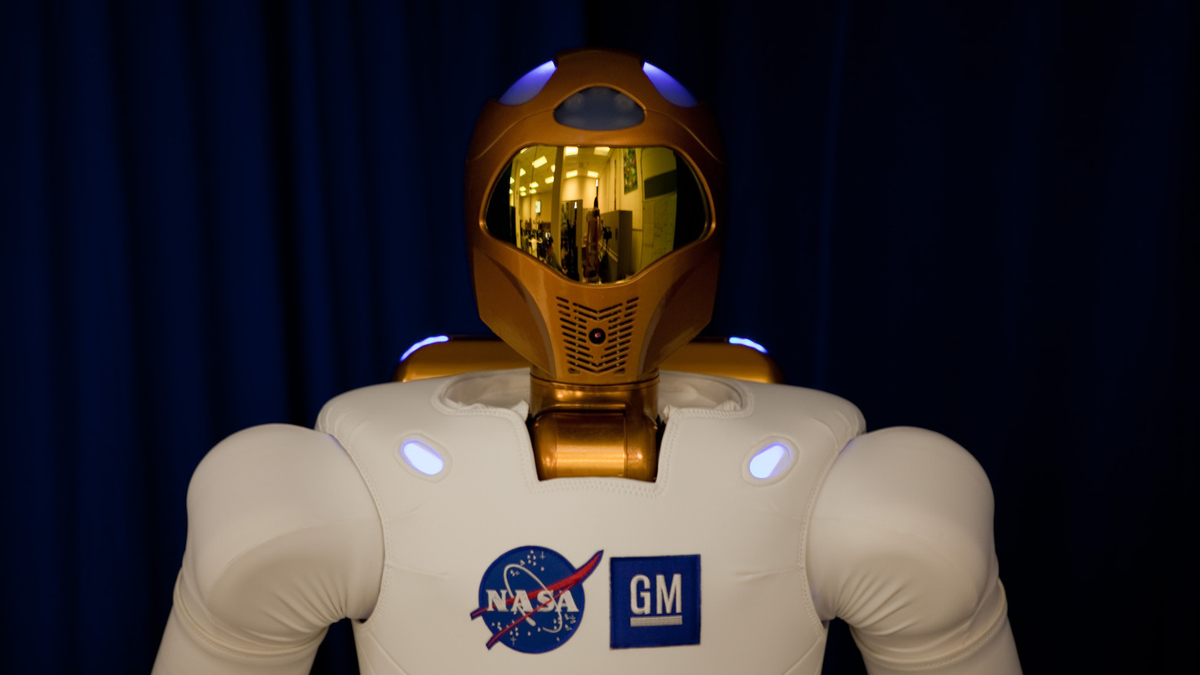 Robonaut2 – or R2 for short – from NASA and General Motors, is a robot designed to work side-by-side with people in difficult or dangerous places on Earth and in space.

Perhaps in the future, when all spaceship maintenance will be performed by droids, this real R2 unit will replace the humanoid form.

The golden humanoid C-3PO is a protocol droid fluent in more than six million forms of communication. A protocol droid’s primary purpose in Star Wars is to help non-droids, creatures of all kinds, communicate with one another and generally avoid potentially dangerous misunderstandings.

If there were protocol droids in Mos Eisley’s Cantina then maybe no-one would have shot first! But as the bartender said of R2-D2 and C-3PO: “We don’t serve their kind here.”

We have human diplomats in our world to negotiate and attempt to head off conflict, and there seems no need for a mechanical interface such as a protocol droid.

But we are seeing translation apps on our phones and their accuracy is improving to the point where it is conceivable that live language translation between two people speaking to one another may not be too far away. Until we find non-human sentient equals then there will be few diplomatic jobs for C-3PO-like droids here on earth.

A place that we are likely to see humanoid robots like C-3PO is as artificial companions and carers. The advantage of a humanoid robot is that it should be able to cope in our homes or care facilities as they have all been designed for humans.

This is one of the great advantages of the humanoid robot form, although there is the so-called “uncanny valley” to deal with and the feeling by some that we should always ensure people have a human touch.

A way of thinking about the dozens of droids of Star Wars is to classify them by how they are used. We have seen them being used in applications as diverse as farming, medicine, war, torture and space exploration.

When R2-D2 and C-3PO escape Darth Vader and land in their escape pod on the sand plant of Tatooine, they are picked up by the Jawas scavenging for droids to sell to local moisture farmers. The lack of labour on Tatooine results in droids being critical for the functioning of the farms.

Note to non-Star Wars experts: Darth Vader himself, or the least a young Anakin Skywalker, built C-3PO on Tatooine from spare parts.

In the past year alone, very capable agricultural robots have been demonstrated by Queensland University of Technology, The University of Sydney and by Swarm Farm Robotics.

Many other research organisations and companies are developing agricultural robotics as a way of overcoming labour availability issues, reducing the cost of inputs such as diesel and herbicide, and enabling the use of smaller machines that compact the soil less than the large tractors we see commonly used today.

In the Star Wars movies, medical droids appear at critical moments. The medical droids 2-1B and FX-7 twice patched up Luke in The Empire Strikes Back. Once when he survived the Wampa attack on Hoth and then again at the end when they grafted on a robotic hand to Luke after his father sliced it off.

Similar Imperial DD-13 medical droids created the droid-like Darth Vader from his battered body following his light sabre duel with Obi Wan on the volcanic plant Mustafar in Revenge of the Sith.

An EW-3 midwife droid even helped Padmé give birth to the twins Luke and Leia just prior to her tragic death.

Here on Earth, Google has been talking about its plans for new medical robots. It’s teaming up with medical device companies to develop new robotic assistants for minimally invasive surgery.

Medical robotic assistants have already become a common sight in well-equipped modern hospitals and are being used to help surgeons during urology procedures and more recently for knee replacements. New research is also showing how novel tentacle-like robot arms may be used to get to difficult to reach places.

The hope is that medical robotics will enable shorter training times for surgeons, lengthen a surgeon’s career and improve outcomes for patients. All these benefits could drive the cost of these procedures down, giving access to more people around the world.

Unsurprisingly, there are many droids in the Star Wars universe dedicated to killing. In Episodes I-III, the Trade Federation used droid starfighters. These were spaceships that were droids themselves and the droid command ships housed thousands of them.

The Trade Federation were also fans of deploying thousands of humanoid shaped B1 Battle Droids. Although they were relatively well equipped, they seemed stupid and were even worse shots than Stormtroopers. The far more capable Destroyer Droids had deflector shields and rapid fire laser cannons.

Killer robots and their development is a hot topic right now on Earth. A campaign has been started with the aim of developing arms controls and some killer robots have already been deployed.

In the Middle East, drones are routinely used to deliver missiles. These are human controlled and are not autonomous but they are changing the face of conflict.

In the DMZ between the Koreas you will find fully autonomous robots equipped with heavy duty, long-range machine guns. If they spot movement in the DMZ they are capable of firing. There is no need for a human in the command chain. They are real Destroyer Droids. 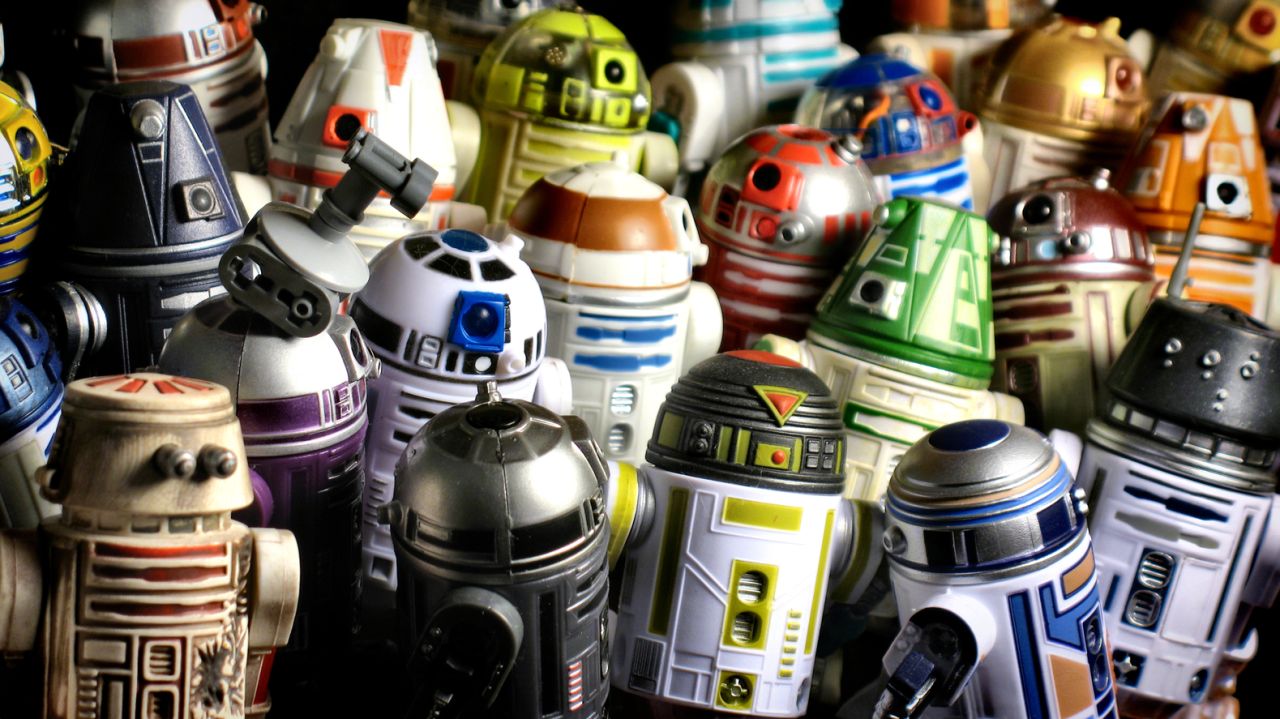 Are these the utility droids you’re looking for? (Flickr/donsolo, CC BY-NC-SA)

Even though we can see many examples of how the droids of Star Wars may have inspired the design of the robots of today, there is one major missing piece of technology that means our robots are nothing like a Star Wars droid. And that is the almost complete lack of reliable and capable artificial intelligence in our robots.

Nearly all of the human created robots that I have mentioned rely entirely on a human expert to either control them remotely or program them to do a small range of very specific tasks. The robots that we have today are not very autonomous.

Most of them cannot see, and even if they could, engineers have yet to develop artificial intelligence to the point where a robot by itself could solve a meaningful problem it may encounter in the world.

Really smart robots are coming and many people are working hard to tackle the challenges but we are not likely to see general-purpose droids in the near future. We have a long time to go, and are far, far away from welcoming cute robot companions such as R2-D2 and BB-8 into our homes and workplaces. Until then, let’s just all enjoy Star Wars.

This article was originally published on The Conversation.