On the day after Christmas, the largest container ship to call at a US port will stop by the Port of Los Angeles, the largest port in the US. But it's largely just a PR event: Like many US ports, the Port of LA is not completely ready to welcome this size megaship, which will soon be standard on the high seas.

That's a big problem. Larger, newer, more emissions-friendly ships are good news for many environmental reasons, and could vastly improve economic prospects for global trade — but not unless cities are prepared to handle them.

The Benjamin Franklin was deployed earlier this month as a 18,000 TEU ship (TEU, or twenty-foot equivalent, is basically the number of shipping containers), one of the biggest on the ocean. But this particular ship isn't a one-hit wonder: The 396m long megaship from the company CMA CGM is part of a new breed of supersized container ships called ultra-large container vessels (ULCVs) that are soon to be commonplace on many US-Asia routes. Some new ships are as large as 20,000 TEUs. 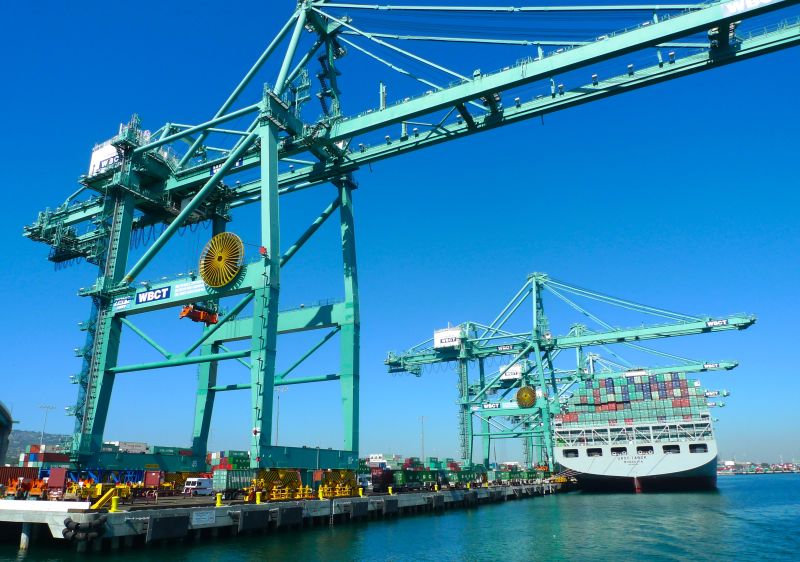 Some ports have been getting ready by undergoing some intense upgrades. The Port of LA has already added little yellow crane extenders — basically lifts in its shoes — to be able to hoist containers higher, and dredging its channel to allow safe passage of these "deep-draft" vessels (in fact, the port got an additional $US1.2 ($2) billion for more dredging just this week).

But just the terminal improvements likely aren't enough to actually unload the cargo efficiently, according to analysts at the maritime research group Drewry that were published by Container Insight Weekly. There needs to be a massive systemic upgrade, from railway infrastructure to crane automation that can support the increased volume of containers:

"Introducing too many ultra-large container vessels (ULCVs) to the West Coast ports before they are fully ready would most likely worsen productivity, rather than improve matters, and could add days to the load and discharge time for boxes at terminals, thus undermining the USWC's competitiveness versus the USEC," Drewry noted.

Those abbreviations in the last line means exactly what you think they do — that ports on the West Coast might start to lose out to East Coast ports, especially now that some ships can take a recently deepened, widened Panama Canal. This also could create trouble for LA especially — right now the largest port in the Western Hemisphere — which could quickly see its business shift to another West Coast port if their improvements beat LA's to the punch. And this all might happen sooner than we think. After saying hi to LA, the Benjamin Franklin will head north to the Port of Oakland, which has already spent millions raising its cranes and dredging its channel, too. Watch your back, LA! The megaship will dock in Oakland on Christmas Eve.