Perhaps in your daily internet wanderings you've stumbled across photos of this building and wondered, what the hell is that thing? Well, it's a museum for cars, and I assure you: It's perfect.

The overhauled Petersen Automotive Museum, which opened last week in Los Angeles, has become LA's most contentious piece of urban design. It's already drawn comparisons to Guy Fieri and Michael Bay, which might actually be a selling point for the core audience that comes to see its collection of vintage and movie prop cars. Let's be honest: Dudes in Hawaiian shirts gawking at the Batmobile are not here for the architecture.

But I was. Like the Broad Museum, which opened earlier this year about 10km east, the Petersen is draped in a similarly polarising façade. Sure, the Broad is high-concept where the Petersen is populist, but they actually have a lot more in common than it appears: They're simple boxes slapped with Instagram-ready gift wrap. It's part of a trend in recent years for LA cultural institutions to wrestle their way into the social media chatter with an architectural style let's call Wacky Packages. It's even happening right across the street, where the Los Angeles County Museum of Art's plotting to ooze primordial goo over Wilshire. 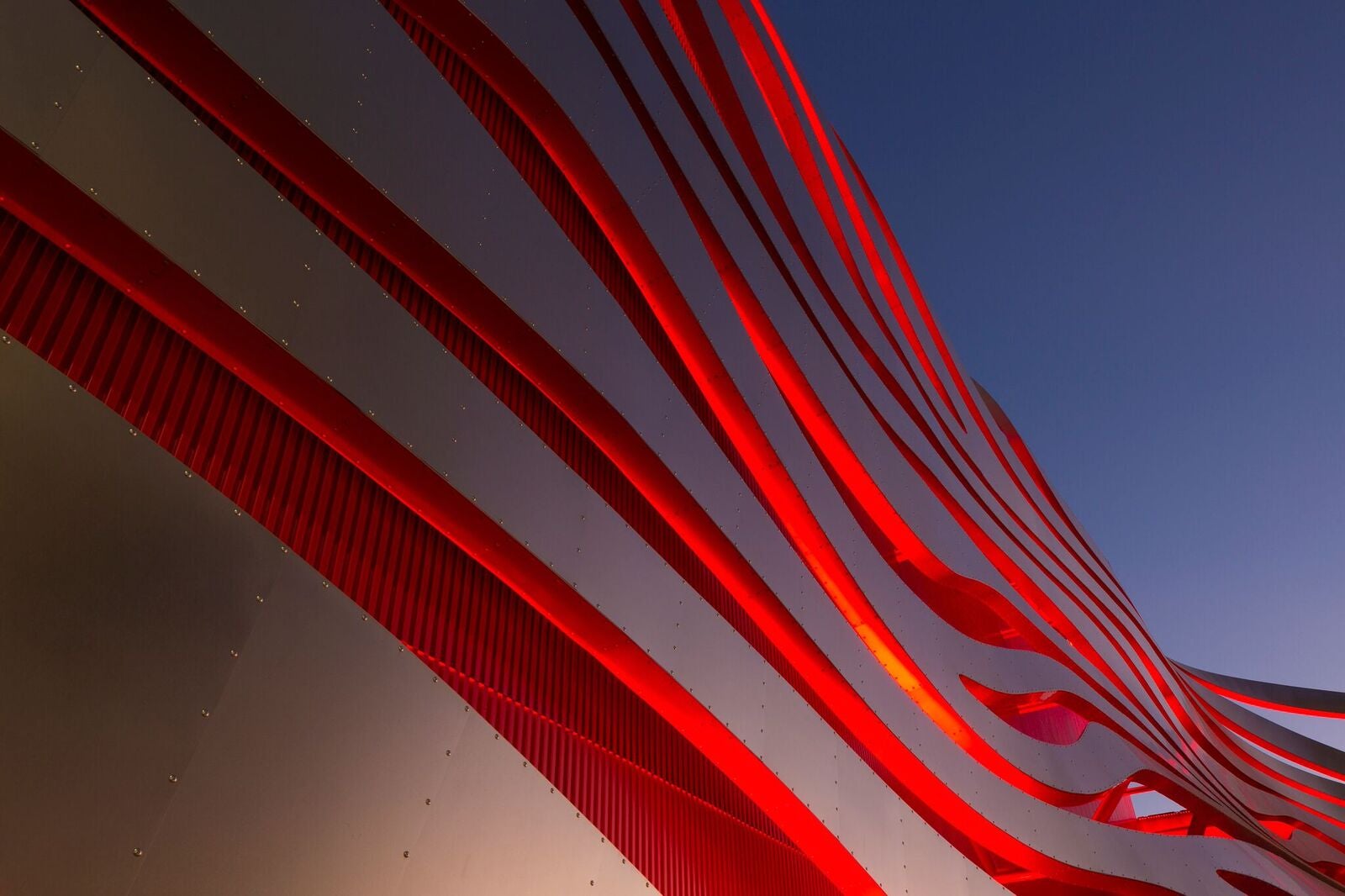 While it might be a trend, it's not really a new idea for Los Angeles, which invented the drive-by design known as programmatic architecture, where buildings looked like what was happening inside to quickly communicate their relevance to people zipping past in automobiles. You'd think this would be an excellent chance to riff on, or perhaps reinvent, this LA concept for this particular museum, but when it comes to the Petersen's new look, it's not immediately clear to most people what's going on inside. The Petersen looks less like mobility-in-motion and more like an ambiguously unspooled Diet Coke can. From the right angle you might get a whiff of chrome. The previous incarnation of the museum, with its tailfin-like appendages, was a bit more obvious.

What is obvious is that the Petersen wanted to make a splash. And if so, then the Petersen made a very odd choice with the architectural firm of Kohn Pedersen Fox, which is known for much more conservative work. But for this project they went full Wacky. At the press event, principal Eugene Kohn claimed the zany scribbles were abstract takes on aerodynamic testing in wind tunnels and the blur of brake lights, to which the audience tilted its heads to the side in unison and said "huh". Only the chef of the museum's restaurant, Celestino Drago, who was standing near the stage prepping for a cooking demonstration, was brave enough to ask Kohn where his inspiration truly originated: "So, how much wine did it take?" 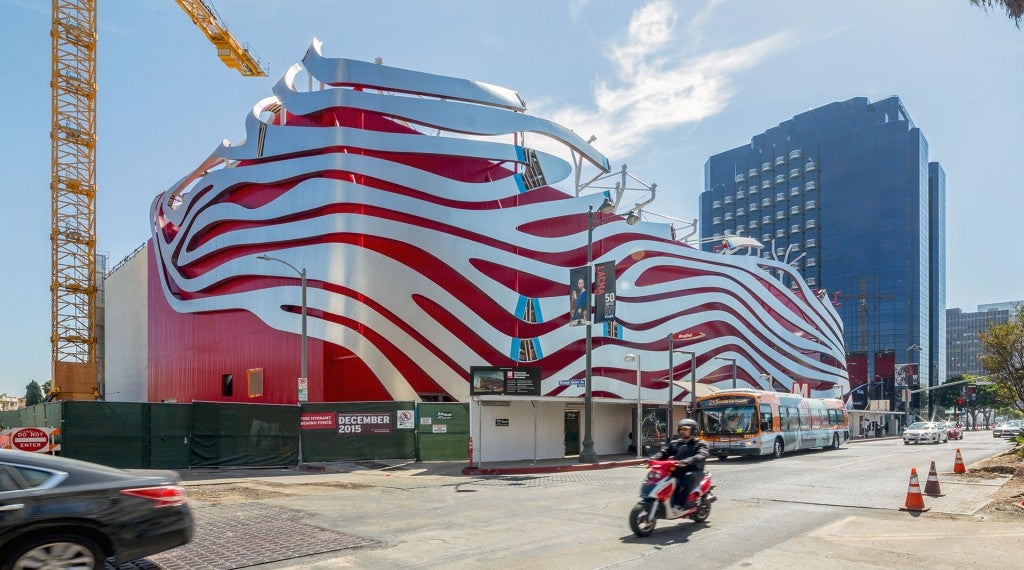 Draping the Petersen with ribbons, photo by Zahner

When it came to making this plate of robot spaghetti with red sauce, the real stars here might be the fabricators at Zahner. The Kansas City firm manufactured the curvaceous ribbons using a proprietary method called Zahner Engineered Profiled Panel Systems (ZEPPS) which accurately rendered the computer-generated shapes in hunks of stainless steel that looked like they'd be a bitch to clean. (Pigeon turds were the greatest concern for a group of journalists sitting near me.) Engineers shipped the 308 sections to LA where they were welded to the existing building using a series of of grey prongs.

Which is why the coolest part of the Petersen might be the roof, where you get incredible vistas of the Hollywood Hills framed through this structural nervous system and tangle of oxygenated arteries, as if you're standing atop a throbbing aorta, Fantastic Voyage-style.

It's like being trapped inside a pulsing heart bursting with car love.

The cherry red web — it's actually a Ferrari-esque tone; there's just a whisper of orange — also happens to match LACMA's newest wing across the street almost to the hue. But this inferred affiliation by architecture also acts like a wayfinding mechanism — Follow the red! — and the Petersen makes grand gestures to the pedestrians who are making their way over from LACMA.

For the first time in decades the Petersen's Wilshire Boulevard entrance has been reopened, meaning visitors no longer have to walk all the way around the building and begin their museum experience in a dark parking garage. Instead you get the fun experience of stepping behind the rippled skin for a behind-the-scenes peek as you use the footpath, the same trick I appreciated seeing at the Broad. 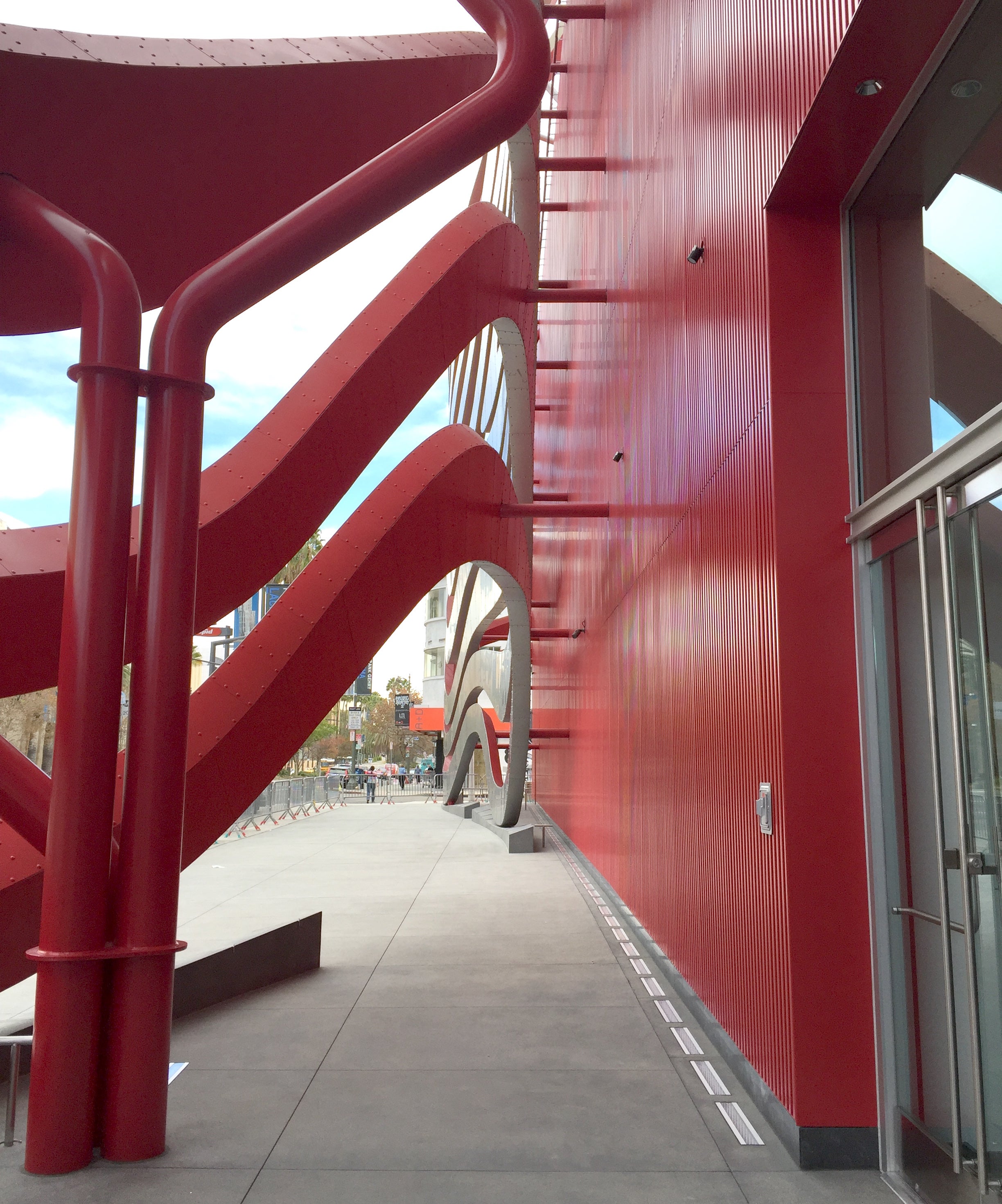 Of course, the New York architects refused to acknowledge that anyone might be doing this, clinging firmly to their stereotypical claims that the building is best appreciated in motion. "No one walks between these buildings," said Kohn, rather authoritatively, like three times during the press conference, as dozens of people waited to use the crosswalk below.

As for what's inside the museum itself, there are apparently hundreds of cars. I used to go to the Petersen for the one section focused on how Los Angeles grew thanks to its extensive public transit system, a story which has been condensed into a single interpretive kiosk by Dutch Monaco. All the kitschy exhibits are gone, in fact, replaced with extremely slick interpretive text and graphics by a firm named Scenic Route. It's all very well done and quite restrained compared to the exterior. But it also felt like I was getting the hard sell. It was like being on the showroom floor of my local Mini dealership (not inside a T-1000's loofah).

Like a shiny 2016 model that will look outdated in a year, the Petersen's flashy head-turner of a facade could not be better suited to this moment in history, as we watch the last sputtering gasps of an auto-obsessed culture. Rather ironically, signs all around the building advertise the fact that LA's Metro Purple Line is burrowing beneath it, with a station opening across the street in a few years that will move the city's reliance on cars even faster towards irrelevance. Eventually we will all need to go to museums to see personal, human-driven vehicles, and where better to see them than this ostentatious temple to an idea that society no longer worships.

As I walked north on Fairfax toward the bus stop I took one last look back towards the building. Maybe it was the way LA's afternoon sun reflected on the silvery swirls, but I realised the building reminded me of something else: the opalescent sheen of oil. How fitting then, to glorify the last hurrah of gasoline, just one block away from the ancient fossil fuels seeping from the La Brea Tar Pits — where they belong.