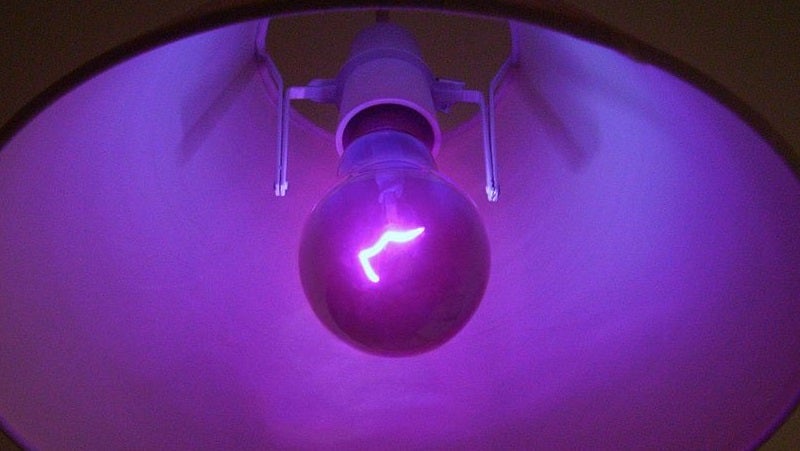 Today ultraviolet lamps are used during lacklustre raves. But they have an impressive history: They were first regularly used during World War I to secretly monitor spies.

Up until World War I, the fact that some lamps emitted ultraviolet rays was a major problem. UV rays were wasted energy. The lamp was emitting light in a spectrum that humans couldn't see. The most successful of such lamps were mercury vapour lamps. Mercury under high pressure was bottled up in a quartz tube. It emitted an impressive amount of light, but only because the side of the tube was coated with phosphors. The phosphors would be excited by UV rays, but as they shed their energy they would emit visible-spectrum light.

Early mercury vapour lamps did the same thing, until someone noticed that there might be a use for a lamp without phosphors. Spy catchers, who monitored papers passed between suspected spies, had multiple developers that they could use to make invisible ink visible, but these inevitably left a trace, and often destroyed the ink. At the time, many common invisible inks were biological. Spies would use milk, lemon juice, saliva, urine, or even semen. They were popular because they were available to all, and if a spy were stopped and interrogated, no one could use "possession of saliva" as evidence that they were a spy.

Thanks to many TV exposés on the shoddy cleaning standards of most hotel rooms, we know what body fluids look like under UV light. So did World War I spy catchers — at least after a while. They started getting "quartz lights" with the phosphors left out. A UV light would light up a secret message. The message could be photographed, the letter could be re-folded and sent. And, ideally, the spies were none the wiser.