How The Star Wars Planets Stack Up Against Our Own

Galaxies far far away often seem much more exciting than this one: fascist Empires ruled by ancient sorcery cults, giant space slugs, endless disposable droids. But when you get down to it, many of the planets in the Star Wars universe aren't so different from our own. 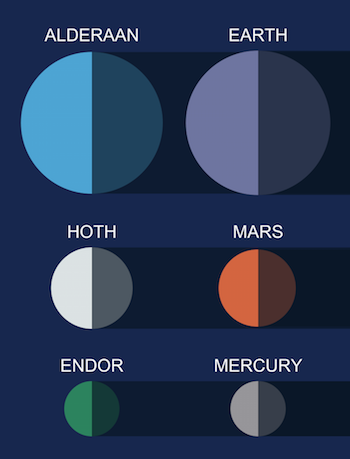 Chris Jones wanted to see how the planets and moons featured in the original Star Wars trilogy stack up against real planets in this galaxy. Turns out, many of them are quite comparable in size to places in our solar system. Endor is Mercury after a massive global cooling campaign, Hoth is Mars before all the water evaporated, and Bespin is a gas giant not so different in size from our Saturn. Yavin Prime seems to be in a class of its own, though — who knows — maybe it's similar to one of those fabled brown dwarfs lurking in the far reaches of our solar system.

Alderaan, a terrestrial planet with plant life, mountains and oceans, is ominously Earth-like, with a diameter of 12,500 km compared with our Blue Marble's 12,742 km. Fortunately, the citizens of Earth don't have to worry about a Death Star being built anytime soon — that particular weapon of mass destruction is just too damn expensive.

Images via Space-Facts / Chris Jones and reproduced with permission