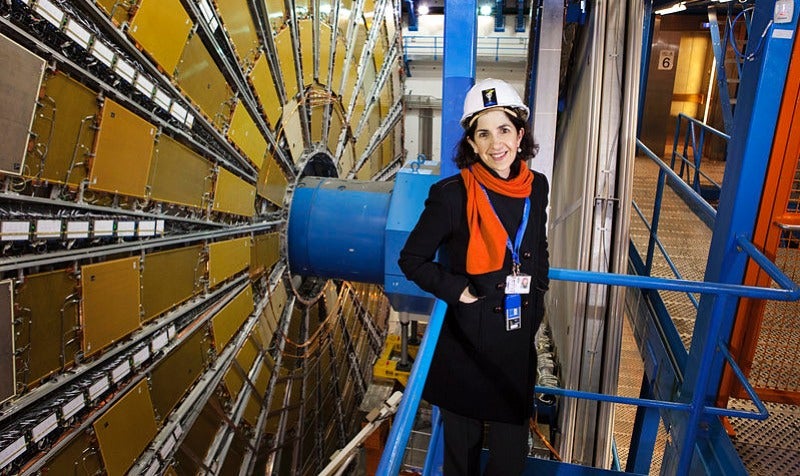 Particle physicist Fabiola Gianotti has become the first woman to head CERN, the organisation based in Switzerland that is home to the Large Hadron Collider. She succeeds outgoing director-general Rolf Heuer, who oversaw the laboratory's operations for the last seven years. Previously, Gianotti headed the ATLAS collaboration, one of two teams responsible for the discovery of the elusive Higgs boson on 4 July 2012. She quickly became a favourite figure in the media coverage surrounding that achievement — partly because of her gender (only 20 per cent of the ATLAS team were women), and for her elegantly understated style, but also for her good humour.

For instance: Her use of the much-derided Comic-Sans typeface on her Powerpoint slides during that historic announcement was the source of much Internet amusement. Gianotti took the ribbing in stride. She even made an April Fool's Day decree to make Comic Sans the official document typeface for all of CERN. She was a runner-up for Time magazine's Person of the Year in 2012.

Gianotti's father is a retired geologist, while her mother had a passion for music and art. Their daughter, born in 1962, effortlessly straddles both cultural realms, excelling not just in physics, but also music, cooking, and even dance (she trained as a ballerina as a child). "Musical harmony is based on physical principles while in cooking, ingredients must be weighed out with precision," she told the Guardian in 2014, when her selection as the next director-general of CERN was announced. "At the same time, you have to able to invent, because if one follows the same recipe all the time, you never create anything new."

Alex Cranz 28 Feb 2020 10:00 AM
Last decade we saw the smartphone move from overpriced gadget to something more necessary than a laptop or desktop. We saw the e-reader settle on a design so perfect it’s barely changed in seven years. We saw games systems that made us rethink how we game and laptops that made us rethink what a good laptop should look like. There were incredible wearables, and remarkable VR systems, and drones so well designed practically anyone can fly them. Below are the most innovative gadgets of the last decade—the ones that will continue to matter long after the devices themselves become obsolete.