Can Christmas Lights Really Play Havoc With Your Wi-Fi? 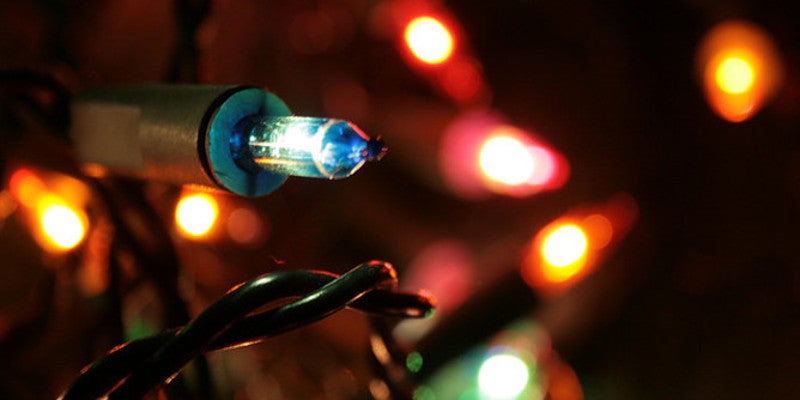 A telephone regulator has warned that festive decorations can spoil your festive internet fun. Here's the science.

Ofcom, the UK's independent telephony regulator, has just released a Wi-Fi checker app for your smart phone. At the same time, it warned in its press release that your Christmas tree fairy lights could affect the quality of your Wi-Fi connection.

Before the terrible jokes start and we all declare that this is a fit of "Bah Humbug!" from the telephone regulator, the warning is correct — your fairy lights could indeed be a Wi-Fi downer. But then so could many other devices. Ultimately, it is a matter of how much of a problem they actually cause.

The science behind the warning

The whole press release describes how microwave ovens, fluorescent lights and other devices could also play havoc with your wireless connection.

Your wireless router also uses considerably less power than a public FM transmitter. We expect the maximum reach of a domestic Wi-Fi signal to be 100m, while FM in the right conditions can easily be obtained at up to 10km and beyond. (There are also public forms of Wi-Fi called WiMAX, which can work in larger areas, but it is important to note that this is unrelated to the Ofcom press release.)

Because your wireless network is much less powerful than a big FM transmitter and its waves are weaker, where you place the router and what you have in your house will have an impact. Home electrics, microwaves, steel girders, concrete cladding and foil insulation all can have an effect. Older properties with their thicker walls make a difference, too, as the lower-powered, high frequency Wi-Fi radio waves struggle to penetrate them.

But while many different factors can dull your Wi-Fi signal, I can't recall anyone yet getting miffed about their festive laptop watching of Dr Who being affected as soon as the Christmas lights go on.

What should you do?

But it is possible. Most fairy lights have unshielded wires, which means there's no radio frequency insulation to protect radio-based devices from the electromagnetic effects of the power cables trailing around your tree.

Nevertheless, it would take a considerable volume of lights to create enough interference to seriously degrade your Wi-Fi network. In fact, you would have to be lighting up your tree like a small sun — which perhaps some of you are planning.

Do consider downloading the Wi-Fi checker app offered by Ofcom, however — it may help you discover that it's the service provided by your phone company, rather than the fairy lights, that's to blame for all that endless buffering.

You should also think about where you place your wireless router in your home. Hiding it under a tin can inside a cupboard insulated with tin foil will ruin your Facebook fun. As will decorating your wireless device with holly and fairy lights.

There are domestic devices that will degrade the wireless signal — although it's not often you'll be running your microwave 24 hours a day — but don't rush to throw away your fairy lights just yet. Christmas is coming, after all.

Andrew Smith is a Senior Lecturer in Networking at The Open University.