We Can’t Stop Watching This Video Of Flowing Sand Art 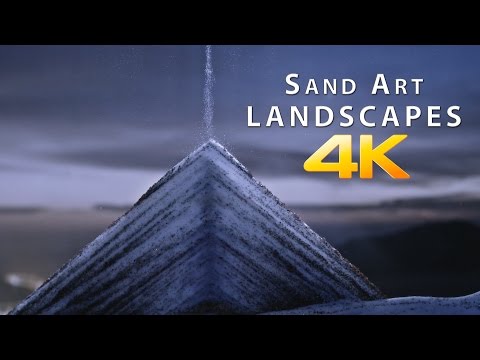 Take two panes of glass and glue them together with liquid and sand in between, and you’ve got the makings of some eye-popping dynamic sandscape art.

For the above video, Joey Shanks (Shanks FX, in collaboration with PBS Digital Studios) worked with three different frames to get the effects he wanted, but the same principles apply to all three. Gluing the two panes together creates an air-tight seal, and if you then rotate the frame, the pockets of air bubbles inside will rise, creating a barrier between the liquid and the sand. Eventually, though, the sand finds its way through the barrier, seeping through to form lovely patterns as it combines with the liquid.

Sand is a so-called granular material that acts both like a liquid and a solid: dry sand collected in a bucket pours like a fluid, yet you can put a rock on top of a sand pile, and it stays put, because now sand is behaving like a solid. It’s as if the grains act as individuals in the fluid form, but are capable of suddenly banding together when solidarity is needed.

As for the physics at play in a sandpile, you’ve got gravity pulling down on each single particle, and friction between all the grains as they rub up against each other. All that bumping and grinding results in mechanical energy being lost as heat. So you get interesting fluid phenomena like percolation (small grains sink to the bottom of the pile), convection (large grains push up to the top), and condensation (a sifting mechanism).

That’s what you see happening in the video above. Per FYFD:

“The buoyancy of the trapped air bubbles lets the sand sift slowly down instead of falling immediately. And the sand descends in a variety of ways — sometimes laminar columns and other times wilder turbulent plumes.”

Changing the amount of air inside the glass — Shanks did this with a small syringe — allows you to control the speed of the avalanche. The more air there is, the slower the sand cascades, and vice versa.