This Video Explains The Most Disturbing Fashion Trend In Human History 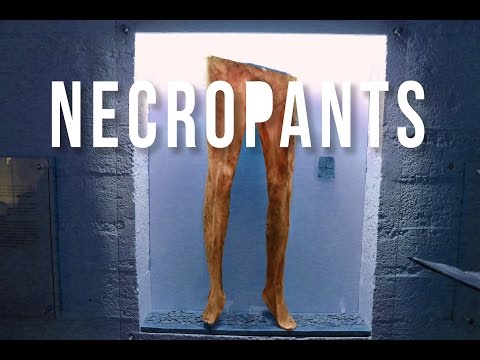 17th century Icelanders were a cold, hungry, light-deprived lot. And it’s under these miserable conditions that imaginations dreamt up the most disturbing wearable ever: Leggings, made of the skin of your dead friend.

They’re called necropants, and today, their macabre history is preserved at the Museum of Icelandic Sorcery and Witchcraft. Here’s how the skinny pants worked. First, you had to get permission from your friend to wear his, um, legs, before he died. Then, following his completely natural death that you didn’t have anything to do with, you’d go out to his grave, dig up his body, flay the skin off his corpse from the waist down, and put it on.

According to the witchcraft museum, here’s what happens next:

As soon as you step into the pants they will stick to your own skin. A coin must be stolen from a poor widow and placed in the scrotum along with the magical sign, nábrókarstafur, written on a piece of paper. Consequently the coin will draw money into the scrotum so it will never be empty, as long as the original coin is not removed. To ensure salvation the owner has to convince someone else to overtake the pants and step into each leg as soon as he gets out of it. The necropants will thus keep the money-gathering nature for generations.

There you have it, folks: Pre-industrial Iceland was such a craphole human beings actually convinced themselves that skinning their dead loved ones would bring about better times. Watch the Atlas Obscura video above to learn more about necropants, check out the modern Blackmilk version on io9 if you’re feeling especially morbid, or attempt to purge this post from your memory with some adorable baby ducklings: