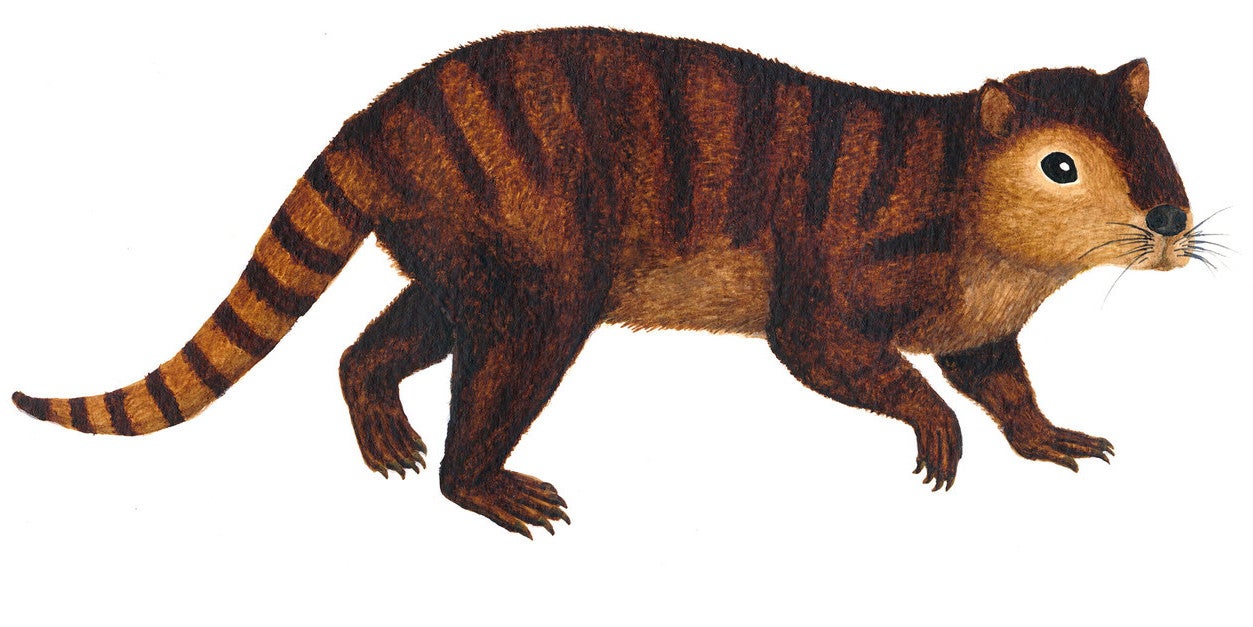 Sixty six million years ago the world changed in an instant. A huge asteroid, some ten kilometers in diameter, smashed into what is now Mexico. It arrived with the force of several million nuclear bombs, and unleashed a deadly cocktail of wildfires, tsunamis, earthquakes, and volcanoes.


It wasn’t a good time to be alive. Scientists estimate that about 75% of all species became extinct, most famously among them the dinosaurs. But some of our furry ancestors managed to make it through the apocalypse. With T. rex and Triceratops now out of the picture, gutsy little mammals had a new world to colonize.

A new fossil from New Mexico is helping us better understand how mammals took advantage of the dinosaur extinction to become the incredibly successful creatures that we know today. It was discovered and studied by a team of researchers that I am part of, led by Thomas Williamson of the New Mexico Museum of Natural History and Science.

Our new mammal, called Kimbetopsalis simmonsae, would have looked like a prehistoric version of a beaver. It was a couple of feet long, weighed 10-40 kilograms, and had buck-toothed incisors at the front of its snout that it used to cut up leaves and branches.

Despite appearances, Kimbetopsalis was no beaver (which is a type of rodent). It was a member of a completely extinct group of mammals called multituberculates, which originated alongside the dinosaurs, survived the extinction, diversified afterwards, and ultimately went extinct 35 million years ago when they were superseded by the smarter, faster-growing modern rodents.

Kimbetopsalis lived in a lush environment of forests, rivers, and lakes only a few hundred thousand years after the asteroid impact. That’s a blink of the eye in geological terms, a minuscule speck of time in the 4.5-billion-year history of planet. Kimbetopsalis shows us how quickly the Earth changed from a dinosaur-dominated world to one overrun with mammals.

Although it lived so soon after the dinosaurs bit the dust, Kimbetopsalis was a totally new breed of mammal. It was larger than the primitive mammals that had lived alongside the dinosaurs over the past 150 million years, which were puny creatures that rarely (if ever) got above 10-15 kilograms in mass. Kimbetopsalis was also a dedicated plant eater, a diet that few (if any) mammals had enjoyed previously.

In the footsteps of Kimbetopsalis


And Kimbetopsalis wasn’t some lonesome pioneer navigating the wreckage of a destroyed landscape, but one of many mammals flourishing in ancient New Mexico at this time. Mammals were clearly prospering in this brave new world, getting their first taste of evolutionary success and laying the foundation for a whole new era in which they, not dinosaurs, reigned supreme. This burst of evolution led to primates, which eventually led to us.

Kimbetopsalis is testament to how the history of life hinges on moments that can reset the course of evolution. T. rex and kin had ruled the Earth for over 100 million years. Then suddenly the world was thrown into chaos by rapid environmental change. Dinosaurs couldn’t cope and all of a sudden they were gone. Their size and strength couldn’t save them. Mammals fared better, and now one species of brainy ape occupies that dominant place in nature that was once held by the dinosaurs.

Stephen Brusatte is Chancellor’s Fellow in Vertebrate Palaeontology at the University of Edinburgh.