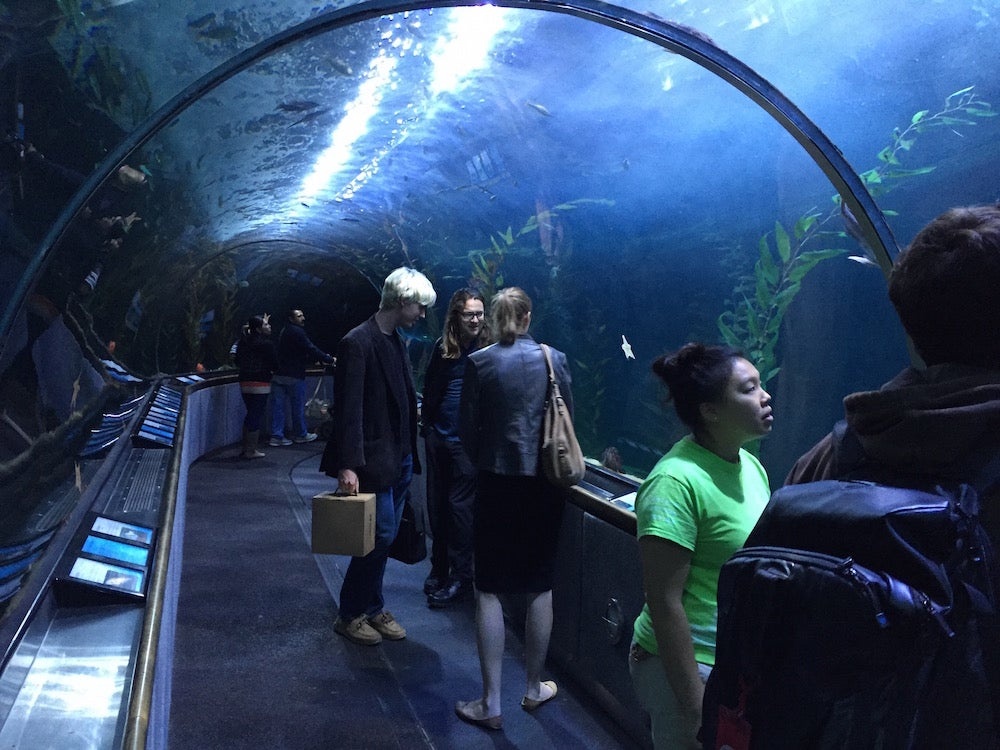 The future of drones isn’t in the skies. It’s in the ocean. That’s what the OpenROV team proved in 2012 with their wildly successful remote-controlled ocean-going drone (complete with underwater camera). And now they’re back with the Trident, a sleeker, faster model — which I took for a test swim last week at San Francisco’s Aquarium of the Bay.


The Aquarium of the Bay’s tunnel through the water tank where we flew the Trident. In the foreground, you can see Aquarium animal behaviorist Noel Fong telling Stackpole about safety concerns with the fish.

OpenROV co-founder Eric Stackpole, formerly an engineer with NASA, wanted to test out the prototype Trident in a small, controlled area with high visibility. So he approached San Francisco’s Aquarium of the Bay, a unique aquarium in the San Francisco wharf area that recreates the Bay’s ecosystems in their massive tanks. Visitors walk through tunnels to see sharks, rays, sardines, bass, and many other kinds of Bay wildlife. It would be the perfect place to test out the tiny water drone, whose progeny will soon be part of many scientists’ and teachers’ research kits for exploring ocean wildlife.

I’ve been following the OpenROV project for a while, so I was excited when Stackpole invited me to come along on the test flight. That’s the first thing you should know about ROVs, by the way — even though they are swimming, their pilots always describe them as “flying.” Given the Trident’s incredible speed, the word seems apt.

Our guide at the Aquarium was animal behaviorist Noel Fong, an expert on river otters and many other critters who live in the tanks we’d be exploring. She was there to make sure the Trident didn’t agitate the fish, who would start skittering around at the surface of the water if they became upset. 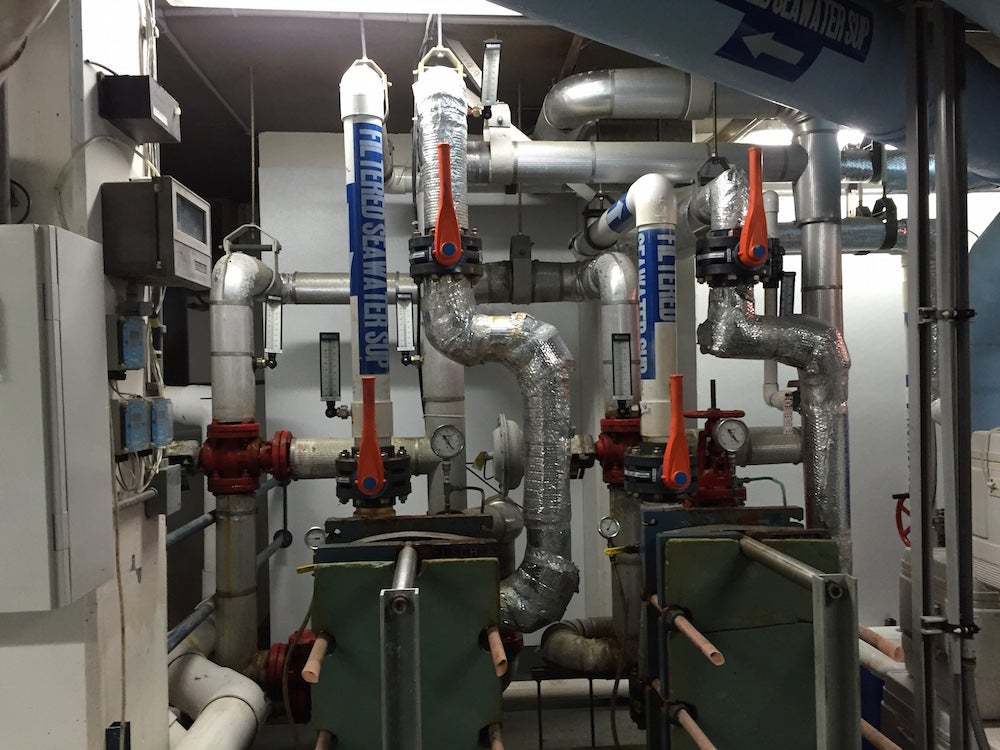 The Aquarium pulls water in from the San Francisco Bay, filters it through an elaborate system to remove contaminants, and then fills its tanks with the clean water.

We passed through the exhibits, and then into a back stairway that smelled like salt water and fish. We emerged above the tunnel we’d walked through along with other visitors, seeing the tanks from above. Fong explained that the lights above the huge tanks are set to turn on in the morning, and then to go off one-by-one in the evening, to simulate nightfall. 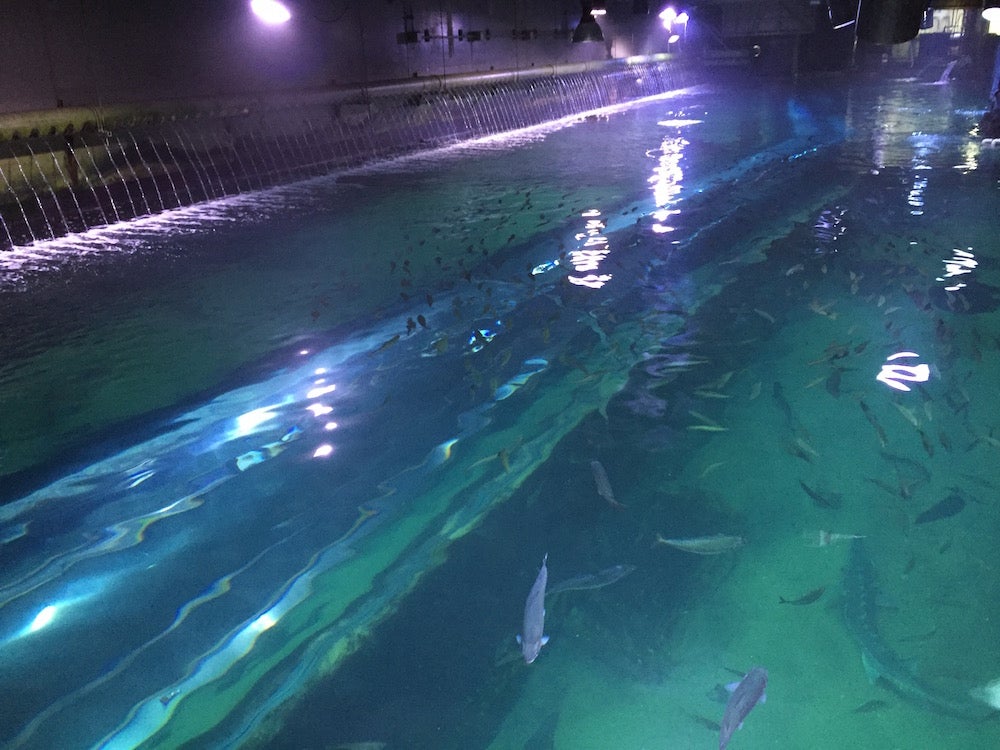 There’s a constant stream of clean water pouring from hundreds of spigots into each tank. Below us, sharks and rays nosed around the kelp and sardines swarmed. 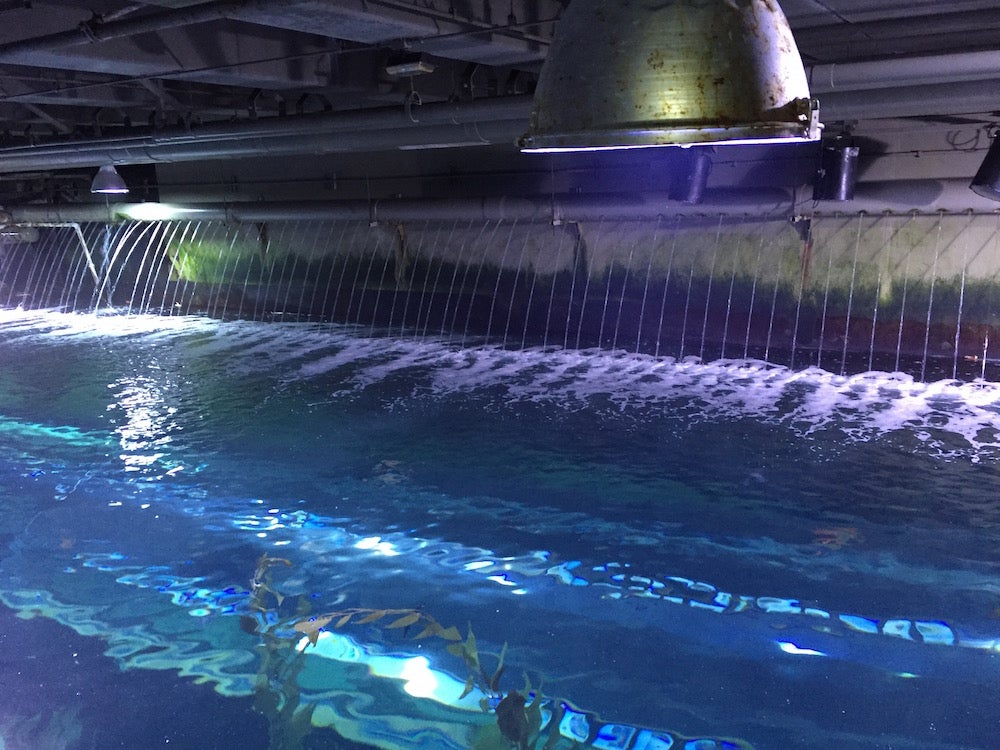 Stackpole set up the Trident on a staging area normally used by SCUBA divers who work with the animals. The Trident looks sleek and streamlined compared to its more boxy predecessors, and is steered with a Playstation controller. 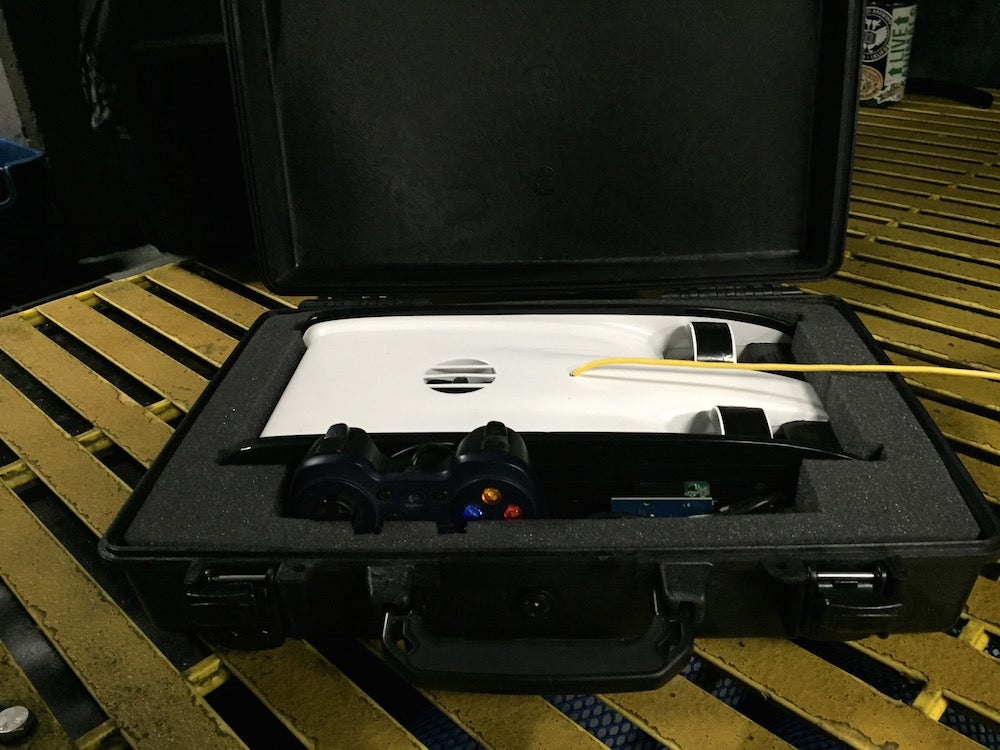 The main way the OpenROV team has improved on the old designs is by offering finer control over the pitch of the device. “Pitch” is that front-back wobble that helps the ROV dive or remain stable at a set depth. The new design includes a vertical thruster slightly forward from the middle (it’s that round opening you see in the Trident, above). Combined with two horizontal thrusters in the back, this design gives you a lot of control over pitch, basically because there’s less drag on the rear of the device. 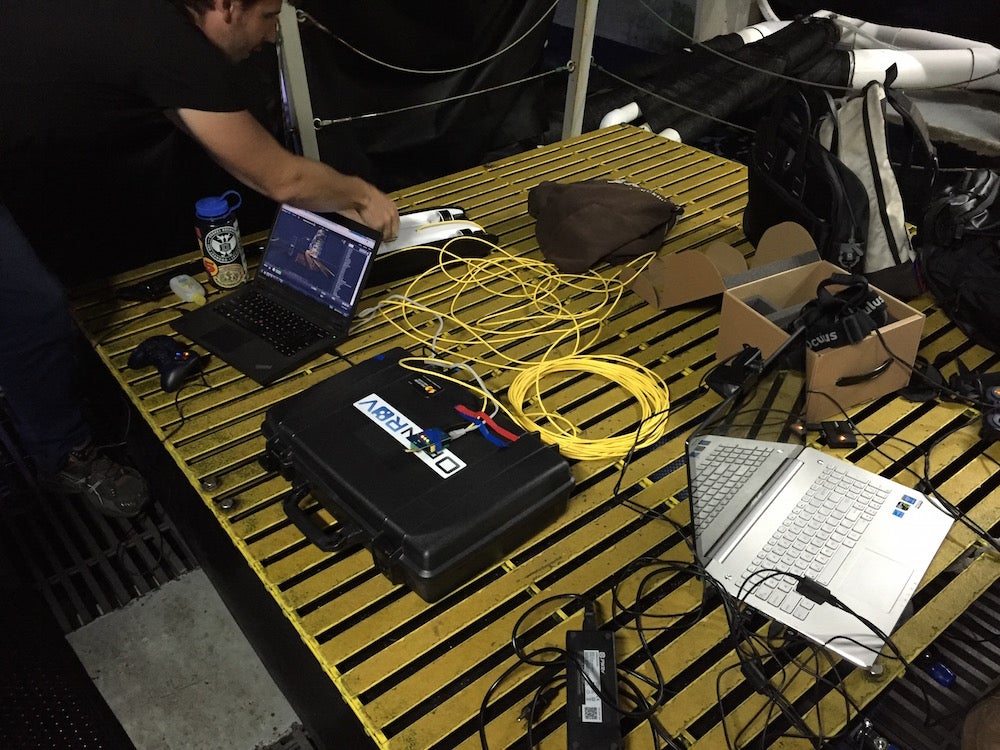 OpenROV has also improved the frame rate on the camera, which is often what people are using to steer the ROV once it’s taken the plunge underwater. The device can get down to a depth of 100 metres, so you’re not going to see it at all from the surface.

When we were ready to do the test flight, Stackpole picked the Trident up by its tether (which feeds data back to the app) and dropped it into the tank. 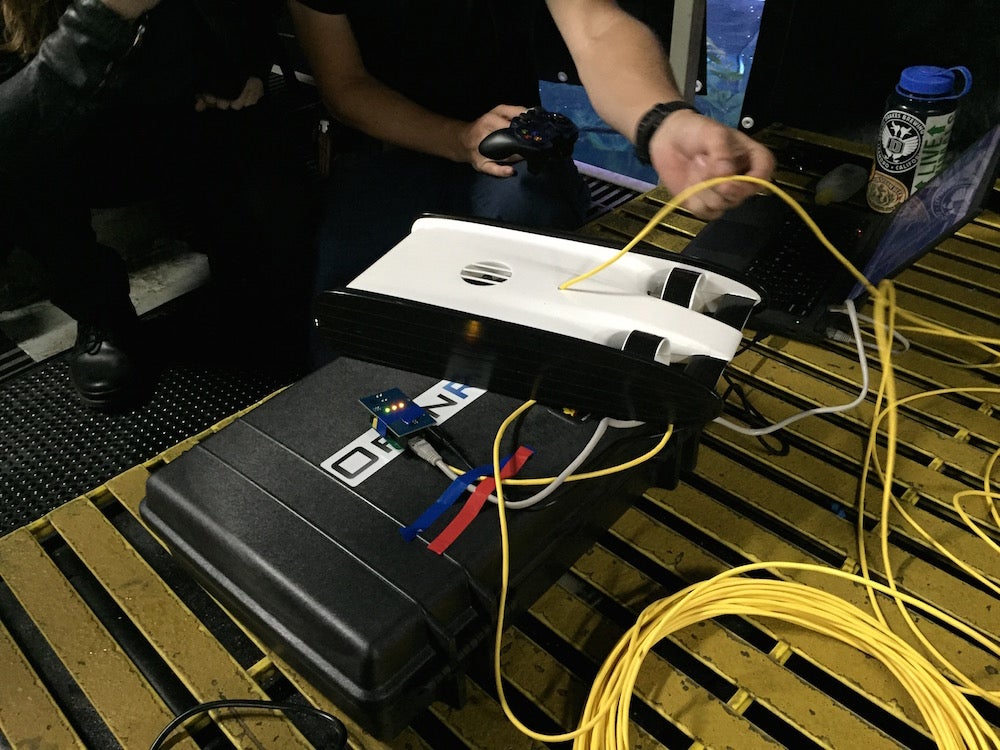 Fong watched intently, making sure none of the fish seemed nervous. She was especially concerned about a “very shy” giant bass that was roughly the size and shape of a torpedo. It prefers a quiet life at the bottom of the tank, and a little ROV zooming into its face was definitely not going to sit well.

Stackpole kept the Trident moving slowly, and the fish mostly seemed to be ignoring it. All good so far. 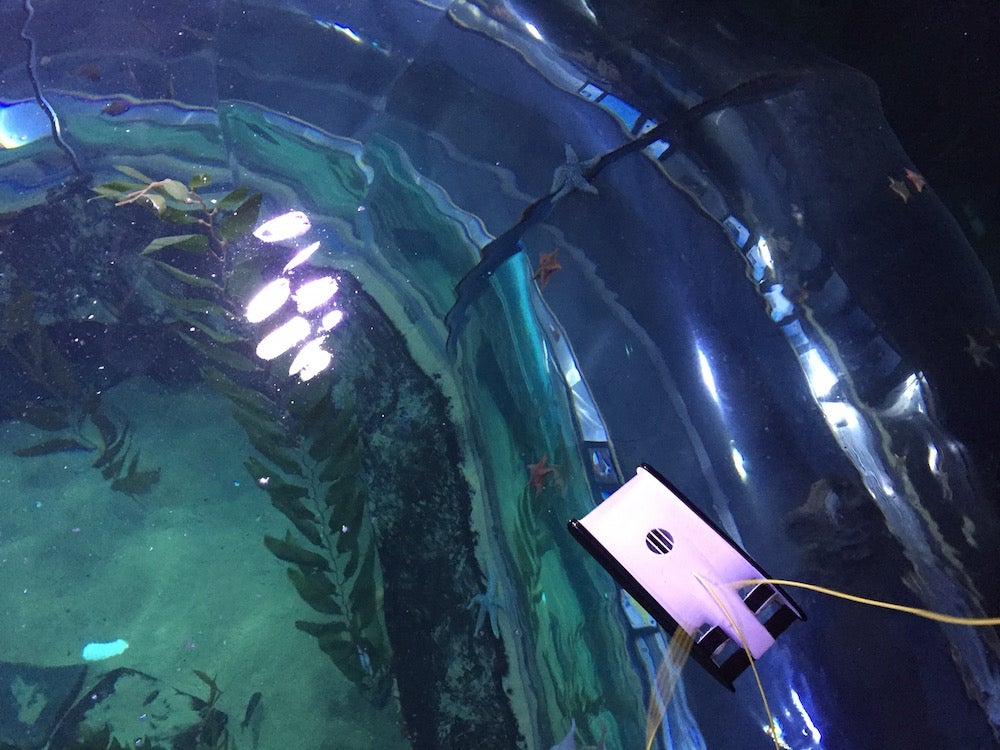 That said, the ROV moves so quickly that it took a lot of careful recalibrating to get it moving at a fish-friendly pace. Fong tested it out after Stackpole did a few dives, driving in a couple of circles before handing the controls to me. The game controller makes it easy to fly the Trident, though you have to remember that directions are relative to the ROV itself, not relative to you. So if the ROV is facing left, and you want it to keep going left, you have to aim it straight ahead, not left. Yeah, it took me a few seconds to get that right.

We managed to fly through the kelp and past a school of sardines without incident. Then we took some deep dives and hovered in the middle of the water column, just looking around. And somehow, I didn’t run into the wall of the tank, which was a great relief. 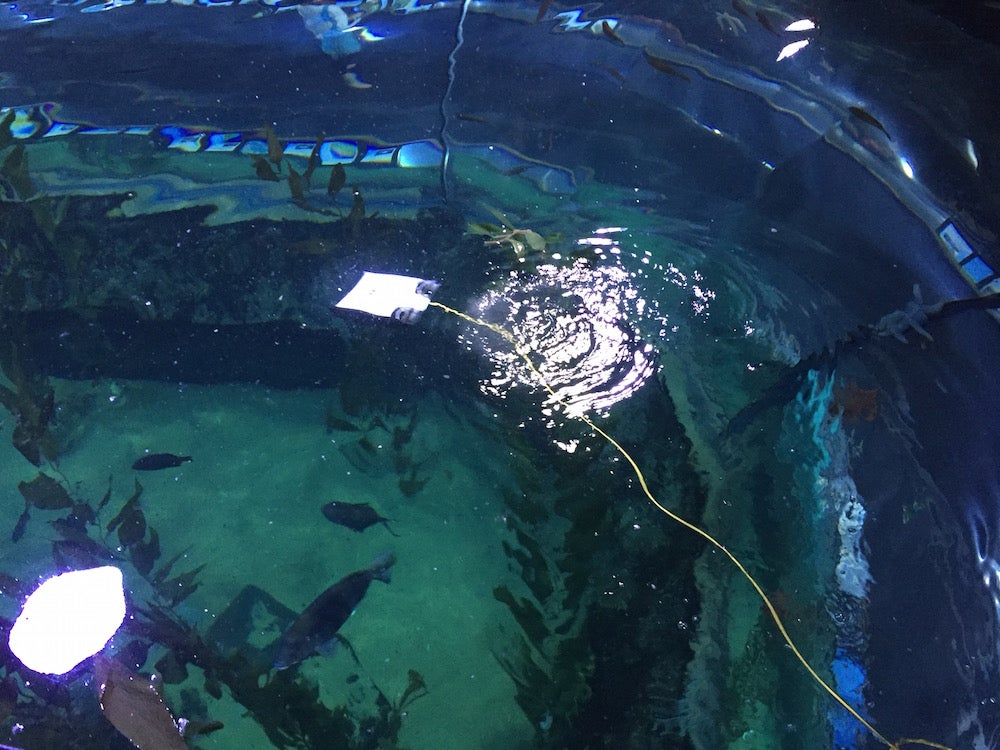 Stackpole says he can imagine people doing all kinds of stuff with the Trident, from exploring ship wrecks, to mapping the ocean floor. With its nice pitch control, the Trident is ideal for skimming straight over the ocean floor and doing a survey. It’s the perfect, low-cost device for chronically-underfunded marine biologists and geologists studying the vast, unknown world that covers most of our planet.

Plus, Stackpole enthused, “You can escape the real world, by going into the real world!” The Trident is like virtual reality turned on its head, offering students, scientists, and explorers a chance to see what’s all around them, invisible beneath a hundred metres of water. Stackpole’s colleague Charles Cross, a software engineer, is working on a VR interface with an Oculus for the Trident. We tested it out on this flight.

The VR interface puts you in the cockpit of the Trident, and while it’s very beta right now, it’s obvious how fun it will be when the whole thing is perfected. You can watch the water flow around you, and curious fish faces pop into your view in glorious 3-D. It feels like an amusement park ride — except it’s real. You’re really driving around underwater, exploring.

You can donate to the Kickstarter campaign and get your very own Trident! So far, the campaign has raised roughly $US620,000, out of the $US50,000 they hoped to get. So you’ll be in good company. Stackpole says the Tridents will begin shipping in time for the holidays in 2016, after the company spends most of the year perfecting it. It will retail for $1,653, but if you support the Kickstarter now, you may be able shave a few hundred off that price — or you can give more, to support the development team.