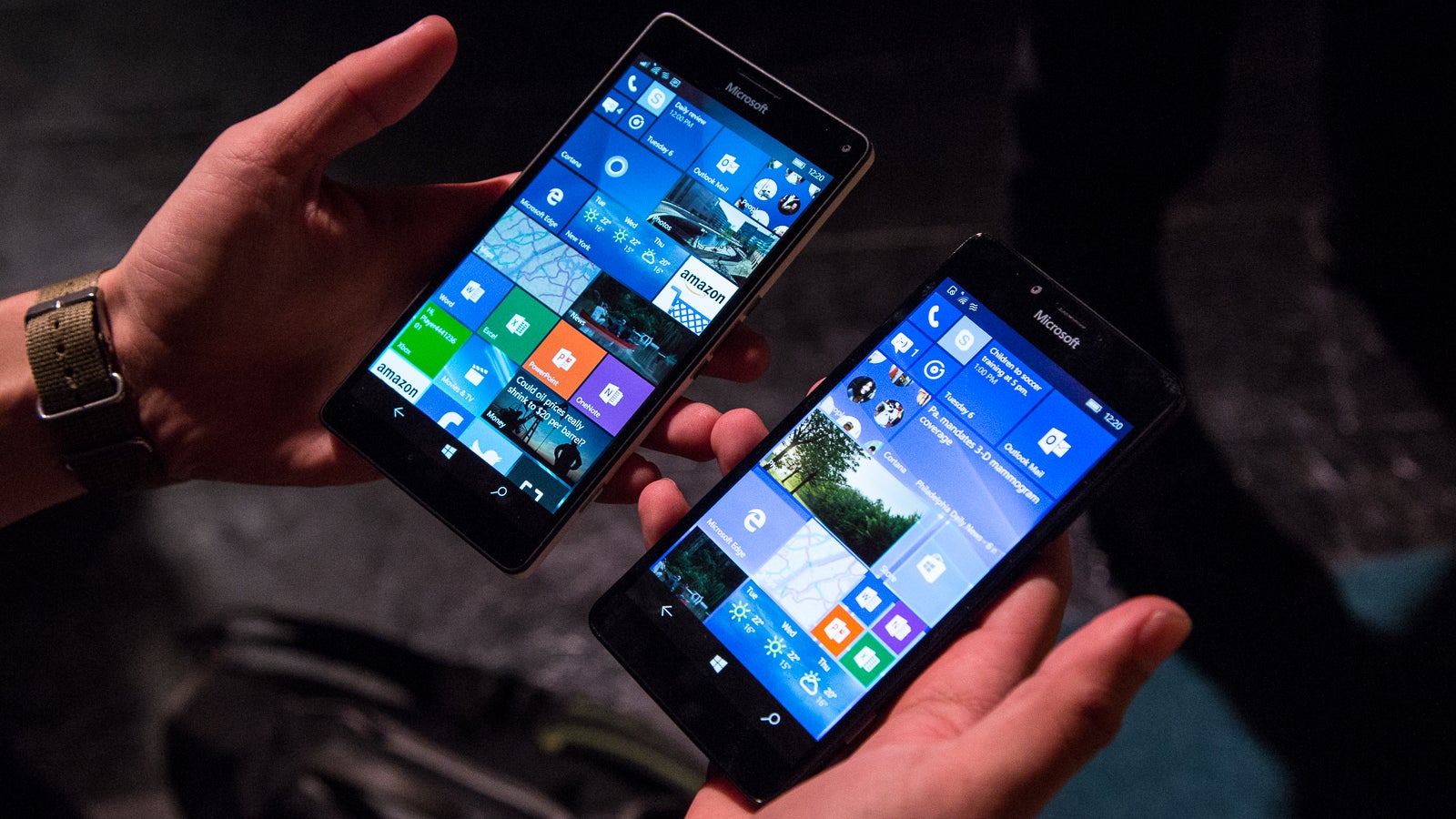 Windows Phone has always been a conundrum. It’s a platform filled with good ideas (I always liked Live Tiles I admit), but something kept it from being my smartphone go-to. With the Lumia 950 and 950XL, I’m experiencing a serious case of déjà vu.


Panos Panay and the Microsoft Devices team just launched two new Windows 10 phones. These aren’t meant for international users or emerging markets. These are the heavy hitters — the Lumia 950 and 950XL. Much like the Surface is for Windows tablets, these Lumias are here to showcase the very best that Windows mobile can offer.

Right when you pick up these new Lumia phones, you’ll notice they’re lightweight. But it feels lightweight due to material sacrifice. When you hold the Galaxy S6 or an iPhone, the weight gives it some heft, sure, but that’s weirdly important in a device despite our obsession with thinner and lighter. It just makes it feel substantial.

The way I would describe the weight of these new Lumia’s is almost “cheap.”

But first impressions can be wrong. The Lumia 950 and 950XL is anything but cheap, packing the latest Snapdragon 808 and 810 processors, respectively. Because of that powerful chipset, they’re also the only phones in the entire Lumia line that can Voltron into a PC with Microsoft’s Continuum feature (more on that in a second).

Another plus? You can remove the back for expandable storage, and yes, you can even remove the battery. Popping off the back is incredibly simple: with a little divot in the bottom of the device, and it comes off easy. Samsung, the old guard of removable backs, couldn’t have done it any better. 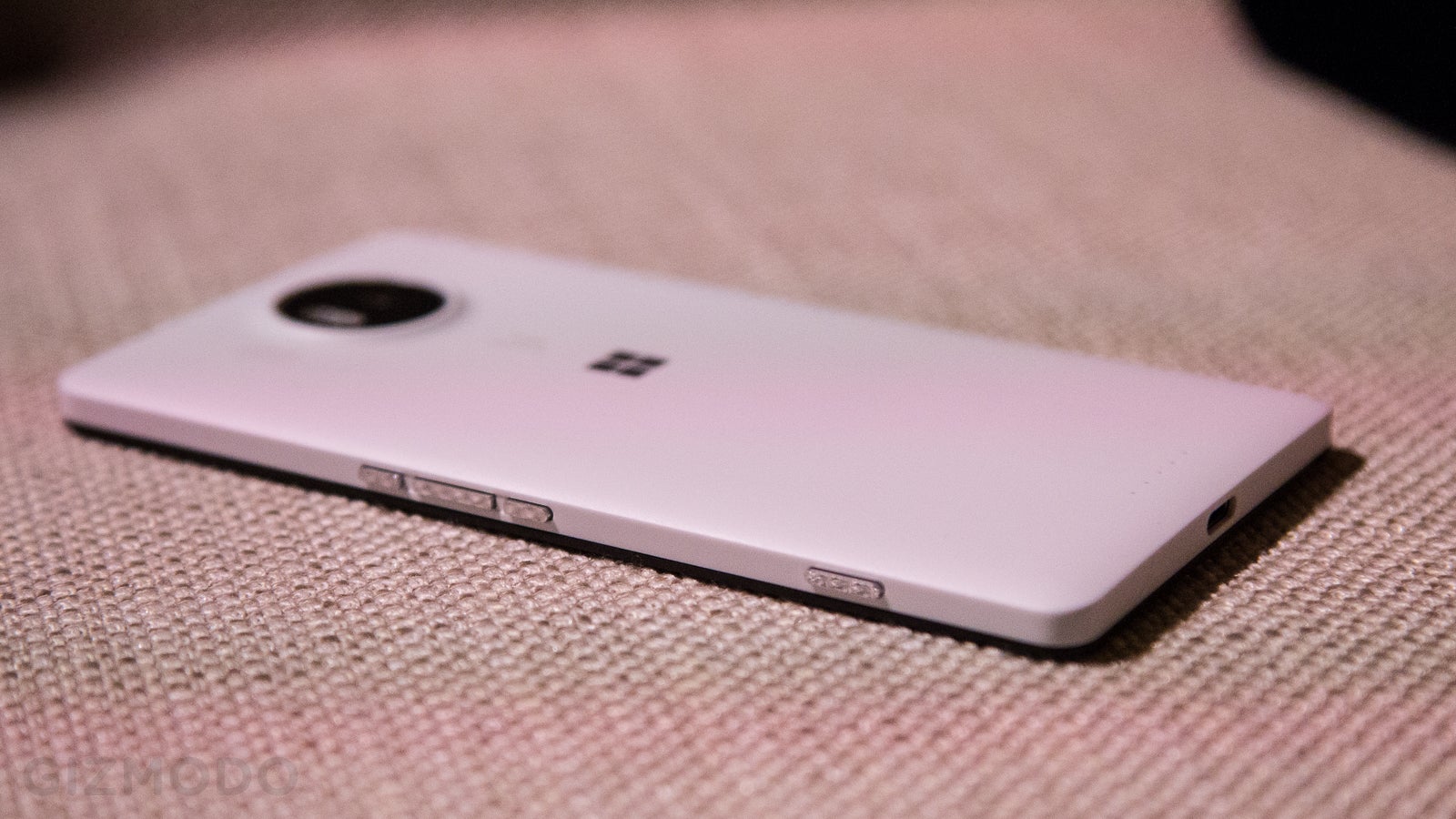 It also comes with the incredible camera that Lumias are known for. Microsoft reps made sure to detail that they haven’t mucked with Nokia’s refined camera technology too much, just adding in a new generation OIS module and few other image algorithm updates. The screen is a WQHD display with 564ppi (and 518 ppi on the 950XL). That’s also right up there with the best of them.

Everything about the 950 and 950XL is a spec sheet dream. The only thing you could knock the Lumia for is it has no water-proof or dust-proof protection, but there’s still wireless Qi charging and newly added USB Type-C for even more incredibly fast charging. Seriously, the new Lumias have it all.

But then you use it, and you begin to run into a few head scratchers. Let’s start at the lock screen. Microsoft uses its own version of biometric authentication with Windows Hello. Although watching the phone use a front-facing sensor to recognise your face and log you in is really cool, in practice it feels a little clunky.

During a demo, it actually didn’t work prompting me to log in with an old pin like normal. The rep actually removed the battery, put it back in, and then it worked. But even when it was working like it should, it was nowhere near as fast as Touch ID on the iPhone or other Android fingerprint sensors out there. It was probably a full second slower actually.

However, Windows Hello on a laptop feels like an amazing innovation often because laptop passwords are much more robust than your usual four-pin password number. But smartphones are accessed so frequently everyday, Windows Hello just doesn’t feel like it can quite keep up yet. 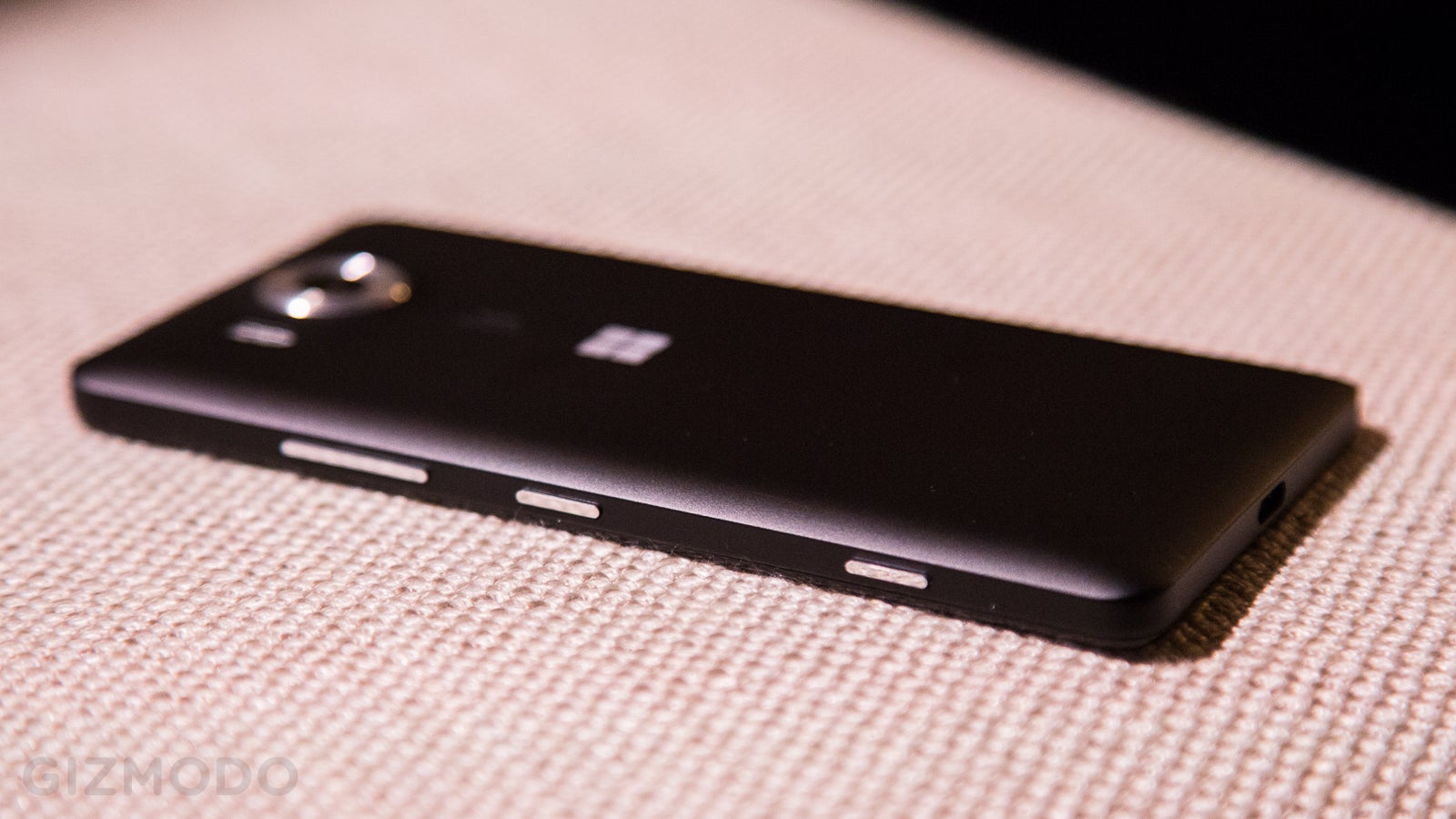 Then you get to the full Windows 10 on phones experience. Don’t get me wrong — everywhere you look there are improvements over Windows Phone 8.1. A cleaned up multitasking interface, a more useful Cortana, and small little polishes — like a moveable keyboard and even moving the entire OS down so it’s easy to reach with one hand — makes Windows 10 for phones feel like a step in the more useable direction. But compared to iOS 9 and Android Marshmallow, Windows 10 isn’t nearly as fluid with animations. I wouldn’t say that the phone was any slower. After all, all these high-spec’d phones usually use the same processor anyway, it’s the choppy animations just come off feeling a little…half-baked.

In just my short time with the Lumia 950XL (the best one based on pure specs), I saw weird graphical mishaps and needed to try several different times just to access the drop-down action center. It’s like when Android spends a little extra time developing those fluid transitions between apps, you may not consciously notice, but your brain does. When that extra polish is missing, it’s almost jarring.

Overall, it felt like “yeah, this is useable, but not easily useable.” I won’t give Microsoft too much of a hard time, though. They’re still working out a few kinks with Windows for phones before launch. But from just an average use standpoint, I couldn’t help feeling underwhelmed.

But then there’s Continuum, and things start to get interesting again. When I got some hands-on time with Continuum, which is basically like running a PC-like experience off of a Lumia smartphone — with the help of the Microsoft Display Dock — it was hard not to be impressed. You can even stream 1080p video no problem. I could get used to that. 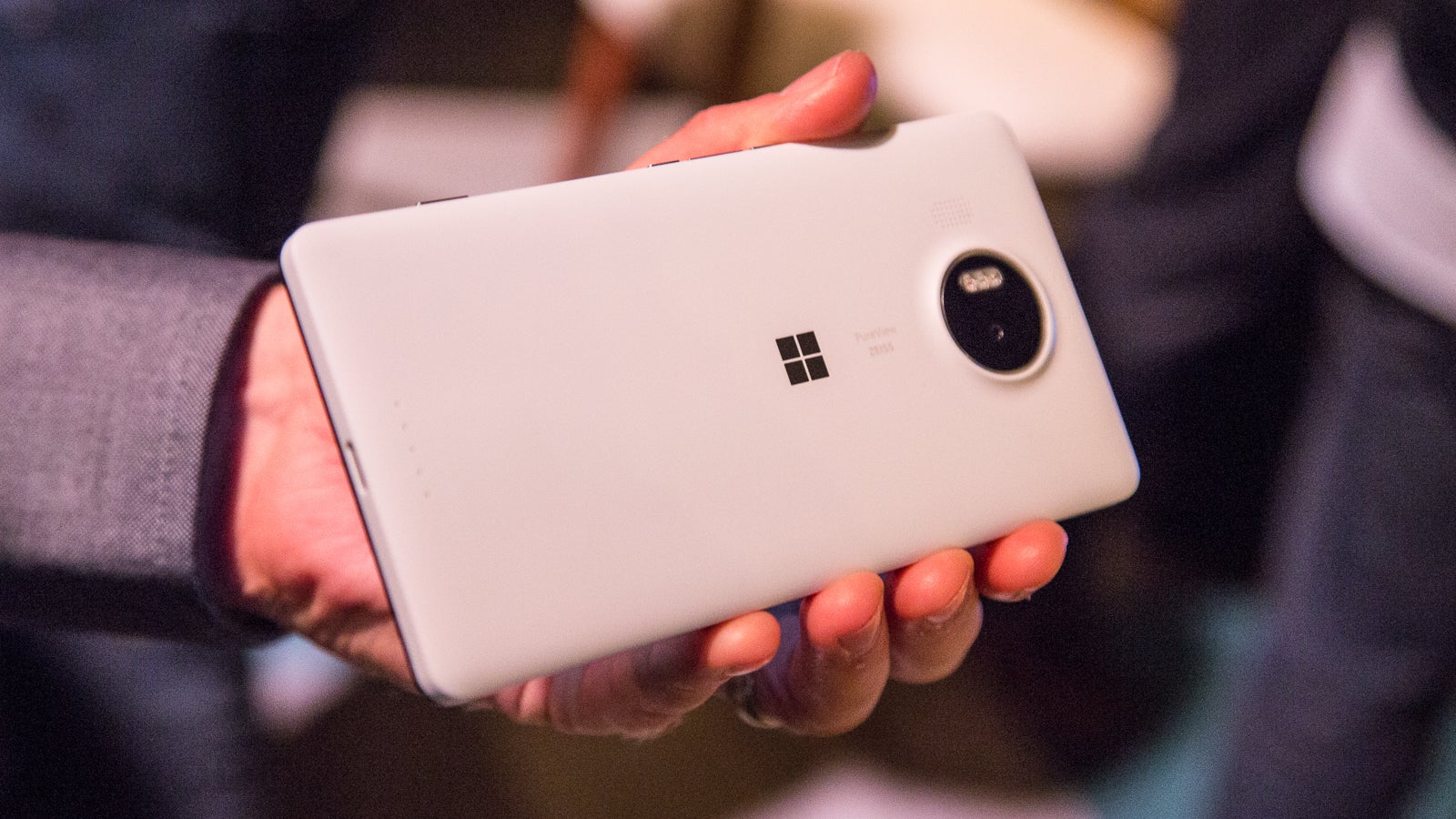 Although currently only compatible with universal Windows apps, I was able to plug in a phone and work on a desktop display like it was a normal Windows 10 workstation with an oh so slightly tweaked dock and another bar at the top of the display showing battery life information, etc.

But then I started thinking about Continuum outside the context of a tech demo. Why would I have an Ultra HD Samsung display (not cheap!), which was used in the demo, and not just have a laptop to connect to it? Or better yet, a dedicated PC. I wasn’t quite seeing this future scenario where I personally would get any use out of this.

Is it for people who can only afford a smartphone? Well, no because it works on only expensive Lumias with high-spec’d chips. Is it a workflow kind of thing? Like you start something on your smartphone, and you can just plug it in and finish? Well, not really that, either. Satya Nadella’s whole mission is mobile-first, cloud-first, so ideally whatever you’re working on is synced across everything you own. I guess…if you’re…too lazy to pull out your laptop?! Sure. Maybe if you’re a business person you can just throw up a PowerPoint straight from your phone in like two seconds. That’s cool, I guess. 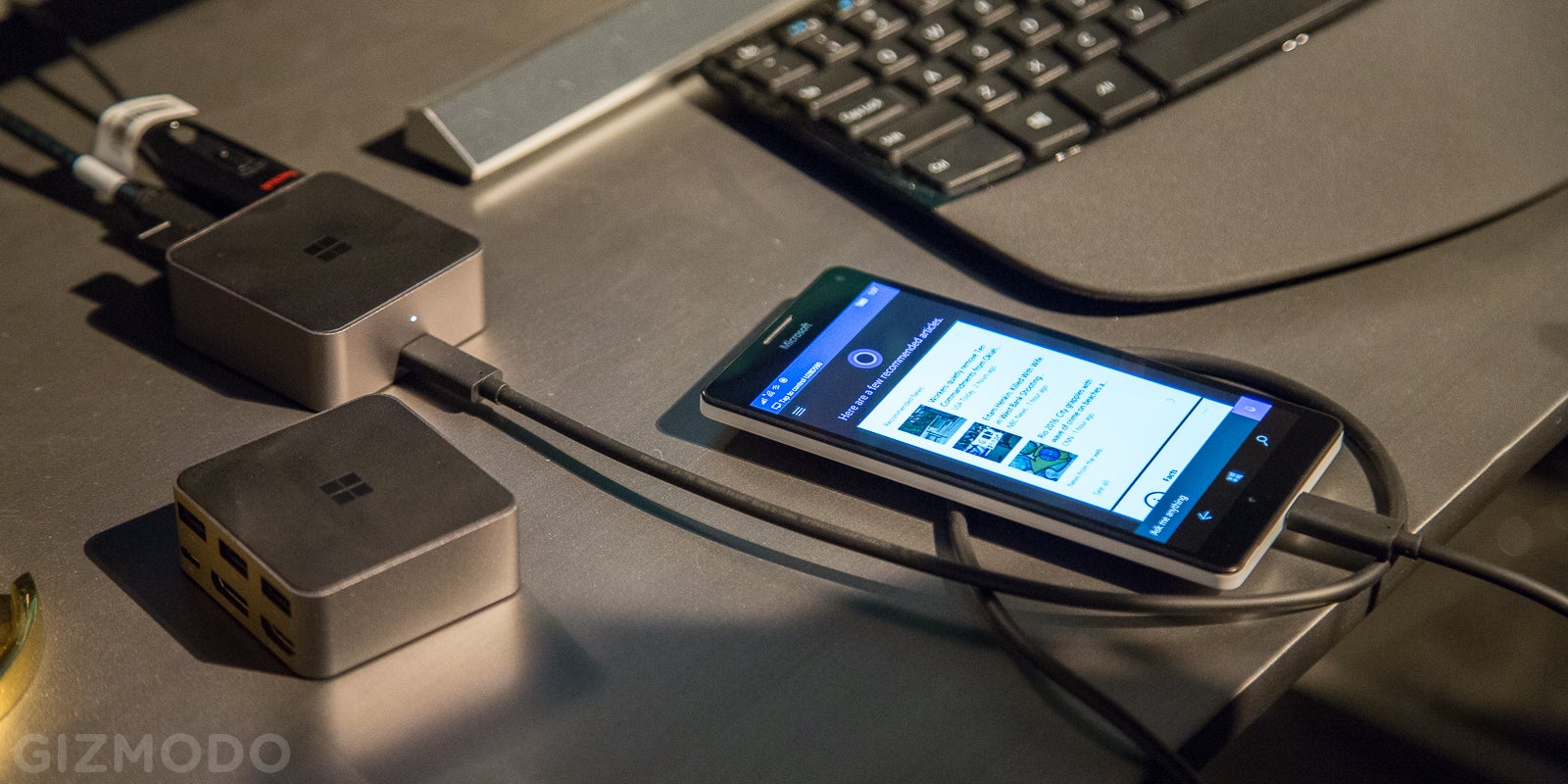 It all just feels like a feature you’d have to work into your life rather than it seamlessly integrating into it. Either way, it’s still cool as hell. Who knows, maybe it is a step toward our pocket PCs just becoming…PCs.

For brief first impressions, Windows 10 is not the silver bullet needed to slay the competition and cause some mass migration to Windows phones. It also doesn’t help that these phones are exclusive to AT&T. Wut.

But it gives something that is uniquely Windows, and rewards Microsoft loyalists with an app ecosystem that, while currently limited, offers some impressive promises for productivity. The fact that it feels like the future is just a bonus.