Life May Have Gotten Started On Earth Almost Immediately

The ancient Earth was a pretty miserable place. But from this eruptive, radiation-blasted, asteroid-pummelled wasteland, life did arise. Now, scientists have uncovered a tantalising clue that Earth’s first hardy colonizers appeared much earlier than we thought.


A team of geochemists has uncovered a piece of what appears to be biogenic graphite — carbon produced by microorganisms — deposited on Earth 4.1 billion years ago. That’s a full 300 million years earlier than the origin-of-life date found in every geology textbook. It’s older than the intense bombardment period that cratered the Moon. If the researchers’ interpretation of this sample is correct, it would imply something extraordinary.

“Life on Earth may have started almost instantaneously,” said UCLA geochemist Mark Harrison, co-author of a study which appears this week in the Proceedings of the National Academies of Sciences. “Twenty years ago, this would have been heretical.”

The origins of life are one of the murkiest aspects of Earth’s history. Not only are the fossil fingerprints of ancient microbes incredibly faint, the geologic record itself is incomplete. The first billion or so years of Earth’s history have been overwritten by plate tectonics and crustal recycling. Perhaps it’s no coincidence that the earliest chemical evidence for life on Earth dates back 3.8 billion years, to the very same moment that the continuous geologic record begins. 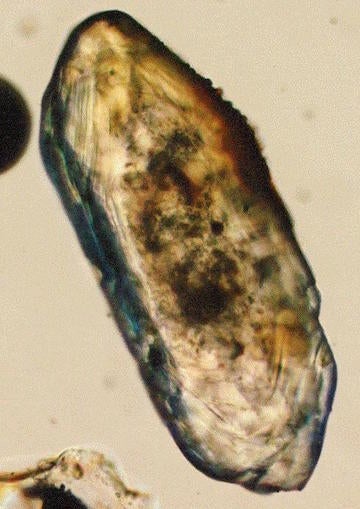 But recently, geologists have discovered that we can peer even further back in time, using fragments of ancient zircon. In several locales worldwide, zircon grains formed from molten rocks during the Hadean period (4.6 to 4 billion years ago). When zircon cools, it captures and preserves materials from its surroundings, in essence serving as a time capsule.

In the new study, researchers collected over 10,000 zircon grains from a deposit in Western Australia. From 656 grains that turned out to be older than 3.8 billion years, the researchers picked out two that contained graphite, a crystalline form of carbon. One of these grains was so cracked that the team decided to exclude it, fearing it could have picked up contamination over time.

The other grain, a 4.1 billion year old sample, was subjected to carbon isotope analysis using mass spectrometry. The researchers discovered that the isotope signature of this grain — the ratio of 12C to 13C — matched that of biological tissue. Says the study:

A high 12C/13C ratio is characteristic of biogenic carbon due to the large isotopic fractionation associated with enzymatic carbon fixation.

Our interpretation that the light C isotope signature in primary graphitic inclusions could reflect biologic processes is consistent with an estimate from molecular divergence in prokaryote phylogenetic relationships that a terrestrial biosphere had emerged by 4.1 Ga. Confirming such a connection would represent a potentially transformational scientific advance.

Of course, this is a single mineral grain we’re talking about, and as the researchers acknowledge in their paper, several inorganic processes might account for its high 12C/13C ratio. But the notion that life could have existed during Earth’s earliest period certainly warrants follow-up studies. If correct, it’d imply that our ancient world was much more habitable than once thought.

“The early Earth certainly wasn’t a hellish, dry, boiling planet; we see absolutely no evidence for that,” Harrison said.

And if the ancient Earth wasn’t a total wasteland, then perhaps other young, rocky planets aren’t, either. Complex life only features in a small sliver of Earth’s history; the period that could support microbial life is much longer. The more of our planet’s history turns out to be habitable, the better our odds of finding life elsewhere.