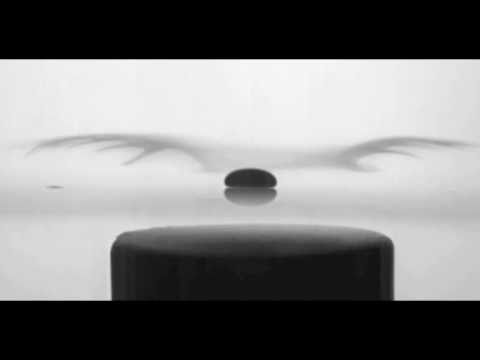 A liquid oxygen droplet flattens, rushes back and forth, and then seems to be caught in an invisible trap in the above video. Why does this happen? There are two phenomena at work here: the Leidenfrost effect and paramagnetism.

You’re most likely to see the Leidenfrost effect at breakfast, when you heat up a pan for pancakes and see drops of water rolling across the surface like marbles. The beads of water are riding on a cushion of vapour, allowing them to temporarily hover over the heat without getting boiled. To us, the drops are cool and the surface is hot, but it’s the difference in temperature that matters, not the temperature itself. The video shows a drop of cooled liquid oxygen undergoing the Leidenfrost effect on a room-temperature surface.

Then along comes the magnet. Liquid oxygen, like many other substances, is paramagnetic. This means it shows no magnetic qualities when there are no magnetic fields around, but bring in a magnet and the substance is attracted to it. The oxygen droplet flattens down to get near the magnet, or diverts its course to hover over it. This is what allows a speeding oxygen drop to be slowed, and then trapped, by a series of magnets.