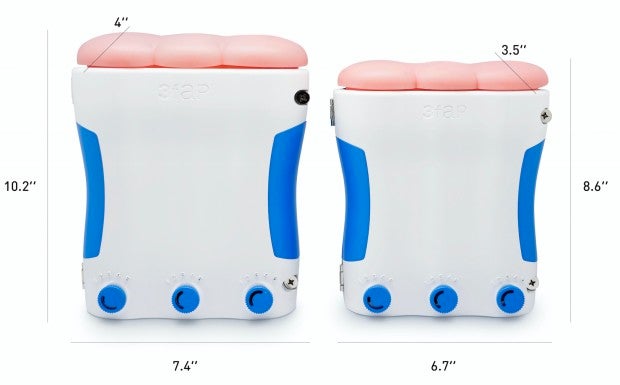 The product is called the 3Fap because apparently Sloan can’t come up with a name that’s not crudely literal. It combines 3 sleeve options, each with a different inner surface texture inside one humongous case. And although I get that a lot of guys like some variety, just look at that thing. It’s bigger than my blender, and according to the product specs on its Indiegogo page, weighs in at a hefty 3 to 4 pounds (1.3 to 1.8 kilograms).

Sloan lays out his argument for the device’s existence on the crowdfunding page:

To which I say, come on. It’s not a magic box that psychically knows which ribbing you want to shift to: if you want to change sensations you still have to lift the device off your unit to change orifices. And reach around the front to find the right suction intensity dial.

For the $US120 the company plans to ask for the 3Fap at retail, you could buy three of the handy ergonomic sleeves that are already on the market, line them up, and go to town. Brave souls can pay $US49 for backing the Indiegogo campaign. But as always, you run the risk that the project won’t go down exactly as planned. Even if it does eventually exist, you’re running the risk that pleasuring yourself with a 2 kilogram frankengadget might suck.