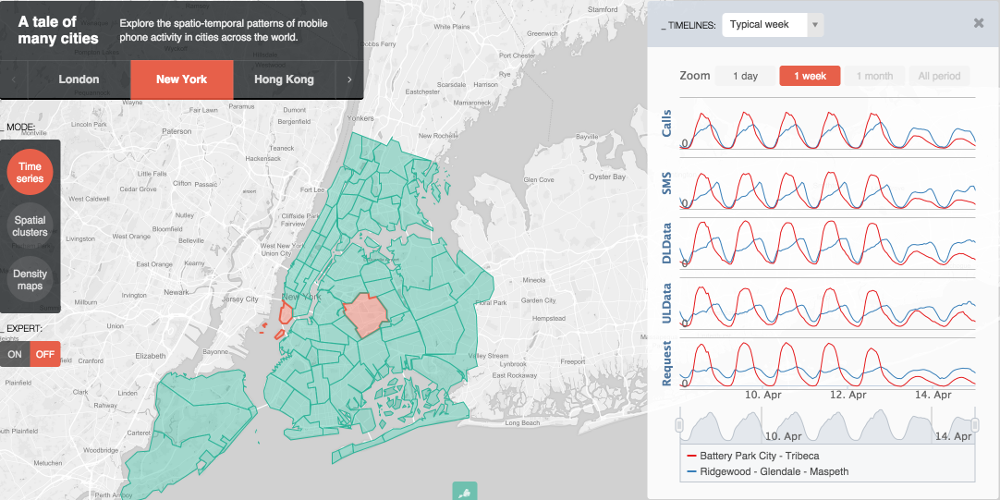 Mobile phone data can provide a rich source of information for understanding human activity. Now, researchers from MIT have built a tool that visualizes mobile phone use in cities around the world, for any of us to study.

The new tool, called ManyCities, is a collaborative effort between the SENSEable City Laboratory at MIT and Ericsson. It compiles mobile phone data — such as text message traffic, number of phone calls, and the amount of data downloaded — from base stations in Los Angeles, New York, London, and Hong Kong between April 2013 and January 2014. It's all anonymised, so there's no sensitive information on display, but there is enough data to understand usage patterns, even down the the scale of small neighbourhoods.

What's nice about the site is that there are plenty of intuitive interpretations of the data available from the get-go. So, you can see how phone use varies geographically, say, or by time, spotting the general upward trend in data use or how holidays affect the number of phone calls. And then you can dig deeper, to compare data use over time between different neighbourhoods or cities: like, how does the number of texts sent in Hong Kong compare to New York? (It peaks in Hong Kong in the morning, but in the evening in New York, by the way.)

There are other ways to look at the data, too, including smart tools that cluster different areas by usage patterns — essentially classifying regions as residential or commercial depending on phone use — or tie in demographic data, to gain a richer picture of why different behaviours are observed in different locations.

It's easy to see how this kind of data could be used by all kinds of organisations to understand behaviour in cities, providing all kinds of people — and not just telephone companies — with insights that can be used to plan and forecast activity and demand. It's a shame the data isn't available in real-time, but one suspects it might not be too long before that's the case.