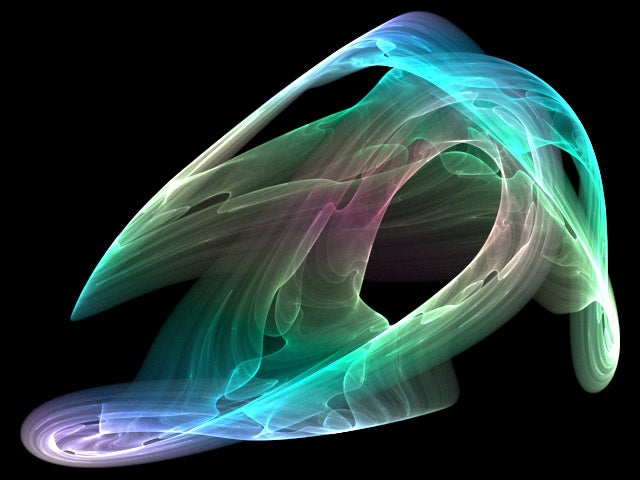 It appears that the standard tools used to identify chaotic signatures might be missing lots of hidden chaos — especially in systems that seem like they're not chaotic at all.

Chaos theory is famously associated with so-called "strange attractors", marked by a telltale butterfly-wing shape (see above). But according to a new paper by two University of Maryland mathematicians, sometimes chaos looks more like "a strange repeller", or something else entirely.

"Scientists talk a lot about chaos and they don't agree exactly on the [mathematical] definition," Brian Hunt, one of the co-authors, told Gizmodo. So when the journal Chaos asked him and his UMD collaborator, Edward Ott, to write something for its 25th anniversary, he jumped at the chance to to come with a broader definition of chaos — a kind of universal signature, if you will — that would provide a handy mathematical tool for ferreting out where chaos might be hiding in previously unsuspected areas.

When scientists talk about something being "chaotic", they don't mean it in the colloquial sense of being completely random. They mean that the system is so incredibly sensitive to early initial conditions that, as it evolves over time, it does so in unpredictable ways, obscuring the underlying rules of order. The classic example is the "butterfly effect": a buttery flaps its wings in Brazil and causes a tornado in Texas. This is in sharp contrast to a simple linear system - say, the swinging pendulum on a grandfather clock — where if you know a few key variables at any given point in time, it's a fairly trivial matter to predict how the system will behave. Tell me what's happening now, and I can use the laws of physics to tell you what will happen next, or what happened before. Those kinds of system are deemed "deterministic."

Alas, most real world systems aren't that simple — even those that technically qualify as deterministic, like predicting the trajectories of billiard balls after the break. Still, if you could gather enough information, in principle you'd be able to make predictions, especially with the help of a powerful computer.

But a chaotic system — the weather is the most common example — is inherently unpredictable because there are so many interlinked variables, that even a tiny change in one of them gets amplified over time through a kind of feedback loop until the system goes critical. Here, let bad boy mathematician Ian Malcolm (he who suffers from "a deplorable excess of personality") explain:

This is true whether we're talking about traffic, the stock market, the weather or the pattern of brain waves during an epileptic seizure — or an ill-fated dinosaur amusement park. Yet once again how chaos plays out in the real world is a bit messier. You might not get perfect agreement between your fancy computer simulation and experimental results if you're trying to model how water flows through a pipe or the flocking of birds, for instance, or mapping out the orbits of asteroids. "It may look like chaos at first and then settle down to something more predictable," Hunt explained. "Or there are rare chaotic systems that persist forever."

Imagine four shiny Christmas bulbs stacked into a pyramid. If you try to track the light particles (photons) that reflect off those spheres, most will follow clean, predictable trajectories, but every now and then one will get trapped inside the pyramid, bouncing back and forth. That photon's path is extremely chaotic, but you might not pick up on it using the usual equations. You have to know where to look to find the hidden chaos.

This is because there may be hidden variables within the system itself, in addition to the known outside variables affecting how the system evolves. So you can't just focus on small variations early in the system's evolution — the essence of the traditional definition of chaos. You also have to monitor those external factors that continue to influence how things evolve over time. The distinction is subtle, but it's important if you're trying to better understand, and possibly control, complex chaotic systems. Think detecting hidden pockets of turbulence in the atmosphere (the bane of pilots everywhere), or regulating pacemakers.

That's where Hunt and Ott come in. "Our definition of chaos identifies chaotic behaviour even when it lurks in the dark corners of a model," Hunt said. They found their magic bullet in the concept of entropy, that is the reason you can scramble an egg but can never unscramble it back to its original pristine form. It can also serve as a kind of stand-in for chaos in equations, although the usual mathematical definitions of entropy are so stringent, they're not particularly useful to apply to real-world systems.

Hunt and Ott proposed a new type of quantity they've dubbed "expansion entropy" that is more flexible, and serves as an excellent stand-in for chaos in their broader mathematical definition. It's exactly the kind of broad-based tool researchers could use to spot a system about to spiral into chaotic unpredictability — like when all hell is about to break loose because your cloned dinosaurs insist on behaving unpredictably. I'm thinking Ian Malcolm would approve.

George Dvorsky 04 Apr 2020 2:30 AM
Space is hard. We now have another reminder of this sad fact, as a prototype of SpaceX’s next-gen rocket collapsed in on itself during tests this morning, in what is now the third incident of its kind for the Starship program.