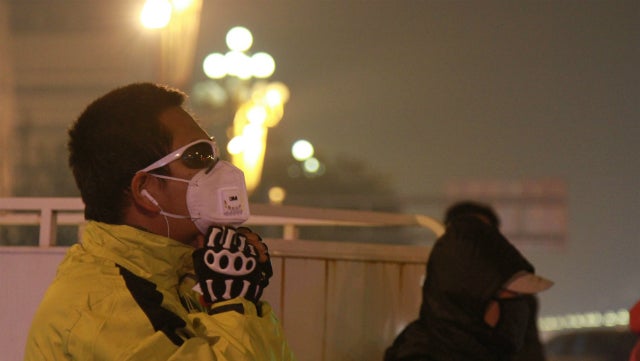 The same company that made Jeopardy!-conquering Watson will use similar tech to help fight air pollution in Beijing. In the future, that artificial intelligence could lead to cleaner air for the long haul, everywhere.

According to MIT Technology Review, IBM’s rolling out a plan that predicts when and where Beijing’s pollution levels will be the worst, 72 hours ahead of time. How’s this helpful? Think of it as a next-gen air quality forecast. Pollution levels, on a more micro level within a city, can vary widely. IBM’s new project, called Green Horizon, combines pre-collected city data with abilities to learn over time and predict repeated patterns. This helps the city make extremely specific calls, like temporarily capping the amount of cars on the streets in areas predicted to be hit hard, MIT says.

See, one of the main challenges for AI developers is getting the system (a computer program, a robot, whatever) to automatically adjust to changing situations, just like a human can. It’s called “adaptive machine learning.” In this case, the system (which uses the same language and statistical processing abilities as Watson) takes massive amounts of complex data from the past, and makes specific suggestions for the future — days in advance. IBM says the Green Horizon is 30 per cent more precise than current pollution-tracking models.

The Chinese capital has long struggled with sky-high levels of air pollution. But the country’s doing good too: It’s championed maglev trains for over a decade, and its behemoth solar panel market straight up eclipses the rest of the world’s. In the first four months of 2015, China’s coal use plummeted 8 per cent.

Still, China remains Earth’s largest emissions-spewing country, with the US sitting at number two. IBM says it wants to take the Green Horizon tech elsewhere in China, and to other pollutive countries, as well. First, Watson conquered Ken Jennings; maybe in the future, it will conquer terrible air quality worldwide.