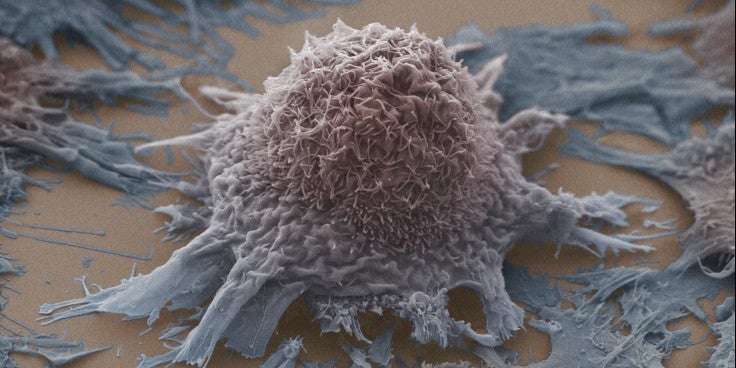 All the cells in our bodies are programmed to die. As they get older, our cells accumulate toxic molecules that make them sick. In response, they eventually break down and die, clearing the way for new, healthy cells to grow. This "programmed cell death" is a natural and essential part of our wellbeing. Every day, billions of cells die like this in order for the whole organism to continue functioning as it is supposed to.

But as with any programme, errors can occur and injured cells that are supposed to die continue to grow and divide. These damaged cells can eventually become malignant and generate tumours. In order to avoid their programmed cell death in this way, cancer cells reorganise their metabolism so they can cheat death and proliferate indefinitely.

Cancer researchers have known for decades that tumours use a faster metabolism compared to normal cells in our body. One classic example of this is that cancer cells increase their consumption of glucose to fuel their rapid growth and strike against programmed cell death. This means that limiting glucose consumption in cancer cells is becoming an attractive tool for cancer treatments.

You may have seen articles or websites advocating that starving patients of sugar is crucial for getting rid of tumours or that eating less sugar reduces the risk of cancer. The story is not that simple. Cancer cells always find alternatives to fuel their tank of glucose, no matter how little sugar we ingest. There is not a direct connection between eating sugar and getting cancer and it is always advisable to talk to your doctor if you have doubt about your diet.

Researchers have demonstrated that cancer cells use glucose to generate the building blocks of the cellular compounds needed for rapid tumour growth. They also use it to generate molecules that guard against the toxic accumulation of reactive oxygen species, the cell-damaging molecules that activate programmed cell death. This means that glucose serves as a master protector against cell death.

If the amount of sugar we eat doesn't affect this process, the question we need to answer is how the cancer cells are instructed to consume more glucose. Who is filling the fuel tank? We have discovered that what allows tumours to evade their natural cause of death in this way is a protein that is overproduced in virtually every human cancer but not in normal cells.

In a recent study published in Nature Communications we showed that cancer cells stimulate the over-production of the protein known as PARP14, enabling them to use glucose to turbocharge their growth and override the natural check of cell death. Using a combination of genetic and molecular biology approaches, we have also demonstrated that inhibiting or reducing levels of PARP14 in cancer cells starves them to death.

The best news is that by comparing cancer tissues (biopsies) from patients that has survived cancer and those that have died, we have found that levels of PARP14 were significantly higher in those patients that have died. This means that levels of PARP14 in cancer tissues could also predict how aggressive the cancer would be and what the chances are of a patient's survival.

This means that a treatment which could block the protein could represent a significant revolution in the future of cancer treatment. What's more, unlike traditional chemotherapy and radiotherapy, the use of PARP14 inhibitors would only kill cancer cells and not healthy ones. The next step is to design and generate new drugs that can block this protein and work out how to use them safely in patients.

Concetta Bubici is a Lecturer in biomedical science at Brunel University London and Salvatore Papa is a Senior scientist at the Institute of Hepatology, Birkbeck, University of London.