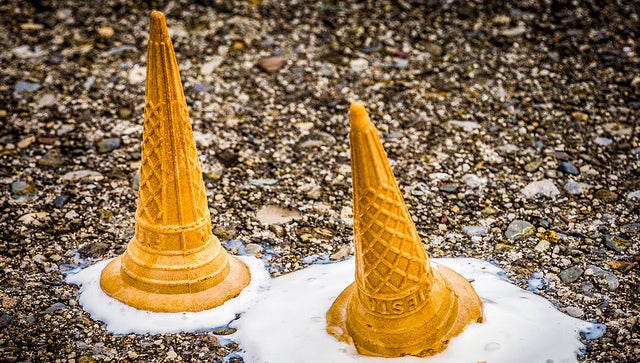 In a game-changing breakthrough that will usher in a golden age of peace and prosperity, scientists have figured out how to make ice cream that doesn't melt so goddamn fast.

We've all experienced the sense of crushing defeat that follows buying an ice cream cone on a hot summer's day, only have to have it melt into a sticky, nasty, inconvenient mess all over our hands. And how many tears have been spilled the world over by bereft children whose ice cream scoops literally melted off the cone faster than they could be slurped down? These are pressing issues that threaten to destabilise the very foundation of our society.

Thankfully, science has the answer. This week, researchers at the Universities of Edinburgh and Dundee announced the discovery of naturally occurring protein that can be added to ice cream to make it more melt-resistant. The protein, known as BslA, adheres to fat droplets and air bubbles, rendering them more stable in a mixture. Most importantly: It doesn't seem to affect the taste.

Beyond the obvious consumers perks of melt-resistant ice cream, the protein could reduce the need for manufacturers and distributors to keep their product in a deep freeze, cutting down on energy costs and saving the planet. It may pave the way for ice cream makers to concoct new recipes with lower saturated fat levels, with far-reaching effects on public health and well-being. AND it could reduce freezer burn, those unsavoury ice crystals that form when your ice cream thaws and refreezes. I'm not sure how many half-eaten, frosted pints of ice cream make their way into the garbage every year, but I bet somebody knows, and I bet there's an aggregate statistic out there comparing these devastating losses to the caloric needs of a small city.

Science has been telling a lot of unpleasant truths lately — did you know that humans have eliminated half of planet Earth's trees? — but every now and again, something like melt-proof ice cream comes along, and I feel a little less terrible about the future.