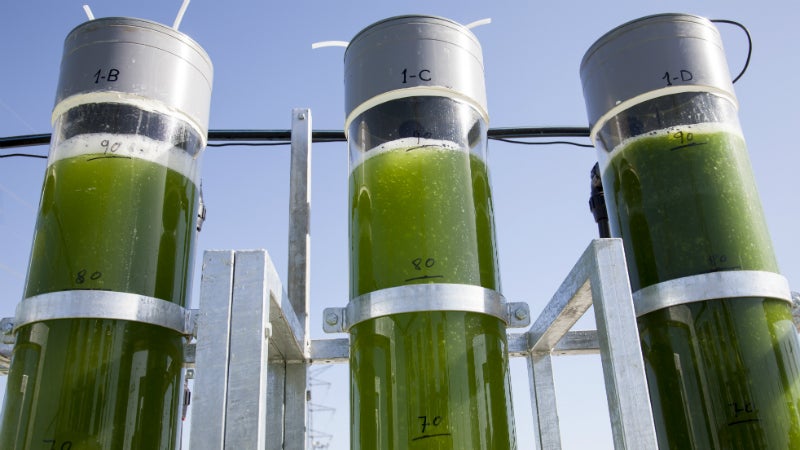 In the ongoing search for a non-nuclear energy, Fukushima could find a partial answer in living, green, microalgae. And algae can help the rest of the world, too.

A Japanese think tank tells the Asahi Shimbun newspaper that universities and other groups in the area are working to mass produce an algae native to Fukushima. The coastal prefecture in northern Japan suffered nuclear meltdown following the massive earthquake in 2011. Algae sucks in carbon dioxide to produce natural oil, making it an attractive biofuel. Tests have apparently shown that the Fukushima algae is able to survive cold winters, which gives algae an edge over other alternative biofuels based on corn.

We previously reported about the joys of algae: It sucks in carbon emissions, there's no import cost, it grows at lightning fast rates, and can produce 60 times more oil per acre than plants grown on land.

The biggest problem, whether we're talking Japan, Australia, or anywhere else, is that algae is extremely expensive. In the case of Fukushima, a litre of algae oil costs up to 300 yen, or around $AUD3.50. That number needs to be chopped down to 100 yen (around $AUD1.17) for this venture to be viable from a money standpoint, Asahi Shimbun says.

Algae isn't the only alternative energy Fukushima's been seeking out in recent years. Wind power is another one: Back in June, the world's largest floating wind turbine was completed in Fukushima, part of a larger plan to beef up wind power there.

Of course, nuclear energy still outstrips wind and algae in terms of megawatts of electricity produced. But they're alternatives attractive to the planet's most quake-prone nation. Still, last month, Japan started reactivating its nuclear plants.