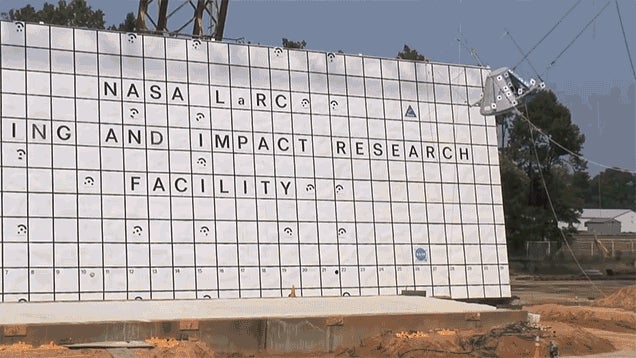 Real-life crashes are terrifying, but simulated crashes are not only important for safety research, they're also really, really fun to watch. So NASA's Langley Research Center posted this montage of crash tests that's as good a way as any to start a Tuesday morning.

Originally built way back in 1965 to test the lunar landing module and touchdown procedures for the Apollo moon missions, the 73m high, 122m long Landing Impact and Research Facility at NASA's Langley Research Center in Hampton, Virginia, is now used for crashing everything from rover landers, to planes, to helicopters.

It almost looks like the ultimate toy for anyone who deliberately put their Hot Wheels cars or toy trains on a crash course as a kid. But there's some legitimate science being done at this facility. This means that, yes, people actually get paid to crash stuff here — best job in the world.