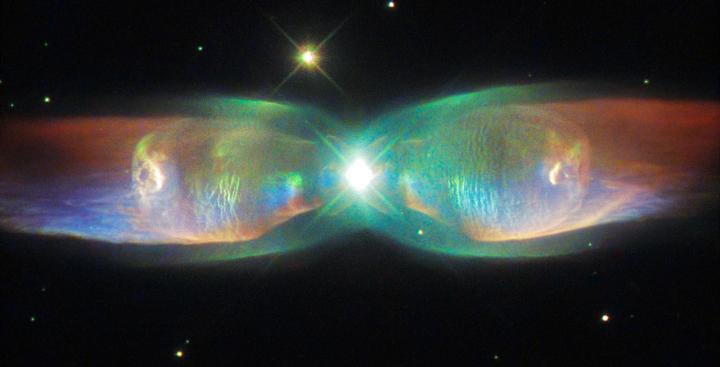 Image Cache: Deep space is a wonderland of strange and awe-inspiring sights, but few astronomical curiosities match the exquisite beauty of the Twin Jet Nebula, a dying, binary star that looks like a pair of iridescent butterfly wings.

The image above, captured by the Hubble Space Telescope and released to the public today, shows off the remarkable complexity of the so-called bipolar nebula's two shimmering lobes. But don't let their delicate facade fool you: These cosmic clouds are enormous jets of star stuff, streaming off into space at speeds in excess of 600,000 miles per hour.

Ordinary planetary nebulae have one star at their centre, bipolar nebulae have two, in a binary star system. Astronomers have found that the two stars in this pair each have around the same mass as the Sun, ranging from 0.6 to 1.0 solar masses for the smaller star, and from 1.0 to 1.4 solar masses for its larger companion. The larger star is approaching the end of its days and has already ejected its outer layers of gas into space, whereas its partner is further evolved, and is a small white dwarf.
Within the wings, starting from the star system and extending horizontally outwards like veins are two faint blue patches. Although these may seem subtle in comparison to the nebula's rainbow colours, these are actually violent twin jets streaming out into space, at speeds in excess of one million kilometres per hour. This is a phenomenon that is another consequence of the binary system at the heart of the nebula. These jets slowly change their orientation, precessing across the lobes as they are pulled by the wayward gravity of the binary system.

How big is the Twin Jet Nebula? Well, according to NASA, there's a thick disk of material surrounding the binary star and extending outwards in an orbit fifteen times wider than that of Pluto. In this image, it's much too small to be seen.