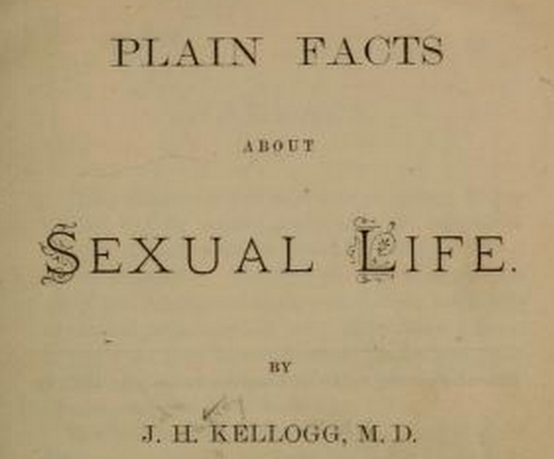 We know John H. Kellogg as the man who invented Corn Flakes and unleashed bran-filled diet fads on an unwary 19th century public. But he was also the author of an influential sex education book that was all about the dangers of self-pleasuring.

Plain Facts about Sexual Life was first published in 1877, with an expanded version released in 1879. In it, Kellogg argued that the facts about reproduction shouldn't be hidden from children. Instead, they should be taught about sex, preferably by their parents, when they first became curious about it. The book aims to help embarrassed parents, with reasonably straightforward biology lessons about reproductive habits of many different living things, including flowers, bees, and humans.

It covers subjects like basic male and female anatomy, the role of sperm and egg, the physical changes of puberty, embryonic development and birth.

Children are naturally sociable, almost without exception. They have a natural dread of being alone. When a child habitually seeks seclusion without a sufficient cause, there are good grounds for suspecting him of sinful habits... They should be carefully followed and watched, unobserved.

Again, that the seminal fluid is the most highly vitalized of all the fluids of the body, and that its rapid production is at the expense of a most exhaustive effort on the part of the vital forces, is well attested by all physiologists. It is further believed by some eminent physicians that the seminal fluid is of great use in the body for building up and replenishing certain tissues, especially those of the nerves and brain, being absorbed after secretion.

He notes, after making this statement, that not all physiologists agree. Presumably those were the physiologists who insisted on actual experimental evidence.