When it launches in October 2018, the James Webb Space Telescope will become the largest optical telescope in space. With its 6.5m wide mirror, it will gather infrared light from up to 13.5 billion light years away, giving astronomers a look at the earliest moments of the universe. But the mirror is too big to launch in one piece.

The James Webb is scheduled to launch aboard an Ariane 5, which has a maximum payload diameter of 5m. That's one of the biggest constraints on what we can put into space: If it's too wide to fit on the rocket, it can't fly. So James Webb's mirror is made up of 18 hexagonal segments, mounted on a folding framework. They will fold up to fit aboard the rocket, then unfold when the telescope reaches space.

Most of the largest ground-based telescopes also have segmented mirrors, because they're easier to build and maintain than big, solid mirrors. Solid mirrors need heavier framework to hold them up, and big ones tend to sag a bit, distorting the telescope's images. It's nearly impossible to build and support a solid mirror larger than about eight or nine meters, and its a challenge for anything larger than five meters.

The mirror segments are made of a light, strong metal called beryllium, which can withstand the extreme temperatures of space without warping; glass, on the other hand, tends to deform at very cold temperatures. NASA's Spitzer Space Telescope, launched in 2003, also has beryllium mirrors.

Small fractions of a millimetre make a big difference in a telescope mirror, so technicians meticulously polished, tested, and re-polished each mirror segment before adding a thin coating of gold. Gold reflects infrared light very well, so the thin gold layer will help focus the light of distant objects into Webb's instruments.

The gold is only about 100 nanometres thick. For comparison, 100 nanometres is also about the size of the biggest particle that can fit through a surgical mask. If you were looking at the mirror segments from the edge on, the thickness of the gold layer wouldn't be visible with the naked eye, but it drastically changes the appearance of the mirror segments. In this image, the segment on the left has received its gold coat, while the one on the right is still uncoated, so you can see the polished beryllium. 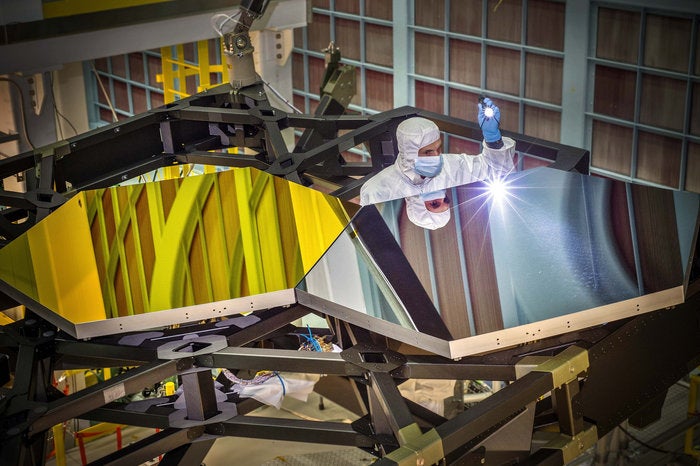 Since the picture was taken, all 18 segments of Webb's mirror have received their shiny gold coatings, along with a thin coat of glass to help protect the gold from scratches.