Scientists Have Grown Human Serotonin Neurons In The Lab 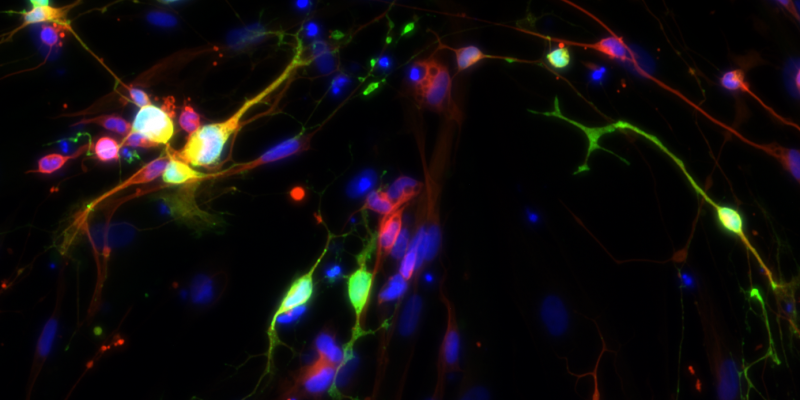 This flurry of neon colour above may look like a blurry photography of a particularly wild party, but in fact it's the first ever sample of human serotonin neurons to be grown in the bottom of a Petri dish.

Scientists have long known about serotonin neurons — which release and take up the neurotransmitter, which is linked to mood and mental states — but they have never been able to grow them in the lab. Instead, they have used animals samples to study how they work. Now, researchers from the University at Buffalo have grown human serotonin neurons from fibroblasts — the cells that usually create the connective tissue in the body. The serotonin neurons can be seen in green in the above image.

The researchers hope that the technique could be used to grow serotonin neurons from cell samples taken from patients suffering from illnesses involving the neurotransmitter. In turn, it may be possible to better understand the kinds of mood-related illness that affect many patients — and develop tailored treatments.

The team also thinks that its technique could help create other kinds of cells that have been hard to grow outside the body in the past. "This research shows that it is possible to convert one type of cell into other types that have been difficult to access, such as neurons or heart cells," he told Medical Express. "Sooner or later, we will find out what those combinations are so that we can regenerate cells and eventually tissues that will mimic the real cells and tissues in the body."

Soon, We're All Going To Know What A Live-Action Jiminy Cricket Looks Like