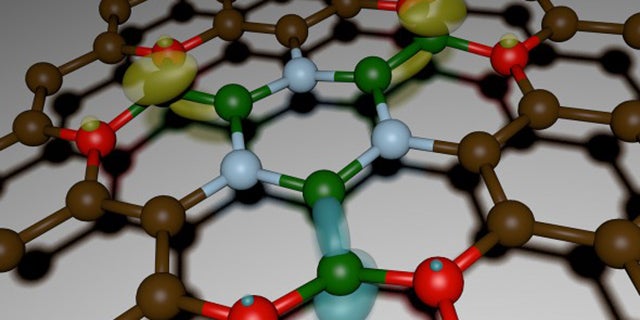 When physicists Swastik Kar and Srinivas Sridhar were tasked by DARPA to modify graphene so that it provided thermal sensitivity like that of infrared imaging devices, they didn't know what they'd end up with. Now, through hard work and a little luck, they have a new kind of super material on their hands.

PhysOrg explains the pair approached the task with open minds, "on a journey, creating a new path, a new direction of research." In fact, they started by adding elements they'd worked with in the past to the carbon-based material to see what happened. They found that the addition of boron and nitrogen turned graphene into an electrical insulator — but something funny was happening as they did so.

As they added elements to the mix, they were frustrated that oxygen was adding itself — and there seemed to be nothing they could do to stop it. "We realised we could not ignore the role that oxygen plays in the way these elements mix together," Kar explained to PhysOrg. "So instead of trying to remove oxygen, we thought: Let's control its introduction."

In fact, they found that the carefully controlled presence of oxygen determined the way boron and nitrogen — an in fact the oxygen itself — inserted themselves into graphene's structure. And with such care, they found that the new material, called 2D-BNCO, exhibits some amazing material properties. In fact, as well as the thermal sensitivity DARPA requested, it displays magnetic, optical, and electrical properties unlike those of graphene. The results are published in Science Advances.

The researchers suggest that it could be used to create new kinds of ultra-sensitive camera and night vision sensors, or even atomically thin transistors. But — and there's always a but — the researchers now need to establish if the careful manufacturing conditions can actually be replicated at scale to produce 2D-BNCO in useful-enough quantities. We sure hope so.

Using A DNA-Based 'Computer,' Scientists Get The Square Root Of 900

Ryan F. Mandelbaum 19 Jan 2020 1:00 AM
Using a computer-like system made from engineered DNA, scientists have computed the square root of 900.