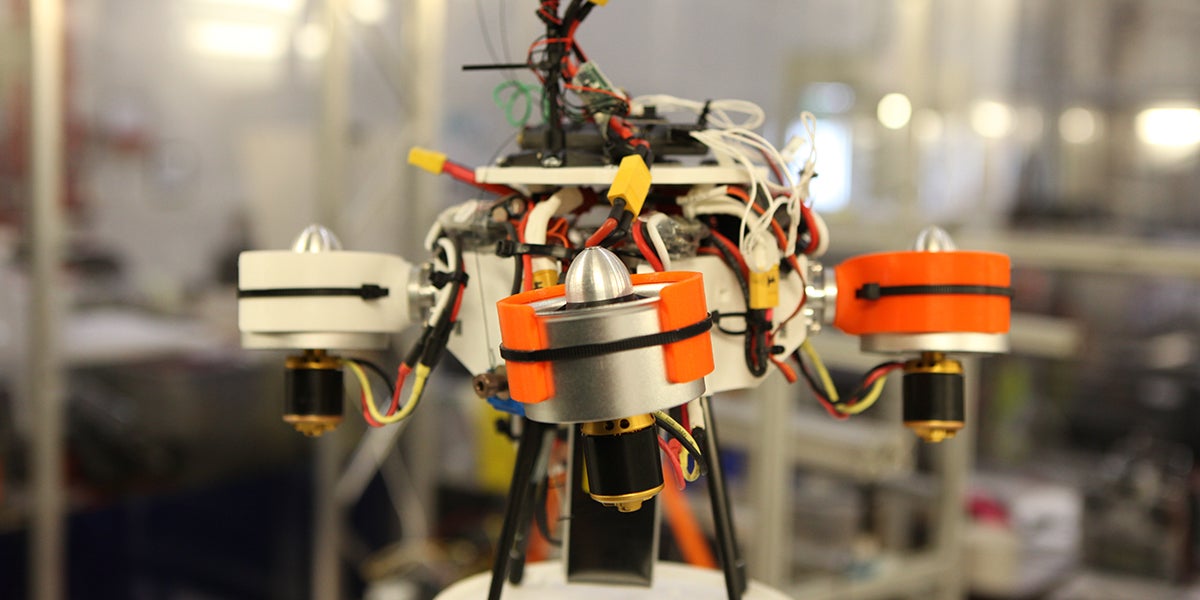 This might look like a slightly ramshackle home-brew drone, but in fact its a new kind of robotic vehicle developed by NASA that "can gather samples on other worlds in places inaccessible to rovers".

The new drone has been developed by Swamp Works engineers at NASA's Kennedy Space Center in Florida, and it's being built as a kind of prospecting robot. "The first step in being able to use resources on Mars or an asteroid is to find out where the resources are," explains Rob Mueller, who's been working on the project, in a press release. "They are most likely in hard-to-access areas where there is permanent shadow. Some of the crater walls are angled 30 degrees or more, and that's far too steep for a traditional rover to navigate and climb."

So NASA's solution is what it calls Extreme Access Flyers. These craft, which seem to resemble quad-copter drones, would be able to "travel into the shaded regions of a crater and pull out small amounts of soil to see whether it holds the water-ice promised by readings from orbiting spacecraft." Unlike Earth-bound drones, though, they use gas jets instead of rotors — because the alien atmospheres like those of Mars and the Moon would be too thin to support spinning blades.

Perhaps several of the drones would be taken to the surface of other worlds aboard a lander, which they'd used as a base to fly from using autonomous navigation systems. The lander would also act as a support unit, with the drones relying on it for the replenishment of batteries and propellants between flights. Speaking or propellants, NASA's hope is to have the drone's jets run on something like oxygen or steam water vapour — so, in theory, it may even be able to fuel itself from the planet it's on. Indeed, NASA explains just what it may find while its's there:

In addition to scouting craters for water and other elements that can be processed into fuel for large spacecraft and air for humans, the flyer would be capable of exploring lava tubes that are known to exist on Mars and the moon and are found in many volcanic areas on Earth. Because some are thought to be 30 feet or bigger in diameter, an extreme access flyer could navigate autonomously during a robotic precursor mission and find a safe place for astronauts during their journey to Mars.

While the project started two years ago, the team has been using rapid advances in commercially available drones to keep the work moving at speed. "The flight control systems of small, unmanned multi-rotor aerial vehicles are not too dissimilar to a spacecraft controller," explains Mike DuPuis, one of the researchers. "That was the starting point for developing a controller." In fact they have already developed several small craft, from a flyer the size of a person's palm to a large quad-copter about five feet across that uses ducted gas fans to fly.

The latter, NASA claims, is the kind of size of drone that would likely be used on a mission to Mars or the Moon. It's not yet clear when such a mission might happen, though.

[NASA via The Atlantic via The Verge]