The Fat Jew's Joke Theft Excuse: 'I Was Drinking A Daiquiri Nude' 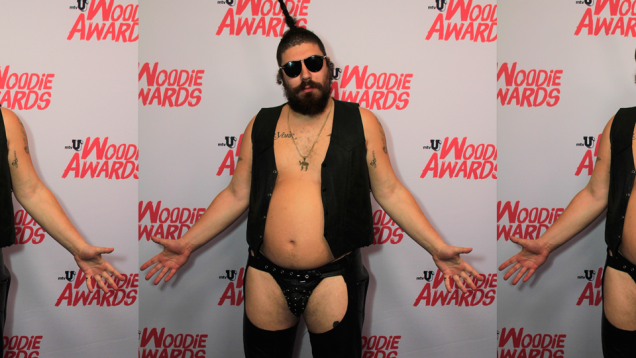 The internet's most-hated joke-stealing Instagram aggregator has been eating shit all week, losing a Comedy Central deal after getting called out for ripping off comedians online. Now, Josh "The Fat Jew" Ostrovsky is making excuses for his long history of digital plagiarism. Unsurprisingly, his excuses are terrible.

Ostrovsky isn't the only person building a career by stealing jokes on the internet. Accounts like FuckJerry do the same thing. Joke theft on Twitter got so bad that the company now lets comedians file DMCA complaints if they see people stealing their material. But the man known as Fat Jew is the most high profile offender.

Ostrovsky told Vulture's Jesse David Fox that he's going to go back through every one of his thousands of purloined posts to give the people he stole from credit:

I'm working to add attribution to every one of my posts, and will continue to do so. My email address is up. I urge people to reach out and say, "That's my thing." I would love to give credit. I want people to shine on social media, I always have. And I will never again post something that doesn't have attribution, because I realise now that when the stage is large enough, and the voice is large enough, these things matter.

Can we believe him? No. "I'd love to give credit" is a hollow apology coming from someone who built his entire career off stealing jokes. And Ostrovsky continues to deny that he stole jokes. This is his response after Fox asked if he'd ever stolen jokes:

I mean, no, not intentionally. If something was heard and written down, then that's probably what happened. I didn't realise that if you don't have a source for something, then you couldn't necessarily post it. I don't think that was always clear. I'm very on the cutting-edge of the internet. I'm up on a lot of the newest shit first. So, if I didn't realise all this about attribution and sources, there are probably other people who also don't. I'd like to set the standard. If I'm the person who has been made to realise that, then everybody else can follow.

In Fat Jew logic, he's at the forefront of internet culture, yet every stolen joke had been told to him by someone else to the point where he couldn't pin down where he heard it or where it came from. Right.

One of the most famous examples of Ostrovsky's joke theft is when he ripped off Davon Magwood's tweet comparing the outrage over Cecil the Lion to apathy over the treatment of black Americans. This is what Ostrovsky said after Fox asked why he didn't bother crediting Magwood:

It wasn't a matter of diligence. I was drinking a daiquiri nude and looking at the internet, and honestly, I didn't know where it came from.

Ostrovsky also flat-out denies that he or his interns cropped screenshots before reposting so people couldn't see what the original source is — even though anyone who has eyes can see that Fat Jew posts are cropped to omit the source:

I have never done that. Not once. I want people to get credit for stuff. You have to understand that the internet is like this giant Jacuzzi of insanity, and it's just filled with so much stuff. I would never take someone's name off something. That's not who I am or what I'm about.

Just to clarify what a heap of horse hockey that is, here's a Twitter joke from Ben Rosen:

Just a man enjoying a bottle of wine on a romantic date with his bulldog. pic.twitter.com/inpIicQ6yj 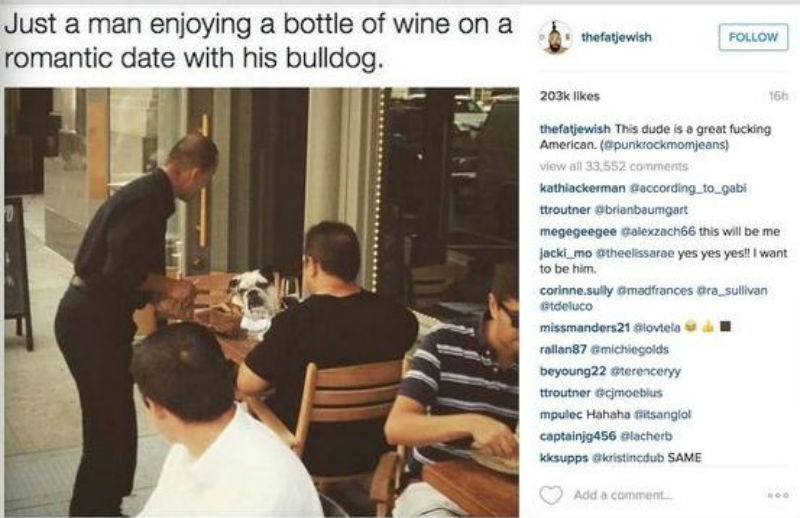