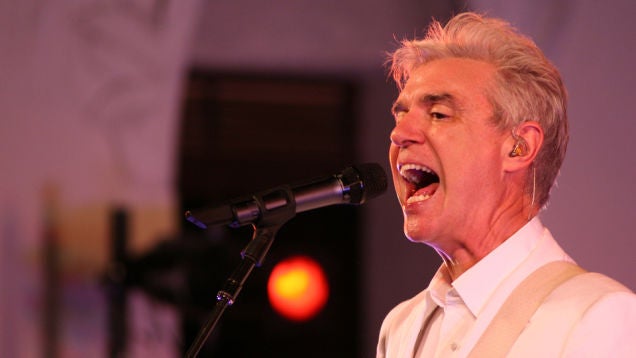 David Byrne, well-known recording artist and performer, has written a stirring op-ed about streaming music and the plight of musicians in today's recording industry. He's right about the problems, but his solution seems a little... far-fetched.

So here's the problem according to David Byrne. These days famous musicians, like David Byrne and Pharrell Williams, can get by with the minuscule payments they make per song stream on services by Spotify because subscribers to those services stream a lot of their music. But for smaller up-and-coming artists, this is not a living. Not even close.

Lots of people like to blame Spotify, Apple Music and the like for this problem, but as Mr Byrne points out, they're at least partially powerless to do anything about it. These services pay a huge amount of their revenue to record labels, which in turn pocket most of the revenue. Artists, especially those affiliated with the big three major labels, take home a very small part of the streaming loot. We went through this last year when Taylor Swift launched her assault on Spotify. The labels are screwing artists over as they have for time immemorial.

Part of the problem, according to Byrne, is that labels are maddeningly opaque about how much they pay artists and who they pay what and why. He notes:

One industry source told me that the major labels assigned the income they got from streaming services on a seemingly arbitrary basis to the artists in their catalogue. Here's a hypothetical example: Let's say in January Sam Smith's "Stay With Me" accounted for 5 per cent of the total revenue that Spotify paid to Universal Music for its catalogue. Universal is not obligated to take the gross revenue it received and assign that same 5 per cent to Sam Smith's account. They might give him 3 per cent — or 10 per cent. What's to stop them?

Byrne's solution to the whole problem is transparency. If the labels opened their "black boxes" and revealed the details of their financial exploitation of musicians, the entire music industry would flourish. (Byrne actually uses the word flourish.) He's not clear on how transparency would necessarily benefit artists who won't make much on the micropayment economy of streaming one way or another.

I'm willing to submit that David Byrne (I LOVE U!) is right in his analysis, and his reporting only makes the bigwigs in the recording industry look like bigger arseholes than they ever have before. I'm just curious why he thinks that now, after decades and decades of being terrible, the big labels would stop treating musicians like garbage.