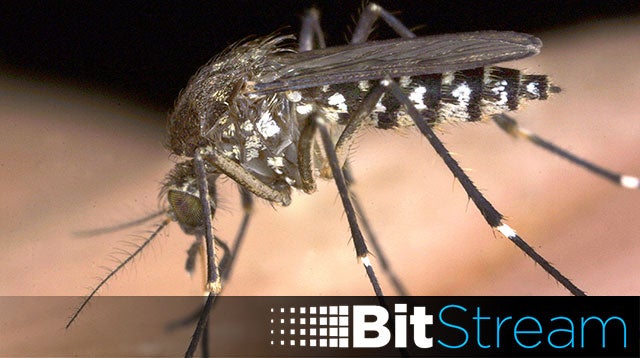 Google, soon-to-be Alphabet, is in the business of thinking up weird futures. Internet delivered by giant condom-looking balloons? Yep. Phones you can rip apart and piece back together? You betcha. Creating genetically-modified mosquitoes to fight malaria? Of cour — wait, what?

According to a report by The Information, Linus Upson, an exec within Google who helped create Chrome, wants to start a project looking at GMO mosquitoes as a way to fight malaria and Dengue fever all around the world. The idea is an interesting one if not exactly 100 per cent original. Companies like the British-based Oxitec have conducted controlled experiments with modified mosquitoes for years, starting with the Cayman Islands in 2010. Earlier this year, Oxitec submitted for approval from the FDA to send GMO mosquitoes in the Florida Keys to help combat the spread of Dengue fever.

However, the FDA has some concerns and local residents saw themselves as "guinea pigs" for some Jurassic Park-esque experiment, according to The Washington Post. However, the experiment was carried out in Brazil with huge success, seeing a 95 per cent drop of disease carrying insects.

If there's one thing that Google can lend to the GMO mosquito conversation, it's funding and a sense of legitimacy. The project is still in the early planning phases so we may not hear about any official news or study results for some time, but it would be one of the first projects that would fall squarely inside Alphabet's more experimental wheelhouse rather than Google's own.

[The Information via Business Insider]

iPad Mini Gets More Tricks: Despite its, well, miniature size, Apple will be bringing splitscreen app support to the upcoming Mini 4, according to 9to5Mac. Aside from some new software tricks, it will be coming with a faster processor, too — at the very least, we can expect the Air 2's A8 processor. Seems like a better update that just gold.

PastC More Like It: CurrentC, the mobile payments app backed by Wal-Mart and CVS, may not launch in 2015 at all, making it a solid two years behind Apple pay and lots of other mobile payment options. Previous partners Rite Aid and Best Buy have seemingly given up on CurrentC's mobile payment promise. It's ship-jumping time. [Recode]

Facebook's Twitter: Facebook is already becoming a formidable force in how news is delivered in the digital age. Business Insider has reportedly seen internal screenshots of an upcoming app that will allow publishing partners to blast out breaking news to users smartphones. Potentially useful? Yes. Annoying? Most likely. But the service is supposedly in the earlier stages, so it might be a while before we see exactly what form Facebook's new app will take. [Business Insider]

PS4, Now With YouTube Livestreaming: It's no longer just a games thing. Livestreaming is everywhere, and a leaked firmware update for the PlayStation 4 suggests that YouTube livestreaming will be coming to the PS4. You can also upload clips to YouTube, albeit only 10 seconds, which seems pretty limited. Still, the idea of easily streaming your gaming sessions to the largest online video website seems like a good one. [Gematsu]

Could You Charge an iPhone With the Electricity in Your Brain?

Paranoia Made Me a Better Computer User