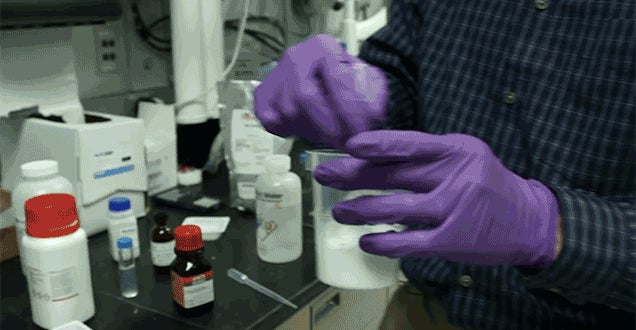 The sun's harsh rays don't just turn metal surfaces into flying pans, they can also accelerate deterioration and corrosion, and make it harder to keep structures cool. So researchers at Johns Hopkins Applied Physics Laboratory created a new type of paint made of glass that reflects those rays away.

The sun is the enemy of traditional paints, which are made from polymers. The sun's ultraviolet rays degrade polymers, which is why the paint on the side of a building will slowly fade over time. And while it degrades, it releases volatile compounds that can harm the environment.

But the paint developed by Jason J. Benkoski and his team at Johns Hopkins is resistant to the fading that affects traditional paints. Made from a mixture of silica (one the main ingredients of glass) and potassium silicate so it isn't brittle, it starts off as a liquid so that it can be brushed or sprayed onto a surface. When it hardens in a few hours, it's almost as hard as rock. Most outdoor paints will only last a few years in the sun, but this new type of glass paint could easily survive for centuries without fading or cracking, its creator claims.

Because the paint is almost like a liquid version of glass, in addition to being incredibly durable, it also won't absorb sunlight — or heat. A surface coated with the paint will remain at air temperature even if the sun has been beating down on it for hours. In fact, the surface could actually be slightly cooler, because the paint will radiate heat from the other side as well.

So imagine sitting down for an afternoon baseball game in the cheap seats and not having your thighs scorched by a hot bleacher. Or your kids climbing on a metal jungle gym without the risk of burning their fingers. Benkoski and his team are developing their new glass paint for the Navy to use on ships operating in the direct sun all day, but painting a house with it could dramatically reduce its need for an air conditioner in the summer, or the need to re-paint it again in five years.