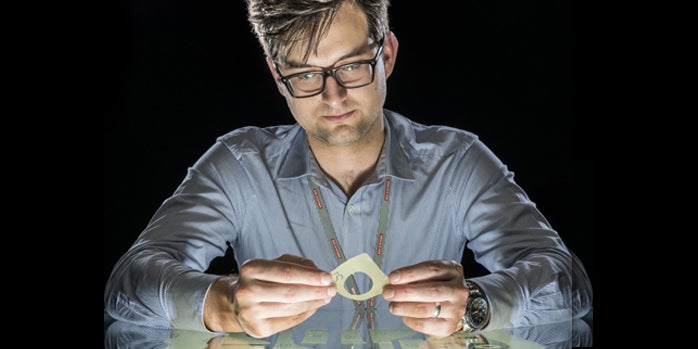 When engineers build planes, they use heavy aluminium masking tape to cover up surfaces during production. Now, engineers at BAE Systems have created a new kind of tape that leaves the surface clean when it's peeled away — and it's reckoned it will save them $US70 million.

Unlike your usual decorating-style masking tape, aerospace engineers use a heavy form of masking tape which is actually made of aluminium to protect working surfaces as they go. But the industrial-grade material is tough stuff, and its removal leaves behind a tough, sticky residue, even occasionally damning the material beneath because sharp tools are often used to remove it.

Now, BAE Systems has developed a new kind of tape that doesn't leave behind a residue when it's peeled off. Made of a light, pre-cut vinyl, the tape uses different forms of adhesive to the usual tape to make it much easier to remove. In fact, it can be peeled off by hand and, according to BAE Systems, cuts the process time for an average component from 11 to 2.5 hours.

It's already being used on production of the company's F-35 Lightning II aircraft, and it will also be used during assembly of the Hawk and Typhoon aircraft too. It's estimated to save $US23,000 on the production of each plane — creating a total saving of $US70 million over the next 20 years.

[BAE Systems via The Engineer]