What Would You Hear On The Radio If You Were Light Years From Earth? 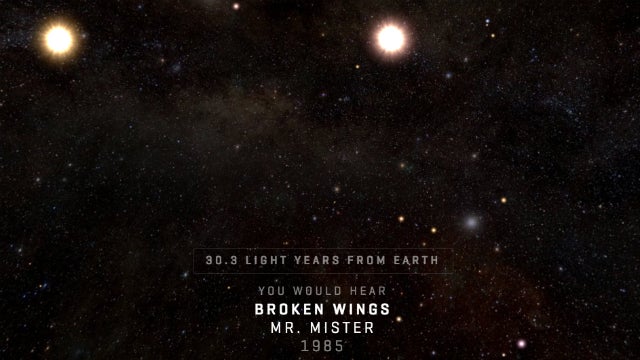 Radio waves hurtle from Earth out into the Universe. That means the older a broadcast is, the farther it's travelled into the final frontier. Now, a group of developers has built an eye-popping simulator that shows how many light years our music has travelled — and what you'd hear if you were billions of miles from Earth.

It's called lightyear.fm, and it bills itself as a "journey through space, time, and music." It was created by a team of four developers and designers who compiled 120 years of Billboard chart data that was spread over 100 lightyears from Earth. The farther from Earth you travel in the simulator, the older the songs you hear.

The team acknowledges that, in real life, terrestrial radio broadcasts fade out just a few lightyears from our music-emitting blue planet. "So take comfort in knowing that all those awesome constellations up there will never hear Rebecca Black," the team assures on the site.

Still, it's really cool to play with, and the illustrations look incredible. Click here to scope it out, and relive your middle school-era Top 40 while drifting through the void. And in case you're wondering, New Horizons followers, Pluto's currently rocking out to 2014's Trap Queen.