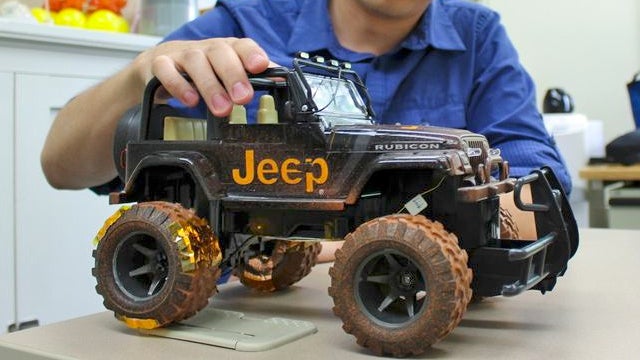 Regenerative braking systems are already used in electric cars to help recapture energy that's wasted while the vehicle is stopping. But researchers at the University of Wisconsin-Madison have also found a way to generate power while a vehicle is actually driving.

The gold foil you see wrapped around this remote control Jeep's back tires is actually an electrode that powers a nanogenerator using something called the triboelectric effect. It sounds complicated, but if you've ever generated a static charge by rubbing a balloon on your head, you've already experienced how the triboelectric effect works. 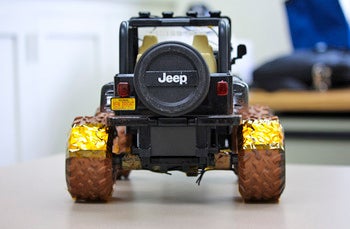 In this case, however, it's the friction generated between the tire itself and the surface of the road that generates power. It's been calculated that rolling friction actually accounts for about 10 per cent of a vehicle's fuel use, so this new approach could help reduce that and vastly improve fuel efficiency. Just how much power that can be generated is dependent on the size and weight of the vehicle, and the speed at which it's travelling. But the researchers believe that a hybrid car's gas mileage could be improved by at least 10 per cent with the tires generating additional power.

The real question, though, is whether the same technique could be applied to the soles of our shoes to help generate a charge while we walk to keep all of our power-hungry mobile devices running.

[University of Wisconsin-Madison via Gizmag]