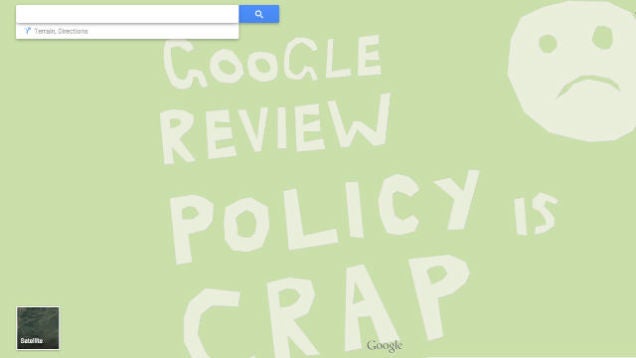 Google's Map Maker feature is coming back after getting shut down for too many prank entries. But now, Google will no longer deal with joke edits to Maps — the company is washing its pee-stained hands of moderation, shifting most of that responsibility to the Map Maker community.

Google temporarily kiboshed Map Maker, which lets people add details to Google Maps, after people inserted an image of an Android taking a big piss on the Apple logo.

The reason for this change is that every time we observed someone attempting to vandalise the map, many of you acted quickly to remove the offending feature and demonstrated real ownership for maps within your region. We have come to the conclusion that of all the defences available to keeping our maps clean, the interest of a community of well-intentioned users, is among the most reliable and fast.

"Mappers" can apply to be "Regional Leads" on Map Maker, a volunteer position to babysit other users and make sure nothing fun sneaks under the radar. By outsourcing snitching on mischief, Google can throw up its hands if something offensive gets put up on its maps.

Map Maker will reopen on a rolling basis starting in August, so get your prank images ready.