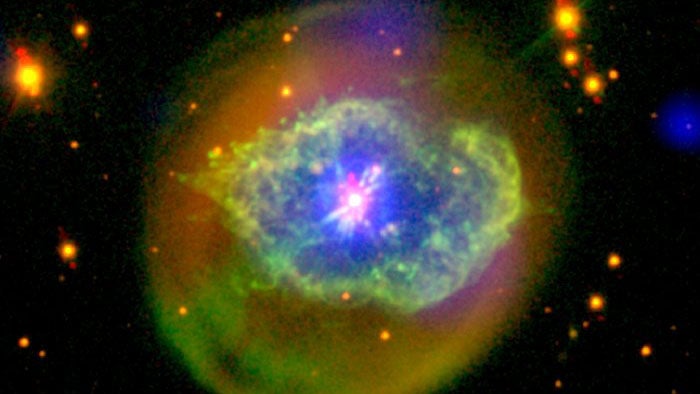 After a couple billion years, most stars with a mass similar to our Sun eventually die, shedding outer layers and creating beautiful planetary nebulas. On the outer layers of this nebula, Abell 78, a dying star had a second stab at life.

A planetary nebula is a cloud of ejected material from a star, interacting with gas and dust to create stunning rings of colour. In Abell 78, something else happened as well:

Although nuclear burning of hydrogen and helium had ceased in the core of the dying star, causing it to collapse under its own weight and its envelope to expand into a bubble, some of the star’s outer layers became so dense that fusion of helium resumed there.

The renewed nuclear activity triggered another, much faster wind, blowing more material away. The interplay between old and new outflows has shaped the cloud’s complex structure, including the radial filaments that can be seen streaming from the collapsing star at the centre.

Scientists picked up on the X-rays emitted by the superheated gas in this planetary nebula, using the ESA’s XMM-Newton space observatory. By combining that data with optical observations of Abell 78, they were able to create the above, beautiful, image.