7 Gandhi Quotes That Are Totally Fake 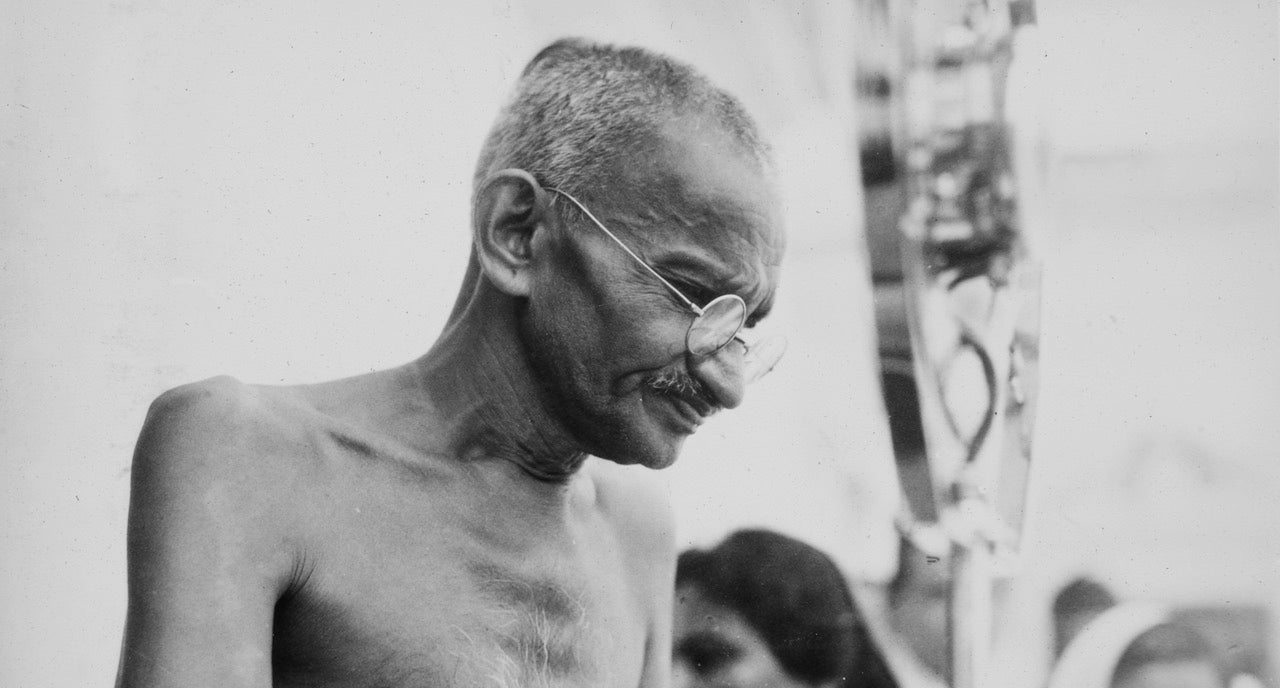 We love quotes from famous dead people. Words just sound more important when they’re coming from the mouths of important historical figures. And when we need that extra dash of moral authority, Mahatma Gandhi is one of the most quotable. But as Gandhi once said, “Half my quotes on Pinterest are fake.”


Below we have seven quotes that you may have seen attributed to Gandhi on social media recently. But they’re all fake.

1. Be the change you wish to see in the world.

This is perhaps the most famous fake Gandhi quote on the internet. But there’s no evidence he actually said those exact words. The New York Times pointed out in 2011 that the quote is conveniently short enough to fit on a bumper sticker, but it’s merely paraphrasing something Gandhi actually said:

We but mirror the world. All the tendencies present in the outer world are to be found in the world of our body. If we could change ourselves, the tendencies in the world would also change. As a man changes his own nature, so does the attitude of the world change towards him. This is the divine mystery supreme. A wonderful thing it is and the source of our happiness. We need not wait to see what others do.

In fact, the Times takes it a step further and says that the full quote gives it a completely different complexion. Personal change is indeed not enough, they argue. Whether you agree with that interpretation or not, one thing is clear: Gandhi never said the words, “Be the change you wish to see in the world.”

2. An eye for an eye will make the whole world blind.

It’s another pithy quote that definitely Makes You Think™, but there’s no proof that Gandhi ever said it.

According to the Yale Book of Quotations:

“An eye for an eye leaves the whole world blind” is frequently attributed to M. K. Gandhi. The Gandhi Institute for Nonviolence states that the Gandhi family believes it is an authentic Gandhi quotation, but no example of its use by the Indian leader has ever been discovered.

So who actually said it first? The website Quote Investigator thinks that it might date to 1914 when a Canadian politician said something similar. The first book to link a version of the quote to Gandhi was published in 1947. Called Gandhi and Stalin the author used a similar phrase to describe Gandhi’s way of thinking:

The shreds of individuality cannot be sewed together with a bayonet; nor can democracy be restored according to the Biblical injunction of an “eye for an eye” which, in the end, would make everybody blind.

From there it seems other writers morphed it into a direct quote from Gandhi. It really is a great quote, but it’s not from Gandhi himself.

Versions of his quote show up in print as early as 1867, where it is more commonly repeated as “Study as if you were to die tomorrow…” rather than “live.” Gandhi was born in 1869, making it impossible that this quote originated with him.

The quote is attributed to a handful of different people in books published during the latter half of the 19th century. One book says it comes from the Catholic saint Edmund Rich who died in 1240. Other books attribute it to a man named Ansalus de Insulis. Whoever said it first, it wasn’t Gandhi.

No, Gandhi never said this one either. This quote actually appears to come from an American labour organiser named Nicholas Klein who was making a speech at a convention in 1918:

For what it’s worth, I’m unaware of any monuments to the Amalgamated Clothing Workers of America but maybe they’re overdue for one.

This quote has actually become popular in some Christian circles to implore followers that they should “be like Jesus.” But there’s no evidence that Gandhi ever said this.

A similar quote appears to be from an Indian philosopher named Bara Dada, brother of Rabindranath Tagore. The full quote from Dada appears to be from the mid-1920s: “Jesus is ideal and wonderful, but you Christians, you are not like him.”

6. Interviewer: “What do you think of Western Civilisation?” Gandhi: “I think it would be a good idea.”

This is another incredibly famous quote that has been linked to Gandhi for decades. But it seems too good to be true.

As Quote Investigator points out, the evidence that Gandhi actually said this is incredibly weak. The first known mention of this quote is in a CBS documentary from 1967, nearly 20 years after Gandhi’s death. The anecdotal quote was relayed by the narrator rather than film footage of Gandhi actually saying such a thing.

From there the quote gets republished again and again in countless books and magazines during the latter half of the 20th century. The quote also morphs and changes over the years with some versions saying “modern civilisation” rather than “western civilisation.”

And perhaps most damning, Ralph Keyes, author of the 2006 book The Quote Verifier, says that no reliable biographies written about Gandhi include this zinger.

7. “A customer is the most important visitor on our premises.”

You may find it silly that anyone would believe Gandhi talked like a motivational speaker at a sales convention. But plenty have been taken in by it.

Do a quick search through Google Images and you’ll find the full quote, complete with images of Gandhi:

Who actually said it? The quote is probably from a VP at the Studebaker car company circa 1941. Which makes a whole lot more sense. Gandhi was many things. But he wasn’t a person known for talking about the importance of customer service to keep a business alive.

I guess someone should tell that to the author of Gandhi, CEO.