3D Fingerprint Scans May Be The Ultimate Security Tool

Compared to a password that's either too simple to be effective, or too hard to remember, a fingerprint is a great security tool. But they're not infallible, in fact, they can be easily replicated with just a photo. So researchers are taking fingerprint security one step further and scanning them in three dimensions.

The idea makes a lot of sense. Fingerprints are unique, but when only a 2D image of the print is being used as a reference, it allows for fakes to be made that can fool a sensors. But when you're capturing a fingerprint in 3D, that adds another dimension of unique data that could be very difficult to fake. Think of an art expert trying to differentiate between an original painting and a fake using just photos. It's very difficult, because examining each piece in person allows them to see differences in brush strokes and paint thickness that just aren't there in a 2D representation.

But as secure as it might be, no one will bother using the new approach if it's not as fast as current technologies, so how do you quickly scan a fingerprint in 3D? Researchers at the University of California, Davis and Berkeley have adapted the same technology that allows an unborn infant to be imaged in the womb — ultrasound. They have just managed to shrink it down to a tiny chip that can be easily integrated into modern mobile devices. 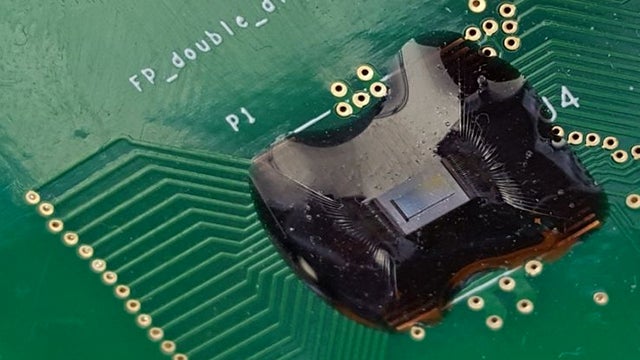 The chip is nowhere near as powerful as the ultrasound equipment that's able to see a growing baby, but it also doesn't need to be. It uses low-depth, ultrasonic signals that are able to image the unique ridges and valleys of a fingerprint and also the surface of the skin below it to generate a truly unique way to identify a human.

Will it be impossible to fool? Probably not. Scanning someone's finger against their will is still the easiest way to circumvent the system. But snapping a photograph of a fingerprint off a wine glass? Unfortunately Hollywood is going to have to do better than that when it comes to making a heist seem more believable.