Listen To The Mechanical Melody Of This Watch's Tiny Animated Bird 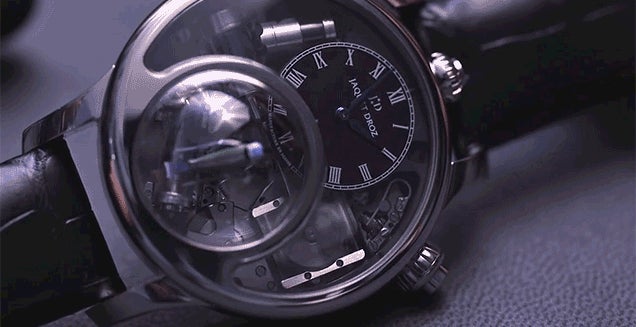 Way back in 2013, Jaquet Droz first revealed its Charming Bird watch that paid tribute to the company's namesake with a tiny animated automaton bird inside. And now, nearly two years later, we finally have a chance to hear it chirp and sing using its tiny series of mechanical bellows.

aBlogtoWatch's Ariel Adams was the first to debut the new timepiece, and now he's the first to try out the near production-ready final version. You'll want to head on over to aBlogtoWatch for Adam's exhaustive analysis of the new mechanical masterpiece, but if you just want to see and hear it in action, he luckily shot some video of the bird doing its thing.

And yes, if you're the cynical type, the Apple Watch can easily reproduce the sounds of any bird on earth. And even the $US15,000 gold model is hundreds of thousands of dollars cheaper than Jaquet Droz's $US407,000+ The Charming Bird. But all of that doesn't make this watch any less of a mechanical marvel worth our adoration for complex engineering.

Plus, it's way cooler than Siri.