How Computers Can Detect The Complexity Of Human Thought In Paintings 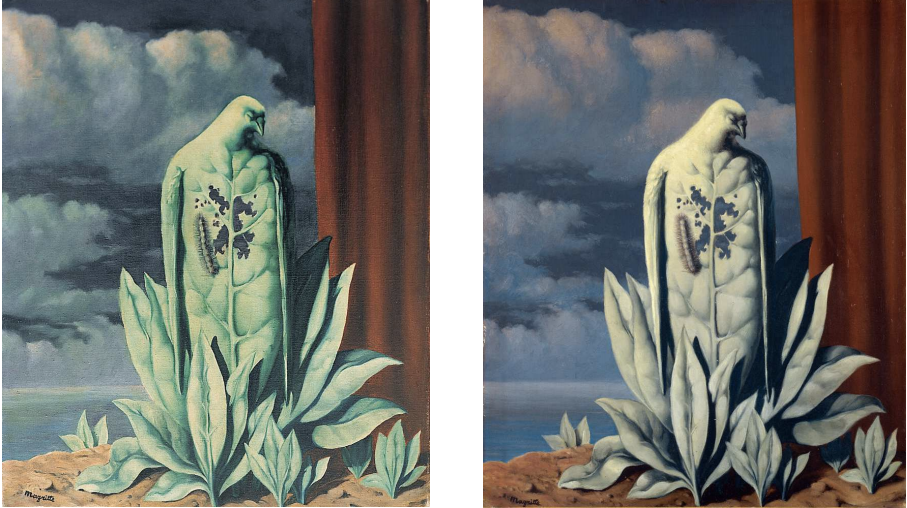 There are plenty of ways that experts identify forged artworks — from paint analysis to isotopes left over from nuclear bombs — but each is flawed in its own way. And now a pair of Serbian computer scientists say they have figured out a simpler way.

It's a common enough tale: Great artist paints masterpiece. Masterpiece, by way of war, theft or simple age, makes its way from owner to owner. Eventually, a copy pops up for auction. Or is it the original? Such is the complexity of the world of fine art collecting — and it's a problem that has spawned huge amounts of research in proportion to the huge amounts of wealth being spent on these pieces of art.

It's exactly what happened with a piece René Magritte painted in 1948 called La saveur des larmes, or The Flavour of Tears. In an interesting story on MIT Technology Review today, we learn that no one has ever been able to agree which was actually painted by Magritte. "Art experts now consider that both canvases are Magritte originals, and assume he forged his own work to make money during the war years," say the two computer scientists behind a recent study called The Artists who Forged Themselves: Detecting Creativity in Art.

But is that just an easy explanation for why two copies of this priceless painting exist? The scientists behind the paper, Milan Rajkovic and Milos Milovanovic, decided to use emerging ideas about machine vision to see whether the underlying organisation of a copy is different than that of an original.

But they didn't start with Magritte, of course. Their experiment needed a control group. So they turned to a Dutch painter named Charlotte Caspers for help. Over the course of a few days, Caspers created seven small paintings — then copied each one of them herself. Then, the scientists analysed the paintings using wavelet analysis, which uses complex processing to detect the aesthetic structure of an image — what they call "discontinuities of images."

Original and copy by Charlotte Caspers.

Were the forgeries more complex than the originals, since they require more focus, theoretically? Nope: It was actually Caspers' originals that had more complicated underlying structures.

"[C]omplexity and self-organisation are numerical quantities which could be used to differentiate between an original, creative, artistic intension and realisation from the technical process which produces a copy of the work of art," they write. "The mind of an artist is an open, dissipative system which absorbs information from the external world and produces entropy which could take the form of an artwork."

Using that data, they then analysed Magritte's mystery paintings with the same processing framework — and say the results prove that one of them is a copy:

We show that indisputably one of them has more indicators of creative artistic idea transferred on canvas, then the other so we claim with utmost confidence, that only one of them is the result of selfregulatory creative work. The other is a copy by the original artist.

Of course, they're refusing to say which is which (MIT Technology Review is challenging them to reveal it) — which is either a fantastic display of academic trolling or paranoid arse-covering. Either way, as computer vision gets more and more complex, it's fascinating to watch it reveal new things about the way our own brains and optical systems work together.