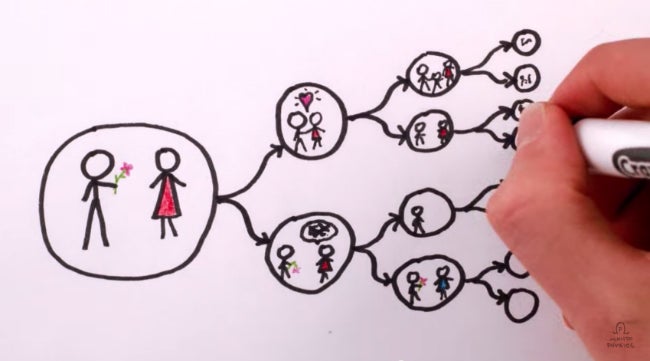 If you like the Explain Like I'm Five subreddit, which demystifies life's mysteries in layman speak (like this one about why kids eat boogers), then you should bookmark MinutePhysics. It's a popular YouTube channel that breaks down one of the more confounding branches of science by drawing cartoons with a Crayola marker.

MinutePhysics has been around since 2011, and it's creeping up on three million subscribers. The videos are bite-sized tutorials that explain relativity, parallel universes, Schrödinger's cat and other super-abstract concepts that made me feel like an imbecile in high school.

What if you jumped in a hollow tunnel in the middle of Earth? The MinutePhysics crew hypothesises what would happen:

If caught in a rainstorm, is it better to run or walk to get less soaked? (The real answer: An umbrella. Carry it.)

In which they argue pink does not exist:

And have fun with antimatter:

We can even ignore the fact that the channel name is a misnomer (most of the videos are around two to four minutes). Thanks to these little videos, I feel like I could do kinda well in a physics category on Jeopardy!. I mean, not in the Double Jeopardy round, but I've probably got a $400 clue on lock.