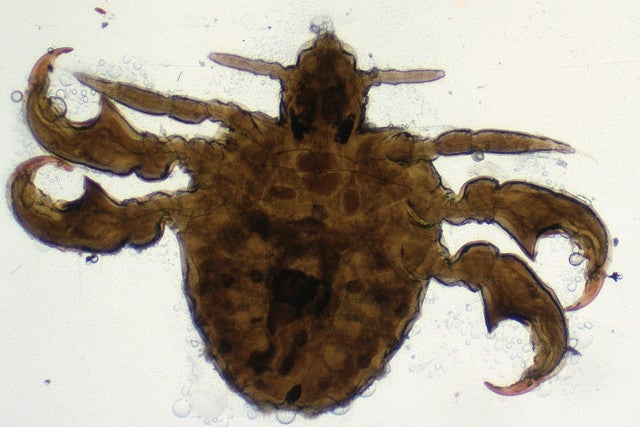 Crab lice (Pthirus pubis) aren't crabs at all — they're parasitic insects that feed exclusively on human blood and their bites can cause intense itching in their hosts. Often, this itching happens in the pubic area, which is why they're also known as "pubic lice" — which, it turns out, is actually a misnomer.

They're not just spread by sexual intercourse.

Although sexual relations are the most common way to pick up these particular passengers, any prolonged close physical contact can do the trick, including breastfeeding or sleeping in the same bed as an infested individual. A few reports have suggested that crab lice can tolerate being away from a human host for as long as 36 hours, which opens up the possibility that the lice could hang out on previously used towels and sheets to wait for a new host.

Their closest cousins live on gorillas.

Studies comparing DNA from the three species of human louse with the lice that infest other primates found that the crab louse's closest relative is the gorilla louse. Head lice and body lice belong to a completely different genus of lice and are more closely related to the lice that live on chimpanzees.

But researchers don't think that humans picked up crabs from screwing gorillas. It's much more likely that we got them by eating gorillas. Lice are very sensitive to body heat, and it's possible that way back in the distant past, some gorilla lice abandoned a cooling dead host for the warm human that was butchering it.

Crab lice certainly prefer the pubes, but their short, thick legs are just as well adapted to hang on to any coarse hair on the human body. They have been found in armpit hair, beards and moustaches, eyelashes and eyebrows. They're not big fans of densely packed hair, so they're rarely found on the scalp. But if your scalp hair is sparser than average, as in people with curly locks, they might make an exception.

Take home message? If you have a head louse infection, you only need to treat your scalp. A crab louse infection means all bets are off. Treat all of your hair. All of it.