This Image Shows Just How Much Electron Microscopes Have Improved 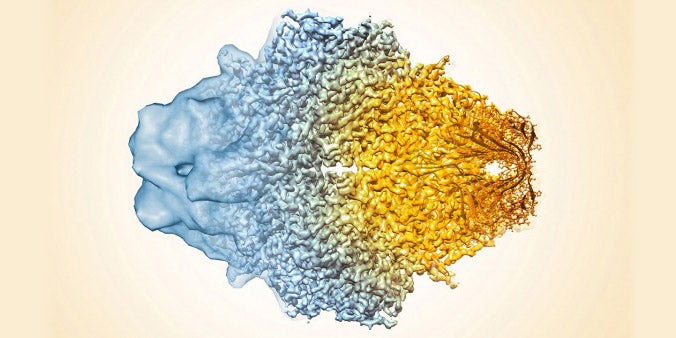 Cryo-electron microscopes are used to understand the microscopic work in exquisite detail — but until now, they have struggled to capture images at the atomic and molecular level. That's changing.

A new paper, published in Science, reveals that researchers from the US National Institutes of Health in Bethesda, Maryland, have been pushing the technique's abilities to its limits. Cryo-EM, as it's affectionately known, has recently been considered a little out of date, capable of achieving resolutions of just 0.5 nanometres — comparing badly to other modern techniques for seeing the microscopic world, like X-ray crystallography which can manage 0.2 nanometres. At 0.2 nanometre resolution, individual atoms come into focus.

But the team from the National Institutes of Health has pushed the technique, which sends a beam of electrons at a sample previously quench-frozen in liquid nitrogen, further. Using advances in electron beam generators, detectors, and imaging analysis, they have created a cryo-EM technique which can achieve resolutions of 0.22 nanometres, which is almost as good as its more fashionable rivals.

The image at the top, of the protein β-galactosidase, shows how far the technique has come over recent years. At the left is the level of detail which earned cryo-EM the rather cruel nickname of "blob-ology" in the past; on the right is the kind of imagery that the technique can now achieve. While it doesn't resolve single atoms, it does make it possible to identify the water molecules that bind to the protein. Clearly, you can teach an old dog new tricks. [Science via Science]