The Himalayas Dropped Almost A Metre After The Nepal Earthquake

The earthquake in Nepal was so violent it moved mountains. Satellite imagery shows that the parts of the Himalayas sank three feet (91cm) — and the area around it as much as five feet (152cm) — as tectonic plates snapped under extreme pressure. But the mountains will regain their height, slowly but surely, thanks to the geologic forces at work.

The European Space Agency's Sentinel-1A radar satellite captured before and after images of the area hit by the earthquake. The image below show how the Eurasian plate bent, the land falling in some places (yellow) and rising in others (blue). The area of the Himalaya's Langtang range sank by three feet (91cm). Everest, which was further away from the earthquake, sank about an inch (2.5cm). 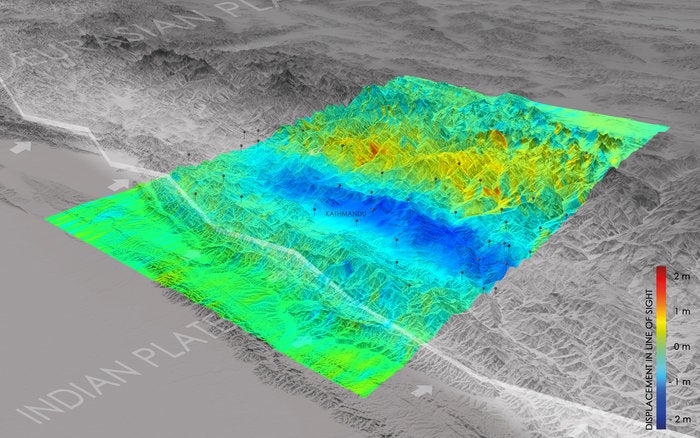 The Himalayas were formed, after all, by the Indian plate pushing into the Eurasian plate. And the mountains are still growing thanks to the constant pressure at the fault. In the earthquake, though, the plate under Kathmandu snapped like a rubber band, causing the opposite to happen. Tim Wright, professor of satellite geodesy at the University of Leeds, explained what happened to the BBC:

"Between earthquake events, Nepal is being squashed and the part (including Kathmandu) nearest the big fault underneath it is being dragged down by the Indian plate, and [areas] further back are being lifted up as you imagine squashing something is going to push things up," says Prof Wright.

"Now, during the earthquake itself what happens is the opposite. The part that was dragged down because it was stuck at the fault - that slips freely and rebounds up, and the part that was being squashed upwards drops down."

Picture: The Langtang range of the Himalayas. Sudan Shrestha/Creative Commons