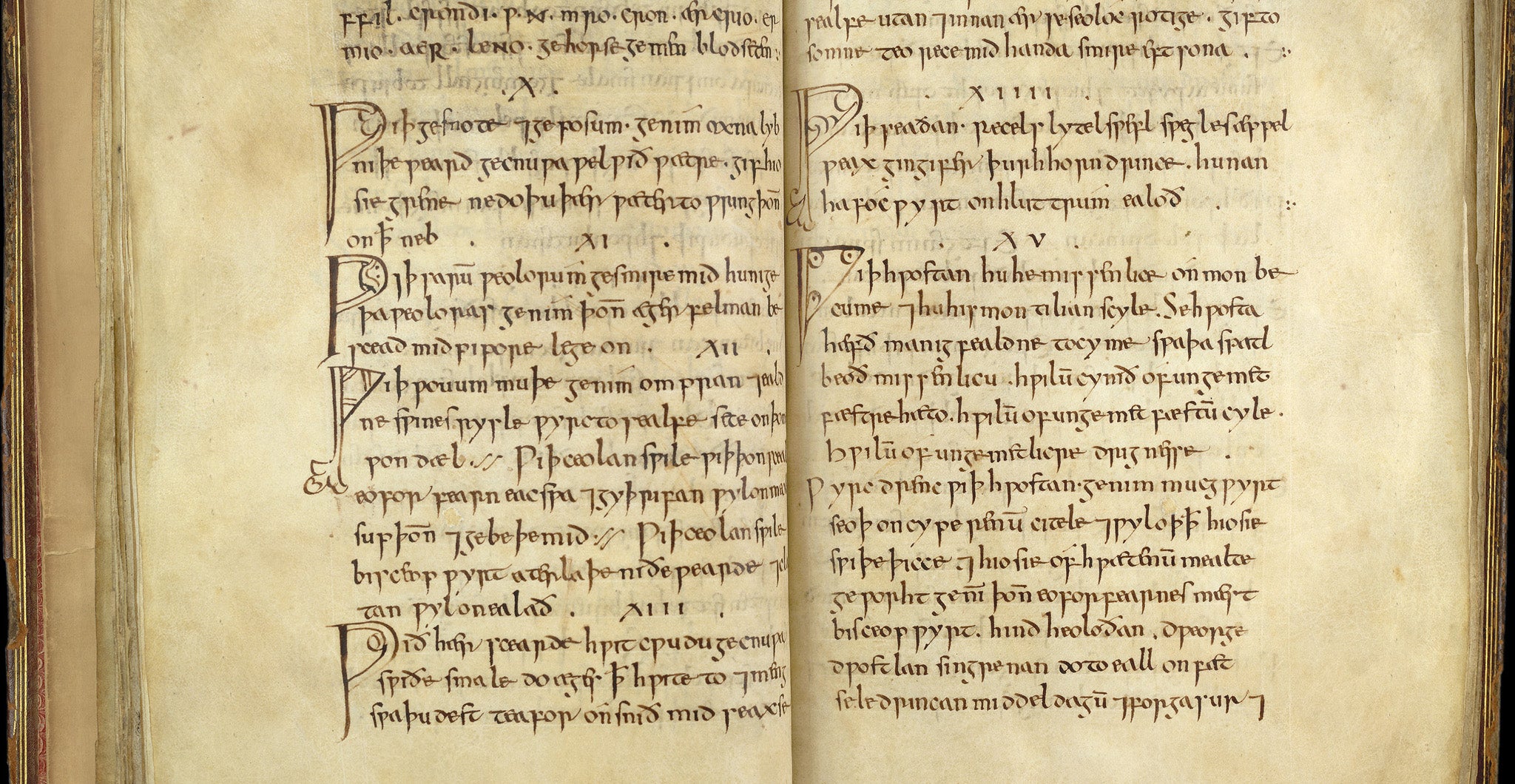 Last month, a microbiology lab in Nottingham, England made international headlines when it unearthed a substance that kills methicillin-resistant staph, one of the deadliest superbugs of modern times. The most astounding part about the find? It was a 1000-year-old Viking potion.

"This is something we never, ever expected," said Christina Lee, the Viking scholar at the University of Nottingham who translated the recipe from Old English. "When this tested positive against MRSA, we were just bowled over."

Bald's eye salve, intended to vanquish a stye, was discovered in Bald's Leechbook, an Old English medical primer that hails from 9th century England. The recipe, which claimed to be "the best leechdom" in existence, caught the eye of Freya Harrison, a microbiologist at the University of Nottingham who moonlights as an Anglo-Saxon warrior on the weekends, as a member of the UK's oldest and largest Viking reenactment society.

"This all kinda started from me being a big nerd," Harrison told me over Skype. "When I met Christina, she was eager to talk with a microbiologist, because she has an interest in the history of infection. One of the things she had always wanted to do was test some of these medieval remedies out, to see whether they actually work."

Together with microbiologist Steve Diggle, the three pooled resources to begin the "AncientBiotics" project, which would identify promising Anglo-Saxon remedies and test their medicinal value using modern science. They never expected their first attempt at replicating a medieval potion would be such a roaring success.

"To be honest, I didn't think anything would come of this," Diggle, whose interests lie in bacterial communication and evolution, told me over Skype. "For me, one of the most interesting aspects is asking whether this was a true scientific attempt at a recipe for treating an infection. If so, that completely changes our perspective on Anglo-Saxon medicine."

Medicine in the Middle Ages

Medieval medicine is generally perceived to be little more than quackery — at best, useless, and worst, a death sentence in itself. We picture doctors bleeding patients to dispel ill humours, or drilling holes in a their skulls to release evil spirits. And we picture the Black Death, images of the sick and dying living out their final days in isolation, towns lined with massive pile of festering bodies. All in all, if you got sick, you were basically screwed. Right? 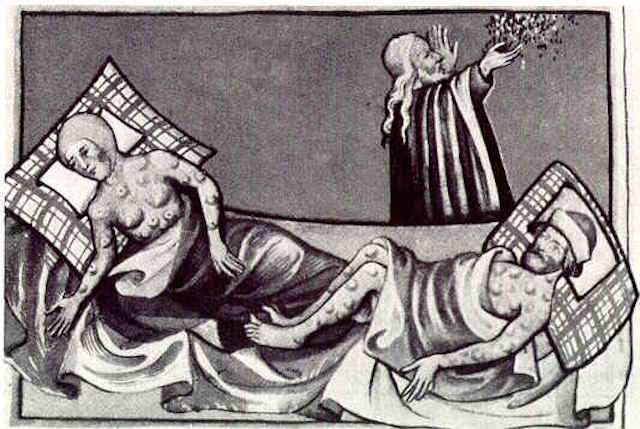 Lee, who's been studying Anglo-Saxon medicine and burial rituals for years, suspects that the reality might have been more a bit more complex. During her PhD studies, she visited a number of Anglo-Saxon cemeteries, where she was surprised to discover that diseased bodies were often buried with an enormous amounts of care.

"That finding really blew me out of the water," she said. "I grew up with the idea that sick people were just discarded during this time. But when I saw cemeteries where people with advanced leprosy were given very good burials, it got me thinking maybe it wasn't all so bleak after all."

During the Middle Ages, infections were one of the primary killers. Untreated cases of pink eye led to blindness, minor flesh wounds became gangrene, and child birth was, as often as not, a death sentence. We hadn't a clue what caused these afflictions, but still, people tried their best to come up with treatments. One of the most prominent medicinal compendiums of the 9th and 10th century is Bald's Leechbook, compiled under the auspices of Alfred the Great and circulated in Winchester, on of the largest Anglo-Saxon cities of the time. Within the book's pages are hundreds of treatments, for everything from headaches to impotence to paralysis. 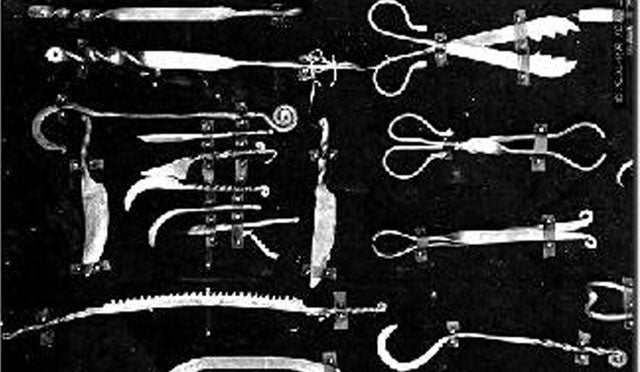 While some of these remedies reek of BS (one, for instance, describes pounding a charred wolf's skull to a powder and applying it to sore joints), many require nothing outlandish at all, and what's more, contain ingredients that are know today to have antimicrobial properties. Early on in their discussions, it became clear to Harrison and Diggle that some of these recipes might have potential.

"If you think of woad dyeing, and you actually look at the process involved, it was quite complex," Harrison said. (Woad, a flowering plant from the Caucuses that produces a vivid blue pigment, was a staple dye throughout Europe during the Viking age.) "You needed very specific redox chemistry to get the desired result. If you look at steel making technology, that didn't get any better until the industrial revolution. Now, if people could make those things through empirical research, why couldn't they have put combinations of ingredients together and found medicines that actually worked?"

Work an eye salve for a wen, take cropleek and garlic, of both equal quantities, pound them well together, take wine and bullocks gall, of both equal quantities, mix with the leek, put this then into a brazen vessel, let it stand nine days in the brass vessel, wring out through a cloth and clear it well, put it into a horn, and about night time apply it with a feather to the eye; the best leechdom.

"This recipe specifically says it's for a lump in the eye, which to us, clearly suggested it was used to treat a stye," Harrison said. "In the modern world, about 90 per cent of sties are caused by the Stapholococcus auerus." This gave the researchers a clear target to test the potion against. The ingredients themselves — cropleek, garlic, wine and bullocks gall, or cow bile — were another selling point. 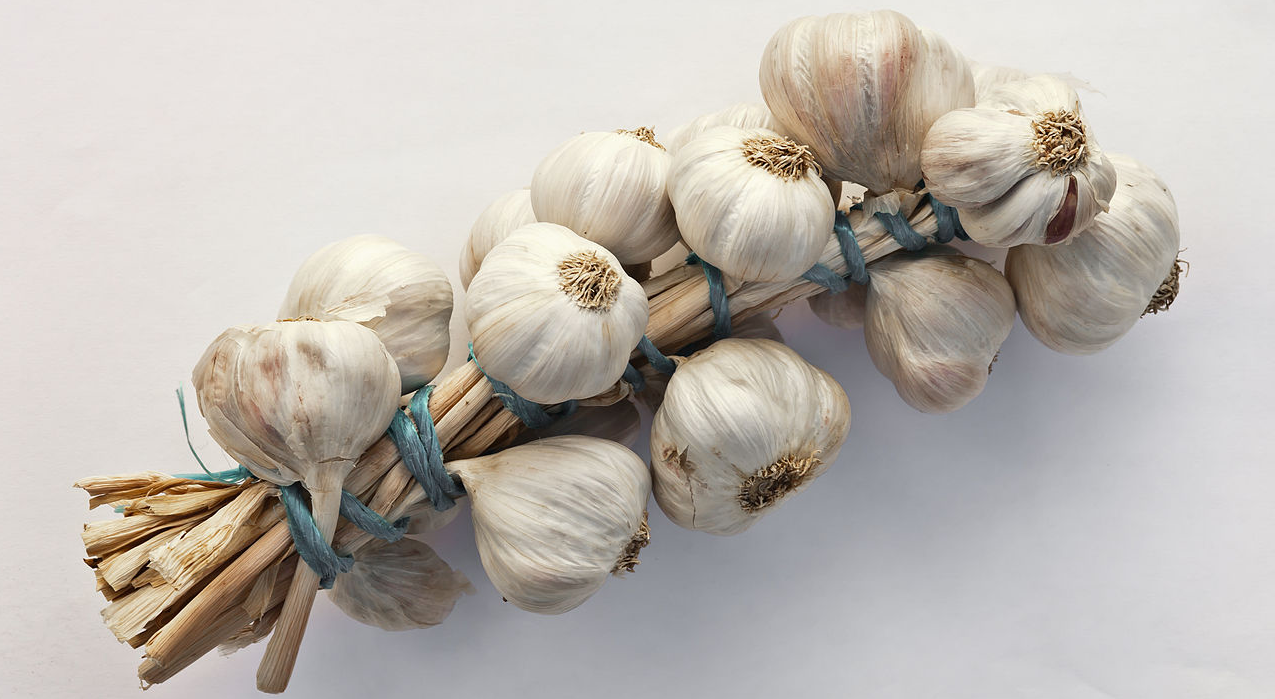 "People have done a lot of work on garlic extracts for their antimicrobial potential, and there does seem to really be something there," Harrison said. "One of the things bile salts do is prevent bacterial overload, so again, a possible antibacterial. Alcohol could act as a solvent, and then you have the fact that the whole thing has to be left in a brass or bronze pot."

Copper, it so happens, is also an antibacterial agent.

"Every single ingredient in this recipe had evidence of antibacterial activity," Harrison said. "By combining them, are you getting something that's greater than the sum of its parts?"

To find out, the researchers set about recreating the potion. Sourcing authentic ingredients was a major challenge, since many crops have been hybridised or altered through selective breeding programs over the past thousand years.

"Take the wine," Harrison said. "Virtually all wine grapes have now been hybridised with a North American variety, so they're different than what people had in the 9th century. So we decided to focus instead on making sure the geology was correct, since different soil minerals can affect what's in the wine." In the end, the team found a historic organic vineyard six miles from the site of a 9th century vineyard, and purchased a vintage bottle.

"Cropleek" was also a bit of a head-scratcher. The word is thought to refer to an allium species, the genus that includes onions, garlic, shallots and leeks. Which specific onion-plant, however, is not known. In the end, the researchers fixed on leeks and onions — both of which produce flavanoids, a class of molecules that might also possess antimicrobial properties.

In some ways, ox gall was the most straightforward item on the list. "We obviously didn't butcher a cow, we bought it from a chemical company," Diggle said. "Even so, Freya had to have a long talk with the people at technical support about the concentration in the cow's stomach."

Instead of cooking the potion up in a bronze pot, which would have been difficult to sterilize (and expensive) the researchers cut up strips of bronze and placed them inside glass bottles. After nine days of stewing, the slimy, garlicky paste was self-sterilizing, and would kill laboratory strains of Staphylococcus in liquid media. Next, they tested it out in a more realistic wound model, a biofilm of staph grown in a semi-solid agar gel. When the potion still killed everything it touched, it began to dawn on the researchers that they might have stumbled onto something big.

"We were seeing four to five orders of magnitude drops in the number of staph cells in our wound model," Harrison told me. "We were pretty gob-smacked when we saw that happening."

At that point, they called a up colleague at Texas Tech University, who tested the potion in actual mouse tissue, again with phenomenal results. Finally, they decided to test it against the thoroughly modern and drug-resistant MRSA strain. Sure enough, it brought swift death to the hardy bugs.

Drugs for the Future

Even with all the buzz their potion has generated, the team is cautious not to label their discovery as actual medicine (the paper that details these findings is still under peer review). The discovery is exciting, but the potion hasn't even made it to clinical infancy yet.

"We're not yet saying it's an antibiotic," Harrison told me. "It does have antibiotic activity, but whether that is something that could go to the next stage of development and treat a real infection, we don't yet know."

Moreover, they still have no idea how Bald's eye salve actually works. 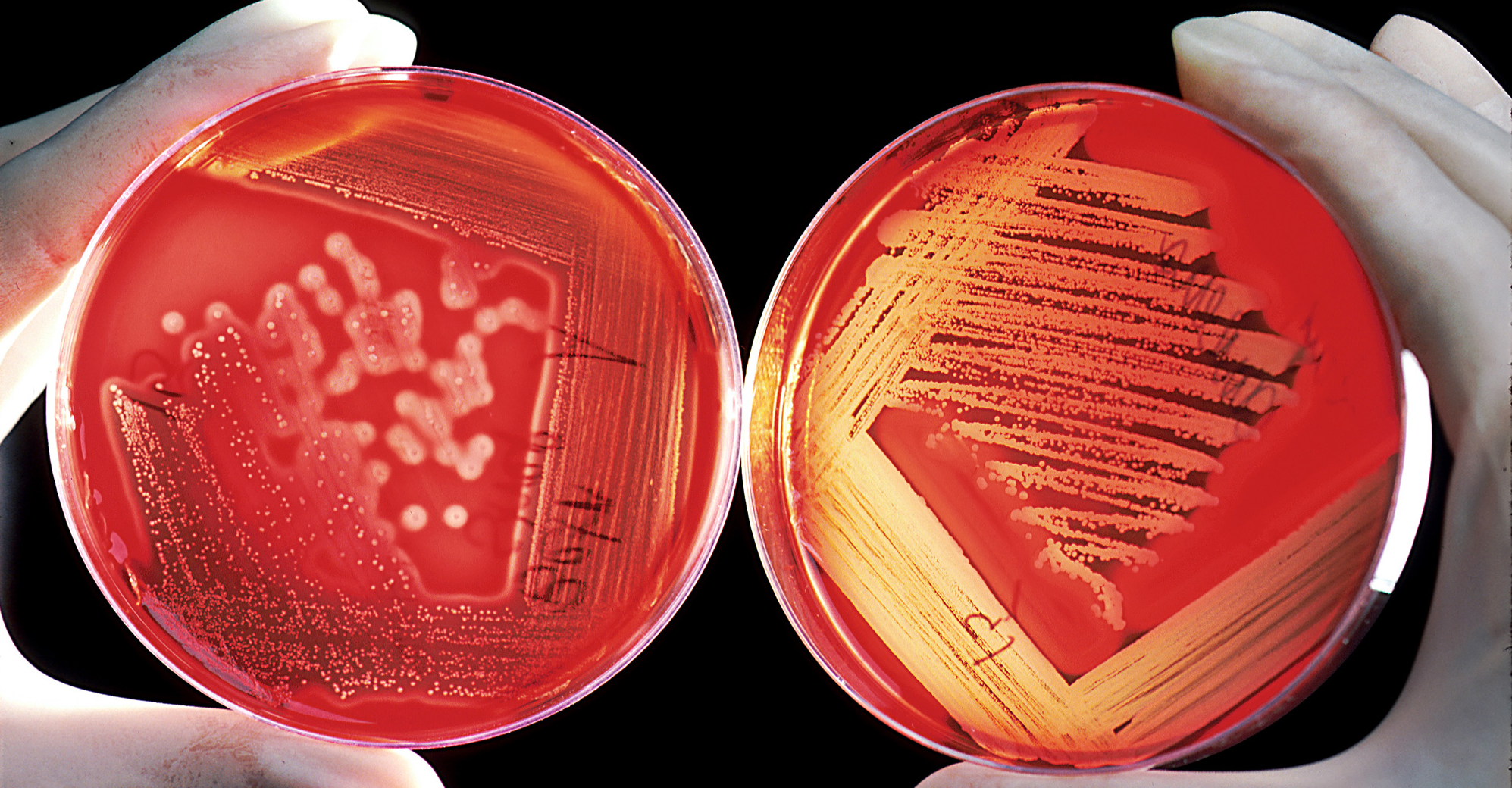 "What we found is it's the combination of ingredients that are effective — when we dropped ingredients out, it didn't work anymore," Diggle said. "Now we need to start collaborating with analytical chemists, identifying the active compounds and determining how they work together."

Still, the team is already considering testing more potions from Bald's Leechbook and other medieval texts. A logical starting point is to search for other recipes that harbour similar combinations of ingredients — garlic and wine, for instance. But some completely different recipes have also caught their eye: A treatment for paralysis, for instance, calls for birch bark, which contains a possible cancer-fighting compound.

While all of the recipes the group is investigating are in Old English, some are translations from classical sources. These are also a high priority, having been passed along for many generations.

"There has been this persistent idea that Anglo Saxon medicine was pointless," Lee said. "What this shows is, there may be more to it than we thought."

Diggle agrees. "There were really smart people back then, too, and there's no reason they couldn't have been developing things that actually worked."

"You know, I always think that in 200 years, folks will be flabbergasted that we radiated people for cancer," Lee told me. "We just have to remember that people back then were desperate, there was a need to help and they wanted to help. It tells us a little about their lives and reactions, and that they're not so different from us."

Which is to say, while we've been accidentally killing people in the name of medicine for thousands of years, we've also been amazing breakthroughs along the way. And personally, you don't need to tell me twice to consume more garlic and wine.